Apologies to regular readers (who am i kidding) but i've rather neglected the blog of late.Actually, my fishing has not been  particularly successful and not for the want of trying.
On the pike scene, i had two or three more trips to one of my regular spots(one in March snow!) and , apart from a couple of smallish pike, caught very little of note.
Piking buddy Dave had better results on seperate trips with a new p.b from our favourite stretch of 27lb-a superb pike.Still on to the subject of coarse fishing i had a totally unproductive day trying to catch perch from a local commercial fishery-bit too crowded for comfort for me this one but at least i was fishing.
On the boat fishing front, I had a couple of trips east  to Shoreham marks chasing plaice,one of which produced a few fish but could have been better had i moved slightly further south where one of our local charters was doing better.The other outing, in a horrible easterly wind actually resulted in a complete blank and the consumption of a full tank of fuel for about an hours fishing.Thankfully, complete blanks are rare in the boat.
I took my mate Brian, a neighbour at the marina, on a wrecking trip on a day when the weather co-operated and, although it was extremely enjoyable and interesting scanning and drifting various medium distance wrecks, apart from a few plump pouting only one fairly decent pollack turned up to Brian's lure.
A few boats , mostly charter, were having some success with local plaice and, when i eventually stumbled across the mark discovered it was an old favourite of mine at #13. I had no idea of the marks heritage as a plaice venue and learned later that it had been trawled in recent years and only just returned to its former potential.I had one fairly successful outing,but generally missed most of the action due to being unable to get out on the better weather days . My biggest mistake was turning back one day due to a bumpy sea, which soon turned to a flat calm. By then i was back home in my living room,watching the conditions improve by the minute.
Generally the weather conditions have been 'difficult' and with lower than average sea temperatures, the species are turning. up a little later than usual this year.
So although the fishing has been rather lacklustre, i haven't been idol.As well as being allowed by SWMBO to convert the spare bedroom into my fishing room, I've been furthering my research into the possibility of catching a shark from my own boat.
I had a very productive meet with Wayne Comben-captor of probably the biggest ever porbeagle shark caught from British waters , and taken last year from a 17ft Wilson Flyer belonging to Graeme Pullen. Wayne and I have agreed to do some fishing together this season, possibly an attempt at some local shark.
I also had a short trip out from Ilfracombe in a 27ft boat owned by mate Nick (Mr. Pix on WSF) . Nick was kind enough to show me some local marks and we also looked at the prospects of a run down the coast to some shark marks in North Cornwall.
One minor glitch with 'Jupiter' has been a split fuel line caused by some pretty bad design and routing under the Suzuki engine cowling. Luckily i spotted the problem at the pontoon but had to drag her out on to dry land to remedy the situation safely with a completely new, and more robust fuel line fitted. I could have kicked up a fuss with Suzuki or indeed Warrior as its all warrantied but to be honest, i couldn't be bothered and just wanted the boat back in and working as soon as possible.
At least it gave me the valuable opportunity to familiarise myself with my engine.It was an easy fix but I'll be keeping a close eye on that fuel line in the future. 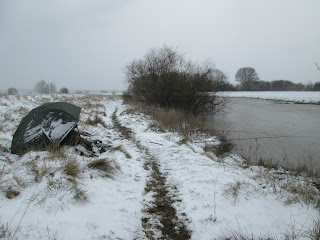