after a prolonged spell of rough weather to score on the reefs with lures. However, I had to find that out for myself really.
I took Andy along for the ride on this one , an afternoon experimental session, and his first run out in 'Jupiter'.
Starting off with jigged soft plastic lures on my newly found and favourite reef mark, there was a bit of 'fishy' presence on the finder and Andy immediately picked up a bass on the first drop which served to increase my confidence levels.
However, after that, things got more difficult.
Water clarity wasn't brilliant,and  although a couple more bass showed,along with some wrasse(ballan and cuckoo) and pollack on lures , it was hard going.
Moving to an alternative mark which i'd been kindly donated and was in need of investigation and again, it was obvious that fish were present but not interested in our plastic. I suspected bream so we anchored up and this indeed proved to be the case with three reasonably sized fish to 2lb hitting my squid baits on consecutive drops.It wasn't set to last and as the tide slowed to nothing the bites turned from bream to dogs and didn't improve when i repositioned the boat and the tide started to run off. However it was a useful exercise to scan the mark and make a few notes for future trips.
We finished up with another spot of drifting and a few more small ballans to end a pleasent afternoon in the sunshine.Not exactly blistering fishing but crew was happy with his first reasonable bass of the year which put a smile on my face.
One of the bass had regurgitated what appeared to be ragworm and i was to later find out from Neil that during periods of rough weather the bass move off the reefs and feed on open ground on ragworm and that they will return to the reef  after two or three calm days.I was a bit premature!! 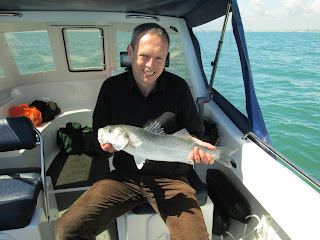 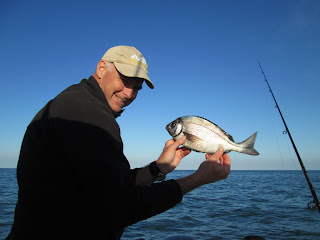