Although my angling career started in coarse fishing, mostly on the River Thames and Surrey lakes, I rarely, pike fishing excepted, fish in freshwater nowadays. But with strong winds preventing me from getting afloat and wanting to wet a line, it was the right time of year to have a tench 'bash'.
Chichester Lakeside complex is a very old collection of gravel pits that i visited for the first time in the mid 1970's as a spotty teenager.  It's changed character somewhat over the years from its heyday as a very pleasant coarse and trout fishing venue, descending in the late nineties and 'noughties' to a litter strewn dump and finally coming full circle in recent years and recovering something of its former status as a quality coarse fishery.
Nowadays the spring fed pits are sympathetically managed and bear little resemblance to the heavily stocked 'commercial' fisheries that have become so popular in the coarse angling world.
The trout lake-'Peckham's Copse', is long gone and most of the waters are now inhabited throughout the year by bivvy dwelling carp anglers however, some of the pits, those left alone by carpers and relatively lightly fished, are now recognised as some of the best tench waters in the south of England, particularly with the 'Tenchfishers' society, and have double figure plus specimens present.
Whatever, they are very pleasant lakes to fish and for me,  as 'natural' a still water environment to be found in this part of the country.
Last year i had some success on Deep Lake so decided to return again for a few hours this afternoon to commence this year's spring campaign .It still feels strange , after all these years, to be fishing for coarse fish outside of the traditional season but, those in the know tell me that spring is the best time for these tench and once they start to spawn, usually sometime in June, the prime sport has passed by.
Tactics were simply semi-bolt maggot feeders with a short hook length, size 12 hook with two red or whites as hook bait and an imitation maggot to make the hook rig neutrally buoyant.  Scientific stuff but, its actually very simple and works a treat especially as there appears to be few small silver fish present. Emerging lily beds were targeted with the feeders, refills going out every twenty or so minutes. 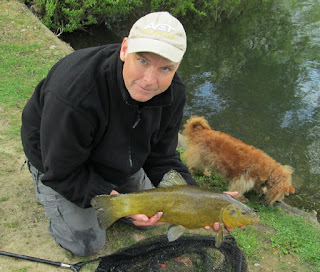 Things were quiet at first but as the afternoon light faded slightly, the swims switched on, though with very few 'liners' to give away fishes' presence. I landed three tench, 4-00,4-06, and 5-08.A couple more slipped the hook, one broke a hook!, and a scale perfect common carp of about 10lb also let go at the net, but not after I'd got a good look at him in the gin clear water.
I chose to use a 15lb fine braid mainline and this proved to be a wise choice as , modest in size these tench may be, they still have the ability to fight hard, and all took me straight into nearby snags-hence the multiple losses. A double figure fish would be interesting. 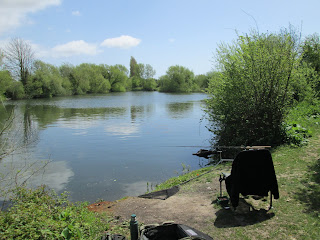 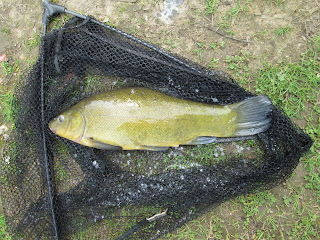 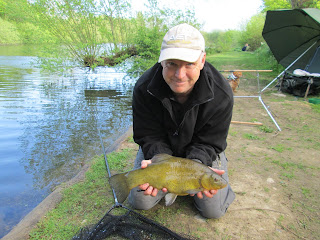