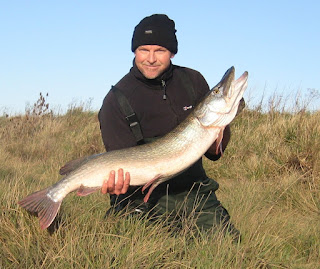 It's too windy to go and play with boats so , with dog in tow,I decided to investigate the state of the river following the recent rainfall, and whether it was feesable to have a crack at some pike. Stopping off at a convenient bridge on the journey up, it didn't actually look too bad. It was quite high, but the colour was dropping out so, i decided it was worth a try.
Although a crisp N.W wind was blowing in my face, it made a pleasant change for it not to be raining, and i settled back into the routine that is winter pike fishing on the rivers-not expecting too much, but always anticipating.
I chose to ignore the productive stretch from last season and , having had the luxury of finding a new access point afforded by some rather convenient parking, headed instead for the centre of the stretch.
The first take came on a sardine but unfortunately didn't stay attached for long enough for me to get a look- I suspect an upper single was the culprit and, at least it was an indication that they were feeding.
Very little else happened, as I hopped the rods along, until about lunch time, when the float with a big roach underneath it,  began to fidget.A proper run didn't really materialise, but i quickly tightened up anyway, and immedieately knew that I'd connected with something a bit special.
The pike chose to fight very close to the bank and proved quite lively and difficult to control initially.However, after a couple of aborted attempts to get her netted(one of which was thwarted by the dog wanting to play in the net himself)she slid in and was mine.
Definitely big enough to 'tube' and set up a self take shot with the camera, i weighed her in the net and she went 23lb 2oz .
A truly beautiful pike in tip top condition-my fourth '20' from this river and my biggest for quite a while.( I didn't get a twenty last season)
The dog stayed well clear during the quick photo ceremony, and the pike was duly slipped back successfully, and chose not to hang around in the shallows.
I stayed on for a couple more hours but, the temperature started to drop significantly and anyway, It was 'job done'.A few more like this wouldn't go amiss.
Posted by Unknown at 11:56