My last trip out saw some serious cod activity for John on 'Sarah Louise' with two big fish, in the upper twenties,caught from the '*'.
I'd been advised that today's 5.6m tide might be a little too much for the mark as it's around 70-80 ft deep but, having started out near 'black ledge' and been plagued by channels and dogs, i chose to up anchor and head out there over the slack water period.
Having reached the mark John, was again in attendance and picking up a few of the intended target-big ones too. 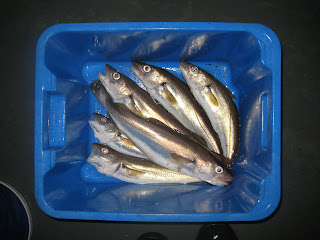 Naturally, I just managed to catch more whiting(nicer ones this time to about 2lb) and dogs but another piece of the jigsaw falls into place and , with the extended range available with 'Jupiter', its now feesable to fish these 'far off' places.
Posted by Unknown at 05:09