A rare (for this year anyway) mullet trip for me to the Hamble and Mercury marina which, in the past, has been a big favourite of mine for relaxed mullet fishing due to it being almost like a 'stillwater' venue.
Dave joined me for this one on a cracking day weather wise and the mullet were there in good numbers.We started on the float placing the baits perilously close to the moorings and i managed to score this thickie of a couple of pounds and a lively goldie not that much smaller.
Dave added to the tally with a goldie for himself, I believe his first, before we moved along to 'the beach' swim and set up leger rods. The only action here being a lost fish to me which felt reasonable-who knows.Nice to do a bit of mulleting for a change and probably the only time, this season, I'll fish for them anywhere other than the Arun.
Only four mullet for me this season - the smallest number in a season that I've caught since starting out for them thirteen years ago-how times have changed. I suppose there may be a chance of a few more encounters yet though i have to say, with our annual holiday only days away, and October looming, I'm actually starting to think about pike again. 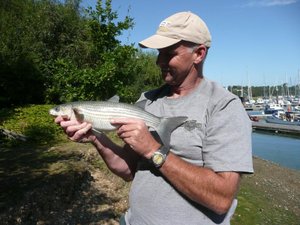