I was disappointed not to have been with my mate Andy last week to photograph his double figure bass for him, having not, at that point in time, caught or even seen one myself............
Yesterday morning we experienced the heaviest storm of the winter so far which was accompanied by some seriously spectacular seas around HW .I'd been out cruising along the sea front in the 'firm's car' using the company's time wisely,by checking out the conditions, when It dawned on me that, with all this bass food being stirred up, I should phone Drew and arrange a session at L.W for tonight. It turned out that he'd been thinking the same. Great minds...........
The wind had steadily tailed off throughout the afternoon but, when I arrived home from work in the evening,I could still hear a decent surf rolling in at the back of the house, though of course,in the darkness, I couldn't see it.I picked Andy up at about 6-30p.m, we headed out west, and were in place by about 7-00.Today's L.W was at 1816.Conditions were just perfect.The wind had dropped to a mere 'breath' but, there was indeed still enough movement in the water, and the sea and air temperatures felt warm enough to Instill confidence.
My chosen rig was a whole squid on a 6/0-4/0 pennel(I don't take prisoners) on a running paternoster, and Andy had a mackerel strip on a 3/0(a more delicate approach) for the first chuck, but was to switch to squid for the remainder of the fishing.
Within minutes of starting, and both on our first casts, Andy signalled that he'd had a bite.....and was in......Just seconds after, I had a strong thump and I was In too.......... and..........., it felt like a good fish.Two good bass on at the same time.....this would be fun!
Our baits had been quite close together, the idea being to concentrate a scent in the water(teamwork), and it soon became apparent that Andy's fish had kited over my line(the cheek of it !).Things did get a bit confused at this point as it seemed, in a bit of a 'comedy' moment, that we were possibly fighting the same fish.My line was still out, but looped round Andy's, and as he'd played his fish in to our feet,and could see that it was a good'n, we both decided to start the 150yd 'wade' back to shore together, without untangling my line first, as we didn't want to lose Andy's fish.
As we moved back a few yards the weight on my line still seemed heavy. I thought that perhaps I was just dragging weed or the lead was snagging...but I wasn't entirely sure.I suggested to Andy that we free my line and, as soon as we'd done so, I was back into fighting my fish...I've made worse decisions.
The bass came in relatively easily, though feeling quite heavy on the light estuary rod, and as she appeared out of the darkness, we could both see she was something special.......'You've got a double there mate'.... P.P exclaimed.
Finally reaching 'dry' land ,we laid both bass down together on the sand and, as you can see , it was a splendid sight.What a brace. Quickly weighing and individually photographing each fish, we were both keen to get them back unharmed, and this indeed was successfully achieved. I must have followed mine out for 75yds or so to see it safely back.
P.P had forgotten his beloved tape measure, but luckily, I'd remembered to pack my scales.Andy's fish weighed 7-04 and mine 10-10, both fantastic fish, my first ever double figure bass and 'catch of the year' without a doubt.I was over the moon.
Second cast produced another lesser bass for me at 3-12 and my third cast gave me a dropped fish, both takes being preceded by the slightest of knocks.As the tide flooded,and the depth increased, we both felt that the surf conditions were deteriorating but, there were still fish feeding and Andy concluded the session, and balanced the numbers, with another nice bass of 4-12 taken home for a well deserved meal.
We did have an additional 'comedy' moment during the sesh' when Andy's hands had become too cold to delicately thread a frozen squid on to his fine wire 3/0.Gallantly, I offered my assistance, only to remember that my eyesight at closer than a yard, is total pants-hence the reason for my use of giant viking hooks.
I doubt whether we had half a dozen casts each, and were fishing for just a couple of hours, but it was a truly memorable session and one of many that Andy and me have had this year.What with last month's success on lures....Lady Luck has definitely been on my side this season. 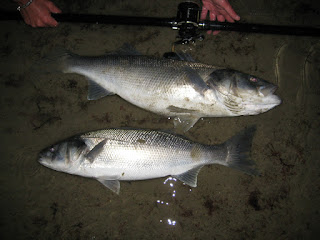 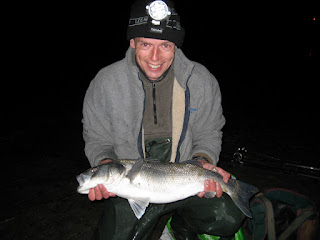 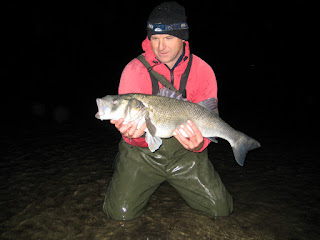 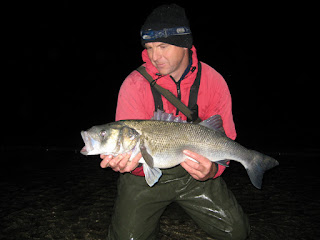 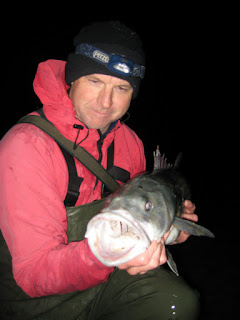