After the disastrous trip to the Broads(I'm still reeling in pain) it was high time to get back into the fish, and get busy on the Sussex rivers, where the pike are unlikely to have ever seen a bait, let alone been caught.,...........and the closest angler(apart from your mate) is likely to be miles away. I like that!
I had set aside this morning for a possible trip out in the boat after cod, but the winds were strengthening from the north, and acting on Rusty's advice to pick the best times ,weather wise,to venture out at this time of year,I decided to cancel and instead, head up the river after pike.
Having returned home this lunchtime, I think it was, with hindsight, a wise decision, as the sea looks decidedly lumpy a few miles out. However, Rusty's been doing extremely well lately with cod, and i'm eager to follow in his footsteps and get my first fish aboard.There has also been some bass action drifting over the Kingmere to whet my appetite but, for the moment, i'll just have to be patient, and wait for a suitable window of opportunity.
Seeing as I was due to take Andy out, I let him decide on a venue for the morning's fishing and, rather pleasingly, he chose Ham Corner.This remote stretch of the river has produced a double figure pike for me in the past, albeit from a boat,and I've been meaning to return for a couple of years. It's also the lowest point on the tideway at which I personally have taken pike .
We parked the truck up at about half seven,but rather disappointingly, the gate to the long chalk track leading close to the river was locked, and I was unable to play silly buggers with the 4WD lever.She's still a 'mud' virgin in my hands.
Shanks' pony was the only option, and we were fishing before eight-two rods out both on trusty float legered sardine for me, and Andy fishing one rod for the pike, and a bread feeder for whatever might pop along.The water conditions couldn't be better. The colour had dropped right out after the past few days of cold, dry weather and the level was spot on. Tide was ebbing strongly and there were plenty of small fish topping-in fact the place seemed quite 'alive'.I must admit, despite the bitingly cold northerly wind, I felt quietly confident.
We worked our way downstream from the culvert entrance, hopping the rods every half hour or so and fishing in an average of ten feet of water, a couple of rod lengths out.
Dead on slack LW at 1130, one of my floats juddered.... then a bob.... then it lay flat....stood up ... then bobbed again......a very, very gentle take indeed.I tightened up within seconds, felt  the weight of a good fish,played it deep for a few more seconds and Andy wielded the net for me with his usual skill.The whole thing was over in a minute.....and then the pike woke up!....but it was too late.
Thankfully, I'd just reacted in time, as the bottom treble was an inch or so from the stomach entrance and , although  easily removed with the 'long noses', goes to show that It pays to be 'on the ball' when it comes to bite detection .I've never yet had a deep hooked pike that i've not been able to successfully retrieve my gear from.....and I'd like to keep it that way.After the pic(looks better blown up) she went back with no trouble at all and probably sat sulking in the margins for a while before sliding back down to the depths.
13lb 12oz, fit and fat, and my first double of the season-let's hope there are a few more.
An hour or so later, Andy and me were making our way back to the truck already planning a return trip. 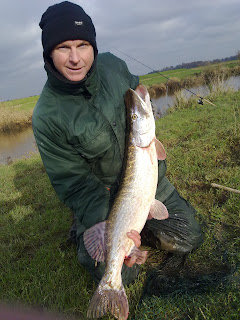