Andy and me were out again tonight,joined by Andy's mate Baz, grabbing another opportunity to chase spikeys.
We'd decided to try opposite the swimming pool to see how far these fish were spread along the L.A coastline.Compared to the turmoil we experienced last night, conditions tonight were far more manageable-in fact I'd go as far as to say that the surf was near perfect-for Sussex.Evenly breaking waves with nice flat tables of water separating them-standing in the surf it was easy to imagine that we were fishing a classic Cornish or Irish strand at times.
The tide was relatively small and most of the areas where we've been catching of late would not have been accessible.The southerly winds and low pressure had also contributed to restricting the tide range which we realised, but it still looked quite odd at low tide seeing so little of the beach exposed.
Fishing from LW up, the flood was well underway before we had any bites and the first of these came to Andy who , after a few finicky missed takes, landed one of 2 1/2 lb.I too was getting definite bites but was failing to follow through until a steady pull resulted in this one at 4lb(55cm).
We could have had half a dozen out between us had we connected with the bites, but we felt that they were probably just schoolies hitting our big squid baits. It'll be interesting to see how long this continues but, all the time this weather is kicking up a surf, it's gotta be worth having a go at them.
These past few trips out after bass have been immensely enjoyable.Just being out there in the wild surf is an experience itself but the run of luck i've had with the catches has just put the Icing on the cake.Once again I say to myself 'what a season' 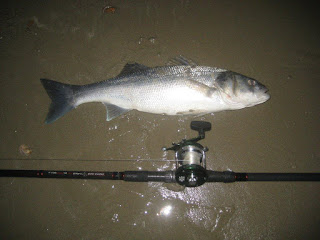