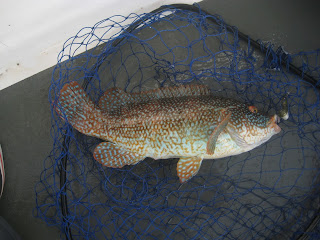 As a bass angler, I make a bloody good wrasse angler!
Whilst my boat angling mates, some of whom it has to be said are extremely proficient in the art of lure fishing , are literally 'avin it away', I'm yet again struggling to consistently catch our favourite 'spikey' fish.
Several good bass have recently fallen to their plastic imitations and it seems to me that I've still got a lot of learning and practicing to do before I can even approach their standards. Tony- a relative newcomer to the arena who has been fishing extremely proficiently of late, had the patience to persist on one mark today and scored a hat trick of very good bass towards the end of his session. Martin , one of the best bass anglers in our area, also succeeded in finding some good fish so the bass are about, which is reassuring .....
I will admit that I found today's fishing extremely frustrating . So much so, in fact, that I didn't really enjoy it.....and that, for me , Is a rare occurrence.
I searched and searched a series of reef marks that are known bass locations, yet all I could catch was wrasse, after wrasse , after wrasse.
I suppose the final tally must have approached thirty fish with some of a reasonable size approaching 4lb but, that's not the point. The target specie wasn't found and I went home disappointed.
Of course , I could have switched tactics and fished baits for other species as there are some very good plaice, and even decent autumn bream being caught by the charter fleet but, at the moment I'm concentrating on trying to improve my lure fishing.
Posted by Unknown at 01:54