'Jupiter's Moon' has an almost identical twin on the marina in the shape of Rusty's recently acquired 175 Export-'Untouchable'-the only other resident Warrior in Littlehampton.
The initial plan was to get together for a wrecking trip but, as Russ had tried it yesterday, and found it hard going, we decided instead to hit the banks 'down west' and try for the elusive turbot.
My experience of turbot fishing locally is that it takes endless patience. They are much sought after ,not exactly thick on the ground and my only success have been where I have continually drifted a mark all day long for a return of perhaps half a dozen fish to the boat- and that was a 'red letter' session.
Having sourced the mackerel , we tried  a small bank first, with little success, before moving to a much larger bank to anchor up for blonde ray-a favourite of mine.
It's an eye opener , at times how heavily we small boaters rely on our electronic 'trickery' to get us exactly where we want to be.
The particular bank we'd chosen to target is one I'm very familiar with on my own equipment , and have indeed taken some seriously good blondes from in the past. However, simply faced with a different chart plotter with  a different style of mapping- I was completely at a loss when trying to locate my favourite 'spot' .
In short, I didn't have a clue where we were and the boat could have been on the moon for all I knew, but we can't have been far off  because Russ's baits were hit by a couple of spotted ray and a small blonde.
Relocating once again to the 'smaller bank' I took a modest bass whilst messing about with the spinning rod and plastic,before we once again anchored up to try with static baits.
The going was slow, which  is often the way when fishing these banks but, at least we weren't plagued by cat sharks.
My first bite, when it finally came, was typically 'big ray'-very delicate,  but the initial stages of the fight were a complete contrast with, what was obviously a decent fish stealing line and diving strongly.
Its been over a year since I've had one and forgotten just how well they go.
Unfortunately after a while it became clear that the ray had 'tail wrapped' which completely killed the 'scrap' and it then became a 'war of attrition' winching the big fish slowly against the powerful tide flow.
I'll admit to being a bit nervous as I was geared for turbot with a 4/0 a 20lb trace but my biggest concern was that I'd tied the leader on with a, new to me, slim line leader knot which I'm testing for shark fishing,and wasn't confident as the strain on the gear was quite considerable.
I needn't have worried as it survived the battle( a good test for the knot) but, I was more than relieved to finally see the big ray slip over the rim of the net.
I've caught bigger specimens but, thanks to Russ, was exceptionally pleased to finally get a decent picture of me holding one instead of a 'deck shot'- a splendid fish of 24lb 4oz which made my day.
I'm sure if we'd given them more time we'd have caught one or two more but , in a similar fashion to turbot, these blondes aren't exactly everywhere, but are extremely rewarding when they do turn up.
So, despite the general lack of action ( I couldn't care less really) another really enjoyable day afloat and huge thanks to Russ for letting me sit in the 'passenger' seat. It's certainly a comfortable ride in those Warriors. 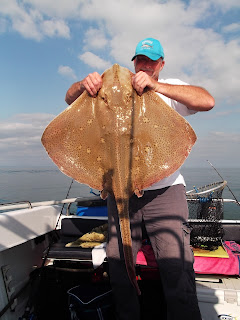 24lb 4oz
I know for sure that I'm not completely wasting my time and that there are a handful of you 'out there' reading all this drivel. I'd really appreciate hearing from you especially if you'd like to share your own experiences. Get in touch on here, or by email at completeangler@sky.com.
Jeff
Posted by Unknown at 02:13