Dave joined me for this one and with a 4.3m tide, which is comparatively tiny, a perfect scenario for  tope fishing. We caught twenty one tope between us mostly 'teen' fish  with the odd 'twenty  plusser' thrown in but, no monsters.
I did learn however from Neil (Spirit Of Arun) that some big tope over 60lb had been taken on previous trips by regular charter visitors and Neil himself had taken some good fish today also.
The diminutive size of the tide made a huge difference to the fishing and we rarely needed to exceed a pound of weight to keep the bait on the sea bed when fishing down tide.
I also wanted to experiment with some up tide fishing using 7oz casting weights with big fixed wires. This proved to be equally successful though I'm unsure as to whether it gives that much of an advantage over the more direct contact afforded when fishing down tide apart from being able to use a lighter weight rod, 20lb instead of 30.
A few days ago, following a recommendation from Mick (S-O-A),  I purchased an underwater camera that could be attached to end tackle and sent down to the sea bed. I managed to successfully film a tope taking the bait and several interesting facts appeared in the footage.
Firstly, I was very surprised by the quantity of 'debris' on the sea floor at this particular mark. It was literally littered with shells, both empty and occupied, and other life forms such as starfish.
Also, despite being 100ft in depth, It was obvious that the current was still having a measured effect moving the end gear around quite considerably, and water clarity was reasonable . The camera automatically adjusts  to light levels and on this particular occasion about 10ft from the lens was clearly visible.
As can be seen in the footage, the tope drops the bait shortly after picking it up and moving with it. I suspect that this translates to what is felt as a 'bite' at the surface but its also interesting to see the tope actually chasing the moving bait before finally being hooked.
Hopefully I will be able to film more different species in the future and it will certainly provide some fascinating footage. 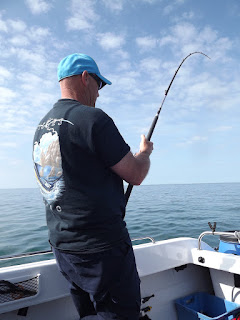 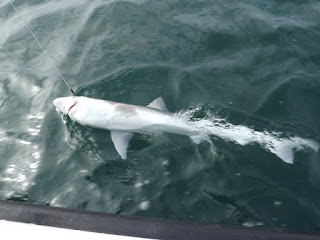