An invitation today from my good mate Brian Norman to join him on his Orkney Fastliner 19 'Marruig'
The (loose) plan for the trip was basically to experiment on a series of marks both with lures and bait.
First stop was on a reef #2 where our lures picked up a succession of ballan, and colourful cuckoo wrasse along with some black bream on 'herring' sabikis. 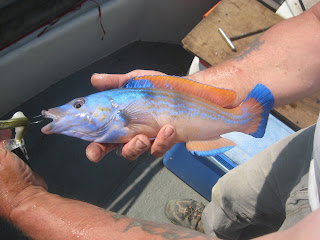 We seem to be finding some alternative methods of late for snagging these bream and its making for some entertaining fishing.
Next in line was to anchor up on a wreck # 15 and fish for conger with bait but, shortly after settling, the a pair charmless 'nerks' in a dive boat arrived and proceeded to 'bully' us  so ,we elected to move on.....to another wreck.
Being a bank holiday the channel was rather busy, at least it was where we were because much to our amusement (read frustration but, you've got  to laugh sometimes), another dive boat turned up on the 'new' wreck.
It was obvious that they were going to proceed with their dive and I suspect that they actually have little idea of how their actions would effect our fishing so in the end, we decided to give up the idea of wreck 'congering' and move somewhere a bit more peaceful.
To be fair, they had a little more manners than the characters we'd met on the previous wreck but it seems that there is no 'first come' rule at sea. We 'd also managed to accidentally cross a pot line (unmarked) with our anchor, but the commercial crew who were hauling their gear and discovered this didn't seem to think it was much of a problem and were indeed very friendly and helpful in sorting out the situation.
Actually the divers did us a favour because we ended exploring a mark neither of us had fished before #17 but one that I'd made a note of when first starting out in this boat fishing 'game'.
The small reef produced a succession of wrasse to our 'soft plastics' along with a couple of small  bass and I suspect that it will be well worth a revisit when the bass are more 'up for it'.
Finally a last point of call was to an old favourite mark #9 where, along with a handful of good wrasse, Brian 's lure was seized by this seven pound bass to finish the day on a 'high note'. 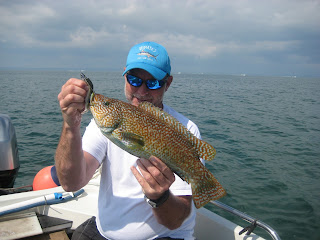 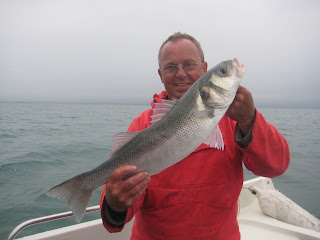