The reader may get the impression that I experience good fishing on every trip out in my boat but, of course, this just isn't the case. Whilst its indeed rare to completely blank there have been three occasions recently when very few fish have been caught.
Firstly, I took my wife out on a short afternoon trip primarily to teach her some vertical jigging with soft plastic lures over one of our local reefs but, as this only produced one small pouting, we decided to anchor up on some mixed ground. Alas just one small tope showed up on a mark that produced an endless supply this time last year.
Another target was mullet , anchoring the boat in the river on the ebb tide and trotting bread flake-the first time i've tried this from the Warrior. To cut a long story short we didn't even see a mullet let alone get a bite from one and it would appear that there are very few in the main river at the moment whereas the marina is absolutely  teeming with them.
A third trip, on a small tide suitable for tope, was with piking guru Jon Cook, his first trip on my boat. We tried my deep marks at the' Chair' and 'Owers ' for just three pack fish and plenty of  nuisance cat shark, not exactly a blistering result and again, not a patch on last year. Perhaps the general lack of mackerel locally is having an effect.
Finally on my most recent day time trip,my friend Alex was keen to get down on the banks to drift for turbot and brill . I'd been told that one of my favourite banks had been destroyed by the winter storms but upon investigation with the sounder this appeared to be far from the case and the bank, although a slightly different shape, has retained its most prominent features in particular a ridge that causes quite a surface rip as the tide runs.
Unfortunately the target species were not found and just one nice plaice of 2 1/2lb showed up on a ragworm bait-the only fish of the trip.
I had wanted to anchor the bank and fish for blondes which i feel would have produced, but my crew was keen to persist with drifting other neighbouring banks although this proved to be equally unproductive. 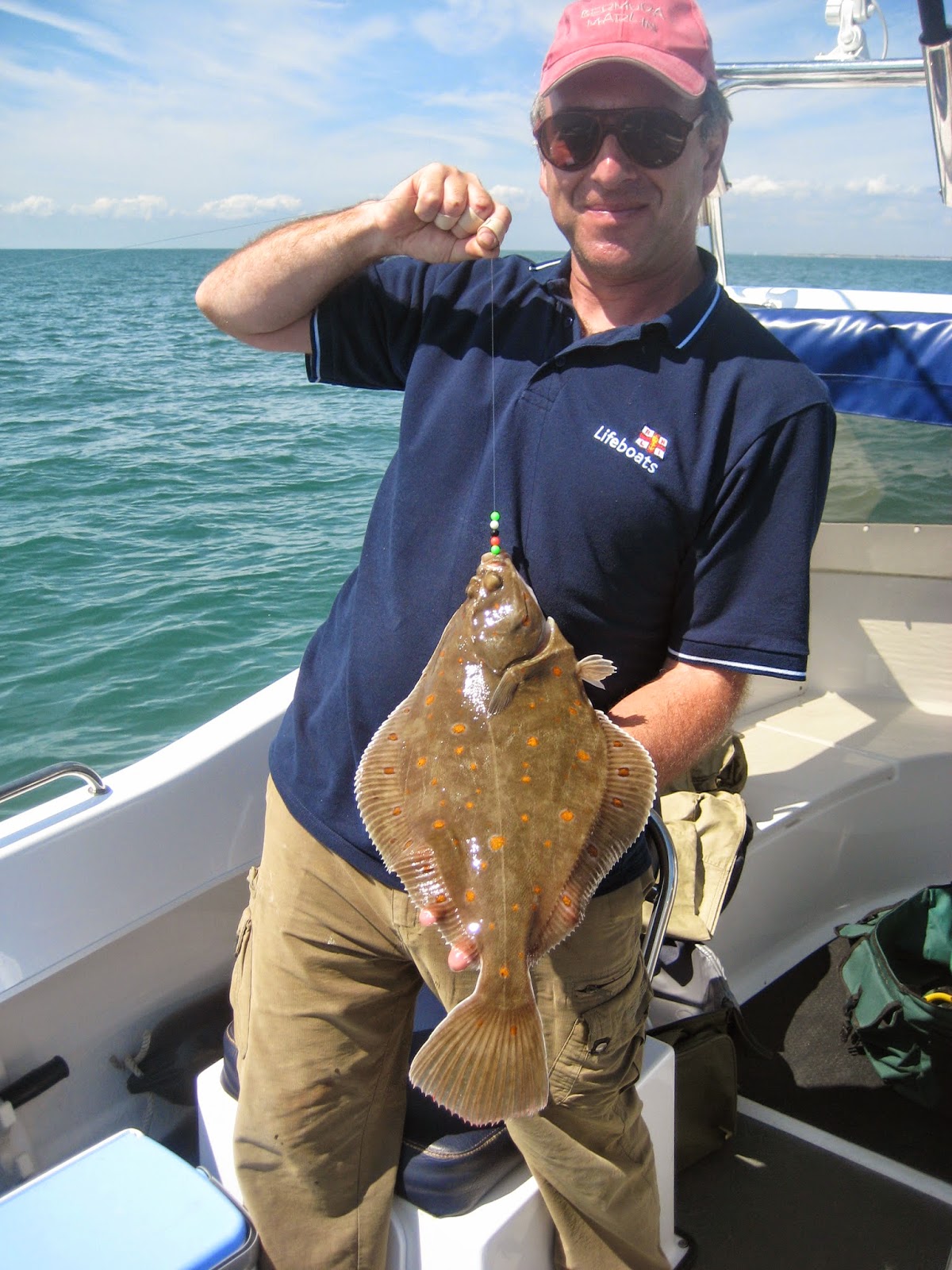 Feeling slightly perturbed by the lack of action, I decided the fish weren't going to get the better of me and a return trip was planned for that evening. Marina neighbour Brian agreed to join me at short notice for a ;three hour conger outing on my new mark. After a quick turnaround ,a bite to eat and a fresh tank of fuel collected it was back to the boat for an 8p.m start-the first time I've ever done two runs in a day.
Weather conditions and tide time (HW 8p.m at Littlehampton) were perfect for the mark allowing the maximum amount of fishing time in darkness on the ebbing tide.
With no wind and a steady flow the boat was accurately positioned on the first drop of the anchor leaving the main structure just 30yards from the stern. Half mackerel and cuttle baits were sent down and, as darkness fell the first 'slamming'  bite to my rod produced a small bass of all things. Nice to know there are some about on this mark and food for though for future runs. 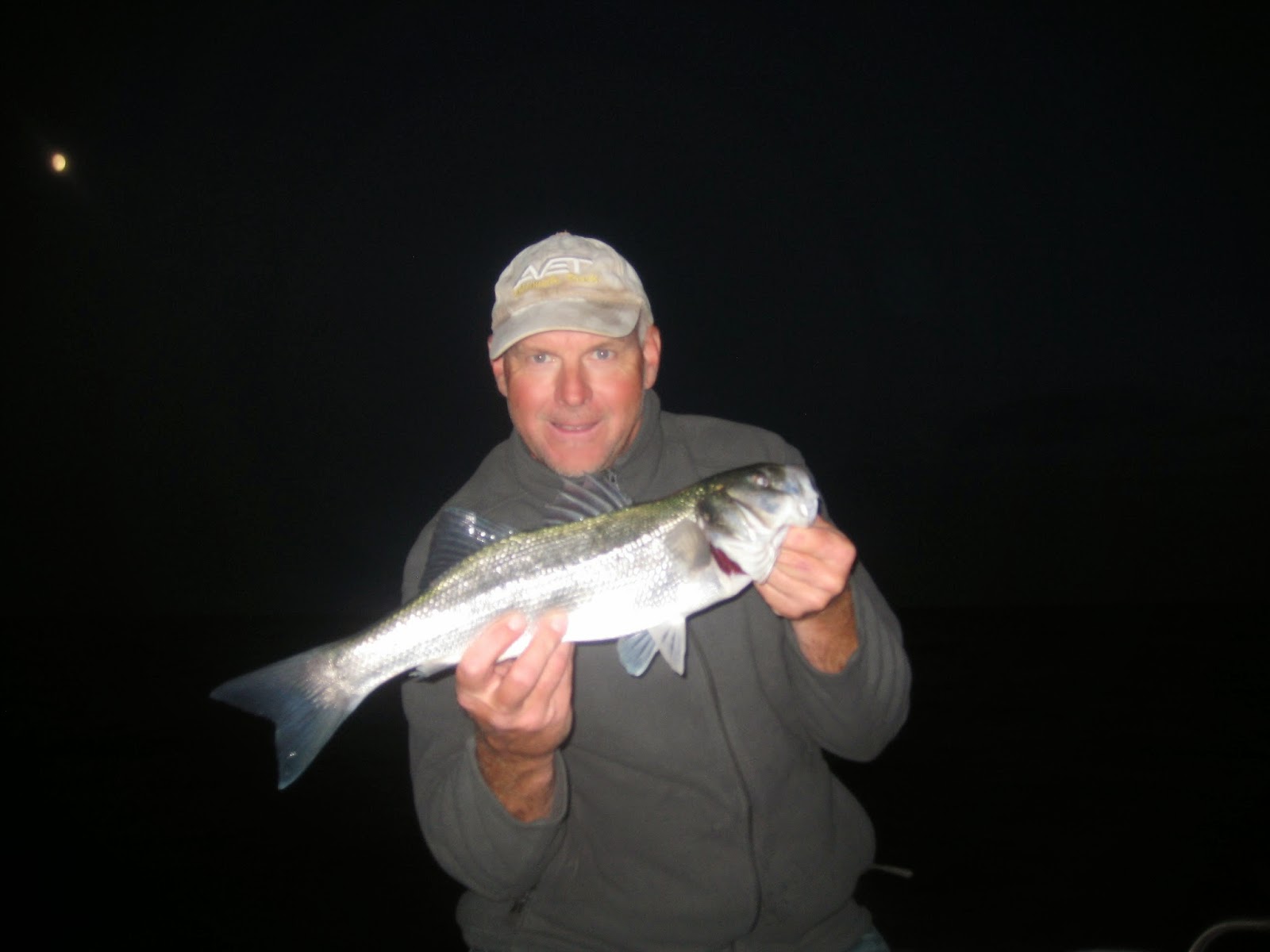 Shortly after and a far more delicate take, again to my half mackerel, produced something considerably bigger, and stronger- a good conger was 'on'. The fight was exciting with plenty of  line stealing dives but not too prolonged, my main concern being to get her well away from the snags as soon as possible.
Once on the surface it was clear that I'd scored another good 6-7ft eel and the decision was made to bring her on board for weighing. At 58lb she is indeed my personal best conger-a slimmer fish than Simon's of a few days ago but pleasing nonetheless.
Brian had been unlucky with a break off when his braid parted on something abrasive but eventually connected to his own eel to maintain an even keel and I was more than happy with this. Finally another undulate took my bait before the tide lost its pace just around midnight -time to 'call it' as we both had work in the morning.
So, another successful trip to the 'new' mark for eels and an end to a very long , but highly enjoyable day, and night on the water. 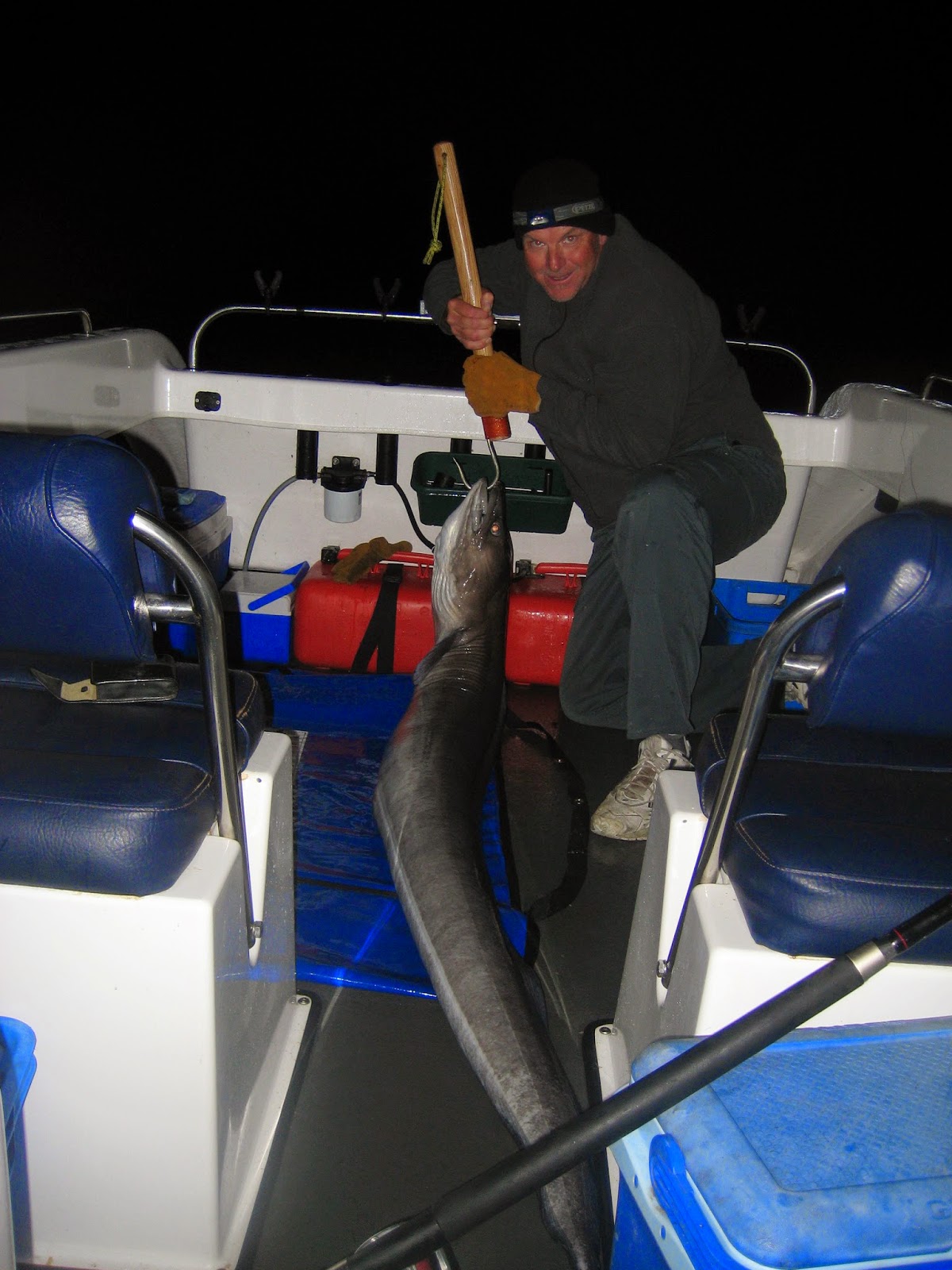 If you've enjoyed reading the blog,please take the time to leave a comment or join as,a follower. If you have any qusetions, i'd be more than happy to help.
Posted by Unknown at 08:31