I'm famous!! Its alright , there's no need to rush for your autograph books just yet. It's merely a mention(column) in the Angling Times about my zander capture and in typical journalistic fashion, they haven't quite got the facts right and have somewhat, sensationalised the event. According to them my lost second zander was 'an even bigger fish' and they added a decade to the elapsed time since I'd last visited the lake.
It looks like the sea angling monthlies have got hold of Brian's blonde too and I'm hoping that they get things right as its a far more significant capture.
It's finally stopped raining and the rivers are beginning to recover, recede into their banks and, according to the Environment Agency web site, are returning to 'normal' winter levels. I'm sure you can't have failed to notice the above.
There is however, still a huge amount of surrounding surface run off flowing into my favourite river, keeping the water coloured which is hardly conducive to good pike fishing. However, one of my piking buddies , Lionel Mills fired me up by catching a 'tidal' pike at the week-end, albeit on a different river and, curiosity got the better of me so, I had to take a look myself.
Naturally, I went armed with rods and bait and on crossing a conveniently placed road bridge on my journey to the chosen stretch, was pleasantly surprised. Yes it was running high and fast but definitely not the colour of chocolate. A fair estimate was to say that it was more akin to the colour of weak tea. Pretentious tea with a fancy name that is usually consumed from a bone china teacup complete with saucer springs to mind.
I decided to proceed.
On reaching my chosen swim(s) It was clearly (pun fully intended) 'worth a shot', I thought to myself and I actually felt cautiously optimistic that a pike might possibly find one of my smelly paternostered sardine baits. I'd certainly caught the odd pike before in similar conditions and anyway, the sun was shining, I was finally on the river, and just happy to be 'out there' fishing again.
My flood bank perch felt a bit like a causeway in a vast sea as all the surrounding fields were full of water gradually emptying into the river via ditches and sluice gates causing huge boils and heavily coloured flows downstream which I tactically avoided.
Keeping mobile, it was the second 'swim' that produced the only take of the day in the shape of this seven pounder. 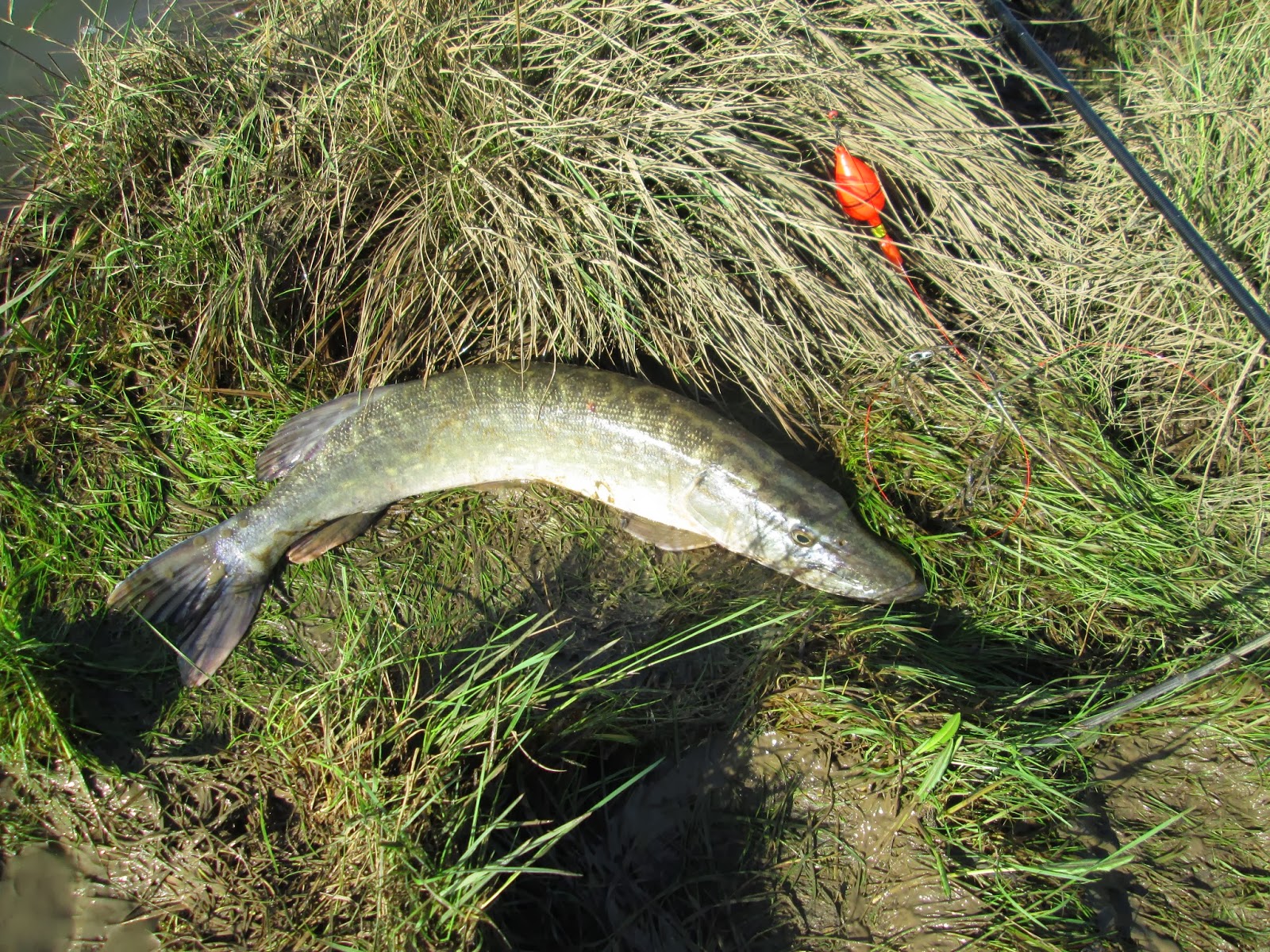 Only small but nonetheless , a welcome sight and enough to encourage me to persevere for a couple more hours and half a dozen moves before it was time to pack up and go to work.
Interestingly, despite the ebbing tide, the river level changed very little during the course of the session and although I didn't hang around long enough to find out, I doubt whether the flooding tide and subsequent change of  direction of flow, even occurred. There is still a lot of flood water trying desperately to reach the sea and unsurprisingly ,it's this that is maintaining the high water levels as it slowly filters back into the main river.
Despite this, unless we experience more heavy rainfall, conditions can only improve and, I don't think it'll be long before I'm back for another try. As for the non-tidal upper reaches, I think I might have to wait a little while for those areas to recover sufficiently for fishing to be worthwhile and, with just a couple of weeks of the season remaining, time is running out on what has been the most difficult of pike fishing winters. 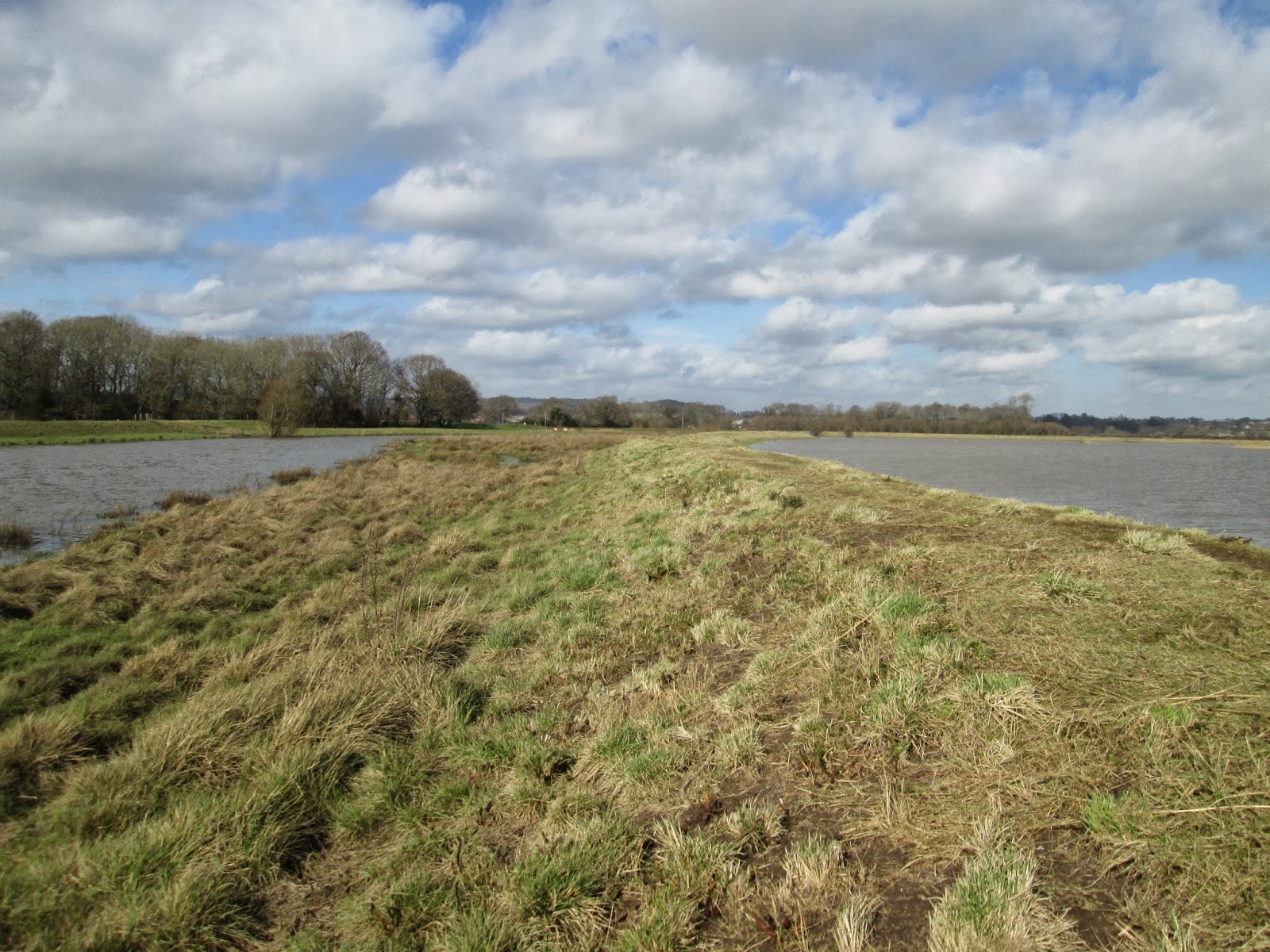