Eastborough bank was the chosen destination for today with the intention of plaice fishing in the smallish tide.On arrival, I had the whole mark to myself which was a different scene to my last visit however, I was soon joined by Lynander and Jennifer's Pride.
A good catch of plaice to about two pounds plus was steadily accumulated through the day but, big news from J.P was that his crew had taken three huge fish in the 6-7lb bracket. One of them took a whole squid which was used as a substitute bait when a crew member had ran out of ragworm.
Upon hearing this , I tried the bait myself, except that I just used the head of the squid.It did prodiuce a copuple more plaice, and they were of a better size so, food for thought for the future. 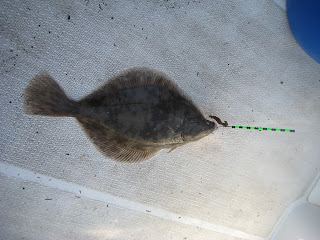 During the afternoon the winds increased considerably making things slightly uncomfortable. Steve on J.P commented on the radio that he'd like a bit more boat around him if he was me and I tend to agree.Despite  the conditions(a couple of waves did manage to reach the deck) and the painfully slow run home ,at no time did I feel unsafe in my little Orkney, but it felt good to make contact with dry land.