Primarily a trip targetting cod but, as it turned out, once again i had decent sport with the bream which seem to  reappear on our reef systems at this time of year. The sizes may not be a large as the spring fish but, the majority of bream i caught today, along with a few dogs, were of a reasonable size.Chosen location was 'the edge' and not far away from the usual charters who seemed to be hugging the reef proper. One cod did come up but in general, our results were similar.
Jennifer's Pride was located further west, fishing for plaice on the Eastborough Bank and with little success.It would appear that the door has closed on the plaice fishing for this year.
During the afternoon the visibility deteriorated to the point where i could only see 20to 30yds.Neil on Spirit kindly offered me an escort home if i could wait but i declined having to get back for work.
The return journey was VERY slow going and I had to stand and peer over the top of the cuddy to be able to see at all, as the windows were constantly obscured by moisture. 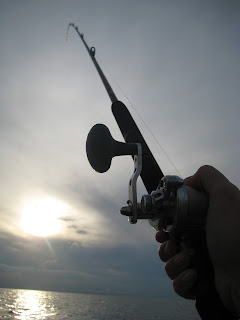 Without a radar reflector, Neil reported that I was very difficult to see, so this is something I need to consider for the new boat.
The new Suveran rods are proving to be superb in every way.Light, sensitive with a beautiful playing action, I cannot really fault them.They're a fine match with the Avet reels which a year on, and after some heavy use, and with little maintenance apart from a rinse under the tap after every trip,are still as good as new.
Posted by Unknown at 11:25