Alan's a very good friend and neighbouring boat owner at the marina and has a wealth of experience with our local boat fishing.I've learnt an awful lot by talking fishing with him and we often stumble across each other 'out there' and regularly share marks.
My last 'blindin' bass session saw Alan only a few yards away where he fared less well losing a double figured bass at the net.
Today the tables were turned somewhat and it was definitely Alan's day-in fact, it was his best ever day's bass catch in decades of fishing and I'm pleased to say that i was there to witness it from about thirty yards distant.
I'd started the day at stupid o'clock with the intention of lure fishing on the shallow reefs off of Bognor. In short-it was hellishly difficult going and I couldn't find the bass.Three hits on surface lures with only one small bass landed and even a local bass maestro had to venture further afield to find some fish.
Approaching mid day, i'd had enough of chucking plastic although it was very interesting seeing the inshore reef gradually appear as the tide retreated even if i did feel a little nervous of bumping my precious hull on the gnarly rocks.
I relocated to 'tbm' where Alan, the only boat, was already anchored up. He reported missing a couple of bass takes and has also said how difficult it had been to locate the mackerel bait which didn't bode well.
I had to work hard searching for my bait, but eventually had a dozen for the session and had also brought up a very pretty gurnard on the bottom 'feather'.
By the time I'd returned to Alan an hour or so later, he'd had his first bass on board of about 8lb and it wasn't long before, having anchored slightly south of the mark, I had a couple of average sized fish myself.
Unfortunately my only good sized bass of the day once again, failed to stay attached though ,made it's presence and size felt by some hefty thumps before letting go.I had suspected my 'circles' were at fault but both Alan, and Ted lose just as many as I do and as I like to return nearly all my bass (much to the consternation of some) I'm sticking with the circles and their 'lip hooking' ability.I'd certainly rather lose a few than have to kill deep hooked fish.
Whilst all this was going on Alan managed to build up his catch of four bass-an 11 pounder and three around the 8lb mark.The 'eleven' was his first ever double making catch even more significant and at least three of the fish fell to a cuttle bait.Back at the pontoon, I was delighted to be able to take a few shots  and see the look of satisfaction on his face even after all these years of fishing-well done mate 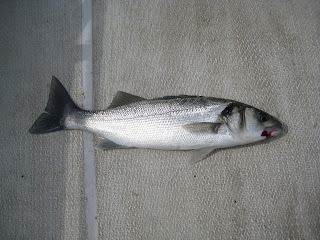 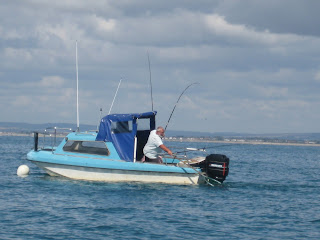 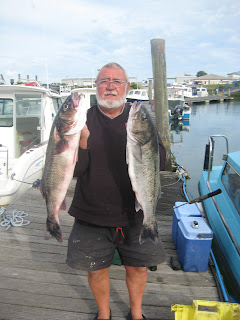