Because mullet lie at the root of all my fishing , and you could argue, my choice of lifestyle,they hold a special place in my heart.I don't suppose I'll ever tire of fishing for them although nowadays with my interests in other fields of angling, I choose to target them less and less.
It's almost July , and this is only my second crack at them.
I employed my usual short session , low tide, spot the fish tactics along the west bank and having located a small shoal to have a go at,the first bite was actually on the second trot down in the decreasing flow, and the first fish of the year only a few minutes later in the shape of this plucky fighting 2 1/2 pounder!The fight dispersed the remaining shoal members so I relocated to one of my favourite 'point' swims as the tide began to slacken off.
Bites weren't exactly plentiful, but i soon managed to connect with a second slightly smaller fish which unfortunately let go after about ten seconds and as the tide began its push proper, the fish disappeared and the bites tailed off to nothing. I'd been fishing for less than two hours. 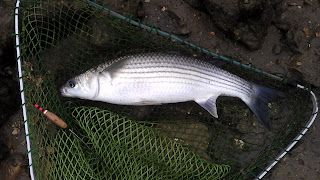