I headed out to the Kingmere reef at 1000 with the intention of trying for bass on live bait and was surprised that, despite the light wind conditions,and a window of opportunity in the weather,very few boats were about on the popular mark.
'Spirit' and 'Lynander' were fishing the Eastern end and were reporting some very good sized bream over the 'wireless'. Alan on 'Walrus' was in the general area I'd chosen to target and was also anchored up after bream. The 6.1m tide was just beginning to lose its strength as I sent down a line of feathers which, on clearing the Northern edge of the reef produced three really nice mackerel-a welcome return. Unfortunately, i hadn't previously set up the bait tank and only two survived in a bucket whilst i was doing so but, after wasting more time setting up the float rig, one was sent down on an 8/0 circle, whilst I jigged a 'norden' with the second rod.
One the second or third run through the float  disappeared , and the ratchet screamed signalling a really good take and even though I thought i'd left it long enough, when I tightened up, there was no extra resistance-bugger! It was a big mackerel bait and obviously I hadn't allowed enough time for it to be taken properly so I missed my chance.
The tide soon fell away to nothing and feeling slightly deflated, I decided to move closer to the eastern end relax,(I was feeling knackered after a particularly hectic night shift anyway)and drop the pick for some bream. By the time I'd settled into position, the ebb had begun it's work and the takes started from the first drop. Good fish too. I probably had about a dozen plus with the best a female of 3lb before things started to slow a little leaving room for a bass of a couple of pounds to step in and take the squid bait. This gave me the ideal opportunity to test out my latest toy(tool) 'The Fish Grip' from the U.S.A.
The tool, a cheaper all plastic version of a 'boga grip', is an alternative to a net as a landing/boating device, but can also be used to temporarily keep a fish whilst still in the water.
The grip, which floats, is tethered to the boat's handrail by some strong elastic cord and, once the jaws were locked on to the bass' lower lip, she was returned to the sea whilst I set up the self take.It seemed to work very well with the fish showing no signs of being harmed by the operation swimming away strongly once the jaws had been released.Hopefully, I'll be thethering some bigger relatives in the future.
I'd also sent down a mackerel head on a second rod whilst at anchor but it just succeeded in being nibbled away by the bream.
With the tide now 'belting' through at a pace making it tricky to hold bottom, I decided to up anchor and drift with a white 'Norden' ,criss crossing the reef. A pollack of about 2lb hit the lure and eventually a second bass about the same size also turned up but the fishing was quite slow so, for the last hour before having to leave to cross the bar, I anchored back over on the west side and ended the day with a handful of more good bream.The small and very dark male in the picture is also shown with one of the new floating beads which i'm using to good effect.
I'm probably going to upset a few 'spikey' fans by saying this but, those little reef pollack fight much harder than bass of the same size, especially on a lighter outfit.
By 1700 I was heading for home and despite being out fishing for nearly seven hours, the time had flown by, probably because of the mixture of methods i was using.I still feel I've a way to go with the live bait technique for bass and indeed , drifting in general. It would help to be a little better organised and I'm sure that'll come with practice.
Back at the mooring and neighbour Alan reported similar sport on the bream and also offered some bass advice ,citing marks #7 and #9 to try a little later in the season-duly noted. He still felt it was a little early for the best bass fishing.


No monsters today I'm afraid, although a 3lb bream isn't a bad fish I suppose.Looks like it's going to be windy for a few days now so no more boating for me for a while which is a bit of a shame as these big tides usually throw up a big bass or two. 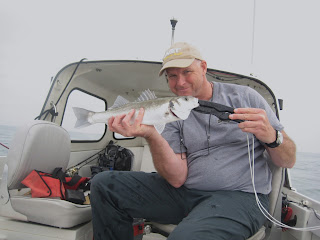 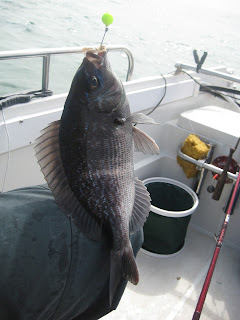