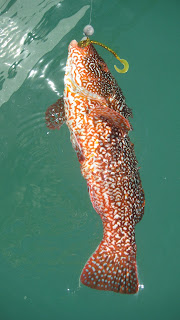 If October was a rather lacklustre month's fishing then in comparison, November positively sparkled.
Clive invited me out on his Orkney at the beginning of the month for a long distance trip 'out East' after turbot, but the day proved to be extremely hard going with the only example of the target specie falling to my host, although it was useful for future forays to discover when the turbot disappear for the winter.
A few days later , on the 6th, I headed out in my own boat to specifically target wrasse on soft plastic lures and scored 18  fish to 4lb 12oz ( and a solitary bass) in a fine afternoon's sport.
Usually, Fiiish minnow lures do the business with these toothsome critters but, on this occasion ,partly because they tend to trash these expensive lures very quickly, I elected to fish with imitation worms , texas rigged, and weighted with a simple ( and cheap ) drilled bullet of a suitable size sliding on the mainline. The method worked a treat and despite trashing just as many lures, the wrasse did far less damage to my wallet . 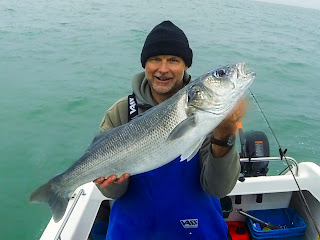 13lb 12oz
Three days later and I was back out in my boat but this time, the target was definitely going to be bass as a few reports of decent fish finally turning up on our local marks had been circulating on the grapevine and, the rod and line commercials had also recently arrived on the scene- and they're not there for fun.
My bass fishing since the spring has been lean by all accounts so I was eager to make amends and bag a few lunkers when the opportunity arose.
The day started with a visit to an inshore wreck to stock up the bait tank and this was successfully achieved with a handful of quite sizable examples of pouting and bream to around a pound before the fishing in earnest began.
I chose a deserted area of reef to drift and quickly bagged a couple of tidy fish in the 6-7lb bracket before a pair of commercial bassing Warrior 175s arrived on the mark and I elected to leave them to carry out their work in peace. I've absolutely no problem with these guys and their 'sustainable' methods and, they've always been very friendly towards me but it can be very frustrating to see them operate at close proximity because they're so damned efficient at killing bass!
My second choice location already had a couple of boats present , both working lures on the drift but, as they were mates (Neil on 'Spirit' and Martin on 'Blueprint') and neither were on the exact  line I wanted to follow , I decided that my presence wouldn't affect them, and so I set up my drift.
Within a minute of starting my first run through my black bream bait was 'snaffled', the float buried deep and a good fish was 'on'. The fight, it has to be said , was less than spectacular although I could feel that it was a heavy fish and, when it broke the surface ,I knew immediately that it was going to be a new personal best.
Neil had watched the action take place and was eagerly calling me up on the radio to get a weight and, after successfully releasing my prize,I was  happy to report that it was indeed a new p.b breaking my existing record (caught last December) by six ounces, and weighing in at 13lb 12oz. 5lb 2oz ballan
By then the ebbing tide was losing much  of its momentum so I decided to relocate again, and switch my attention over to wrasse on lures and finished the day with several fish up to  5lb 2oz -certainly a trip to remember.﻿ 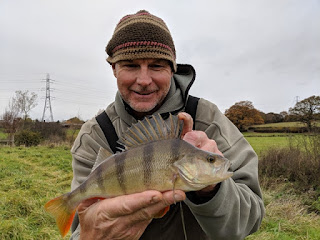 Mini predator.
My step son Matt had suggested that we have a crack at some perch on a tiny local river that we both had club memberships for and, as I was keen to try something different, especially as it had the novel attraction of fishing from 'terra firma' for a change, we decided to give it a go on the 14th.
Travelling ultra light and fishing tiny rudd baits under a loafer style float saw me catch a couple of perch to a pound, and Matt bag a jack pike along with a plump chub of about 3 pounds plus on his last cast of the session.
In the past Matt's had some tidy perch from this venue and as I enjoyed the session immensely, it'll be something I will definitely be returning to in the future when its too windy to go out to sea.
Speaking of which two days later and I was back out on the 'briny' solo again, and with those big bass on my mind.
The weather conditions weren't exactly perfect and indeed at one point on the way out I did consider turning back for home however, it was set to improve later in the day and invariably when conditions are 'marginal' like this, there is usually far less boat activity out there leaving a greater choice of marks to target.
Once again I chose to live bait and selected an inshore wreck for the bait gathering process but as I approached the mark I noticed another boat in position. Luckily it was Clive and Kim and ,after confirming that they didn't mind me sharing their bait 'larder',  I gathered half a dozen or so 'huge' pouting for the tank, before moving off to the bass mark.
The area was completely deserted with not another boat anywhere to be seen and my confidence built as I always seem to do much better when bassing if I'm on my own(last week's p.b excepted of course)
The baits were so big that I employed a 9/0 circle on the rig and even then, it looked a bit ridiculous against the pouting, but I've no problem using outsized baits and I failed to catch any 'tiddlers' anyway.
The first drift through, as the tide picked up pace, produced an immediate take and a 'fish on' albeit for just a few seconds before it let go. As I reeled the pout to the surface however, three big bass followed it right up to the boat before melting away so, they were certainly about.
The same pout was sent down for the second drift and this time, it was 'nailed' properly and a another heavy fish could be felt. In direct contrast to the fight of the previous week's fish, this one knew how to pull.....and pull it did.
My live bait weapon of choice is a gorgeous lithe like 12lb class Abu Suveran , a favoured black bream and plaice stick, matched with a 6501 Abu multiplier and the fish pulled a lovely curve in the rod and properly stole line from the reel with three powerful dives. In fact, I questioned at one time whether the fish was actually a bass as the fight was so strong.
When it hit the surface I was stunned...It looked absolutely huge ......far, far bigger than my previous weeks' fish but it was then that things started to get a bit tricky. The fish seemed to stiffen and wouldn't go into the landing despite several attempts...it was simply too long. Eventually I managed to scoop the fish into the mesh head first but when I tried to lift it one handed-struggled a bit with the weight......this was a biggun.
When I got her inside the cockpit the true size of the fish revealed itself and I was looking a something about a yard long. The rocking boat did not make the weighing easy but I was keen to get as accurate a weight as possible and when the 'Avons' centred I couldn't believe my eyes so checked the weight again on a second set of scales- Salters.
I settled on a minimum weight of 17lb 2oz and this is what I'm sticking to as I'm certain of this weight having since checked both sets for accuracy.
My only regret was not measuring her length accurately although I did make a rough mark on the landing net handle at the time and that's where the 'yard' estimate comes from. I was desperate to see the fish go back properly so after taking a risk on a couple of shots with the Go-pro tried to get her to recover.
I use a  'fish grip' device (rather like a pair of plastic mole grips) to tether my bass to the boat  and in this instance, this excellent tool proved invaluable. It took , what seemed like, an awful long time for the fish to recover and at one point, I thought that I was going to lose her , but eventually I could feel that her strength was returning so I released the tool and she dived into the depths, kicking strongly with an obvious sense of purpose - a sight for sore eyes indeed. I was one happy bunny indeed. 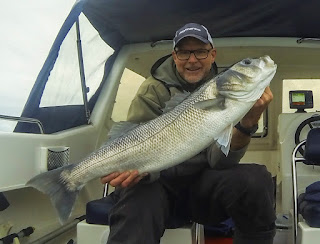 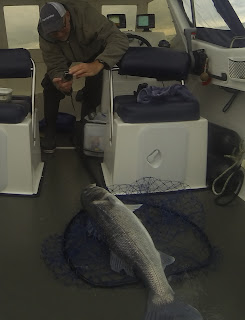 But the day was far from over and the live baits produced a few more missed takes , probably from bass too small to get the bait into their mouths, before a 6lb fish was successfully boated and my bait supply  ran out. I continued to fish the remainder of the tide with lures and bagged half a dozen smaller fish before having to decide whether or not to head for home, or stay out over the low tide 'lock out', wait for the tide to flood, and head back in darkness.
I opted for the latter and set about getting a few more live baits for the tank over the 'slack ' and returned to the mark just as the flood tide was beginning.
Once again the big pout bait was taken quite quickly and by another reasonable fish.  At 10lb 4oz it seemed tiny compared to the previous 'monster',- a ridiculous state of affairs because of course, It's  still a fantastic bass by anyone's standards.
After that things went very quiet on the mark with just a few smaller bass, and wrasse falling to the lure rod but no more takes on the live baits-not that I was worried.
Finally, back at the marina in the dark I was pleased to see that just Clive and brother Kim were still present on the moorings, and there really aren't two more suitable people that I could have shared my story with that evening. 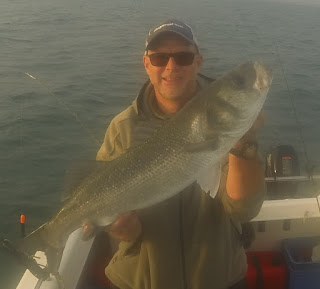 10lb 4oz
﻿
It was over a week before I managed to get out to sea again because of  a combination of rough weather and work commitments, and this time , a different approach, and target, was selected as the water had coloured up considerably.
I ventured out deep trying for a cod but instead caught four bull huss (my first of the specie from Sussex waters) to 12lb 4oz (another p.b) in a highly enjoyable session at anchor. I did briefly try a spot of bassing but it proved to be completely unproductive. 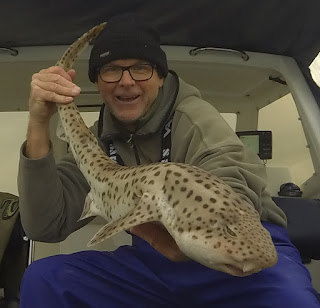 12lb 4oz Bull Huss
Towards the end of the month pike were back on my mind especially as I'd yet to have any notable action up to that point.
A trip on the 27th produced just one small fish on a very slow day before on the 29th, In less than favourable conditions- bright day with a biting North Westerly wind I ventured out again.
This time things were a little different and a favourite bend produced two fish in quick succession- a 12lb and a fine 17lb12oz pike at the top of the tide.
A move to another swim produced a '9' and a '6' before a final move to a sunken tree produced my third double of the day at 16lb.
Obviously the pike didn't worry too much about the weather conditions on this occasion! 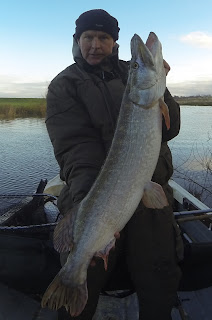 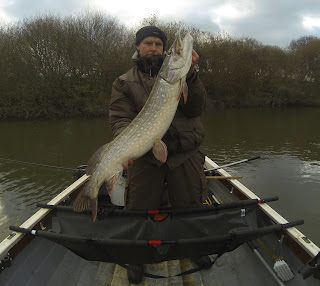