Why do I seem to have less time on my hands now I'm retired. How on earth does that work.Of course this is a perceived situation and far from reality but,  is indeed how it feels.
I always have jobs in hand( the hallway still needs decorating) and never seem to catch up with anything, although it has to be said that perhaps this is a good place to be as boredom doesn't exist in my world and for that, I consider myself very lucky.
With time management very much on the agenda, I've decided to change the way I write the blog with a monthly summary of events, instead of the individual entries of the past. I seem to have enough on my plate writing material for 'Saltwater Boat Angling' so hopefully, if I'm able to keep an accurate hand written diary, this new direction should prove more efficient.
A couple of  trips early in the month involved taking complete beginners out in the boat-a neighbour, followed by my daughter Grace and her fellah Curt. The mackerel fishing proved to be immense fun with plenty taken both for the smoker, and the shark bait stock, but unfortunately a spot of bottom fishing at the end of each session proved less productive ,although they all seemed to enjoy the experience especially as they were able to eat their catch. 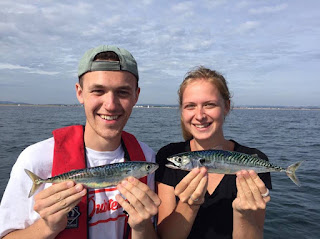 Grace and Curt
This was followed by a short afternoon trip to the river in search of my current favourite freshwater quarry- pound plus roach.My bread feeder tactics scored yet again with this one that just scraped past the target weight- not a monster but a good fish for the venue where a two pounder would be a fish of a lifetime in my book .
Oddly, I can only seem to extract one sizable roach from the swim in each session although there are usually a few lesser fish about. Perhaps these bigger roach are solitary creatures...who knows. 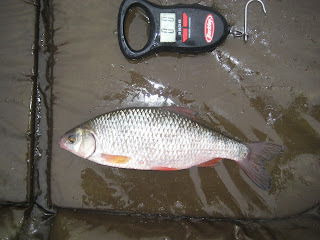 Sam Wadman called me up a few days later ,asking if I'd like to make up a Turbot charter running out of Brighton and I jumped at the chance to both catch up with my mate, and hopefully sample some fishing that is just a little too far out of reach for my own boat.
'Proteus' is skippered by Steve Green, a top bloke who ,unknown to me at the time, Is also a former colleague from London Fire Brigade, so we had plenty to talk about.
The fishing was hard, with about a dozen turbot to the boat during the day, but I was pleased to get a new P.B of 6lb 7oz plus a rather nice tub gurnard, and it made a pleasant change mixing with a group of other anglers.
﻿ 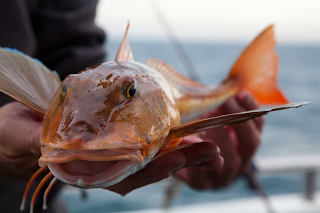 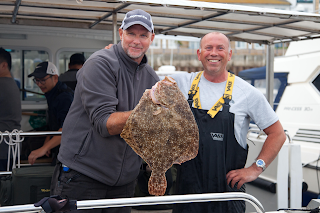 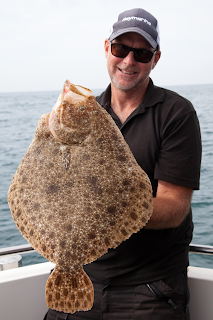 New P.B Turbo
The following day I had something of a 'eureka' moment when studying  'Windguru' -my on-line wind forecast site of choice. A  settled period of weather had presented itself for the proceeding days, and this meant a very real chance, for the first this year, of getting the boat down to Cornwall for a blue shark trip.
A quick call to Clive confirmed that he'd be able to join me, and the  the boat was quickly hauled out ,and preparations were made. A day later, with camp site sorted, we were travelling down to deepest Cornwall with the prospect of at least seventy two hours of low wind speeds ahead. 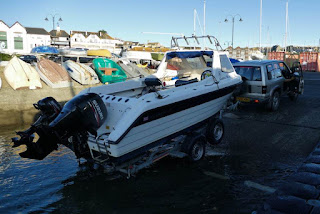 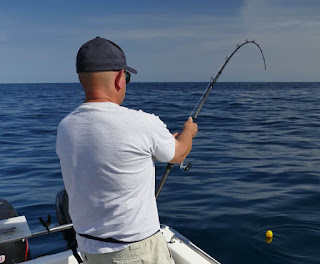 Clive's off.
Proceedings started in hectic fashion with more than enough mackerel from a favourite inshore rock mark about to stock up the bait box and, in fact, so many that i really needn't have taken any pre -prepared chum from home- something I'd not seen before.﻿
I decided that the best policy was to head out to very deep water, almost 300ft,and  began the drift some twenty miles offshore starting at a mark where I'd finished my last drift the previous year. This  pattern continued on the following days, beginning each drift at the finish point of the previous day's, resulting in the boat covering some fifteen miles of ground in total.
Almost as soon as we'd arrived,  before the chum bucket had even touched the water, there were shark showing in the area with one spotted nearby on the surface, and before the second bait was sent out, that Clive's float disappeared and a shark was 'on'.
Sport was continuous and hectic with 17 shark to the boat for the day (a new record), most of them a very good size with  the odd 'ton plus' candidate. We rarely managed to get more than two rods out at a time, and mostly just had one bait set, taking in turns to catch the shark. Incredible fishing.﻿ 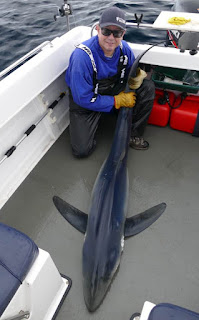 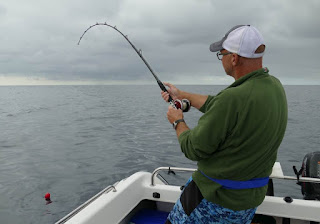 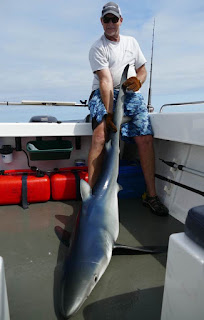 On that first day, whilst still feeling quite fresh, I decided to bring one each on board to get some pictures, something I knew Clive was keen to carry out, and we chose a couple of mid range fish (about 70lb) for the purpose. This was achieved without any problems and all the remaining fish were released at the side of the boat. 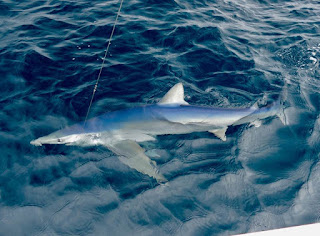 The second and third days followed the same pattern, with sport generally being just as productive,  the total number of shark caught reaching 45 by the end of the trip,with several 100lb fish (estimated but possibly larger)in the mix.
On several occasions were treated to the spectacular sight of  big shark circling the boat often in groups of three or more and sometimes attacking the chum bucket, nibbling the prop , or showing a keen interest in hooked fish. We were able to drop baits directly to them, trying to pick out the better specimens in the process, and I was also able ,for the first time, to successfully film a shark actually taking a bait.
﻿ 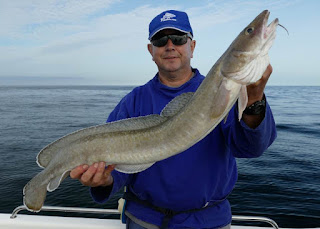 Wreck ling.
Whilst returning to port on day two I made a short detour to a wreck that I'd been previously aware of and Clive sent down some baited giant Hockeye lures. When a ling came up, I had to have a go myself, as I'd yet to add one to my own species list, and two more were boated to about 10lb- a first for me and an addition to Clive's specie list for 2017. 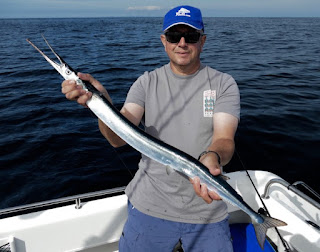 In the limited time we had between shark takes, Clive also managed to top up the list with  haddock and grey gurnard on bottom baited feathers,  sardine on a mackerel rig, and this stunning garfish of 2lb 7oz ( a new P.B) caught on a tiny mackerel fillet float fished in the chum slick.
I'd seen, and caught big garfish in a similar way in past Cornish shark runs so was pleased to see their return, for Clive's sake, on this excursion.﻿ 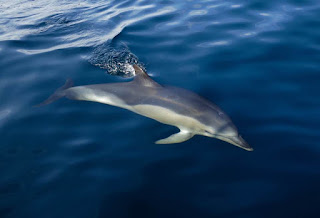 Common dolphin
We were continually blessed with visits from common dolphin pods,  and also the incredible sight of a huge minke whale which swam right under the boat giving us a terrific view but, highlight of the trip  was witnessing a massive eruption, in the otherwise flat calm sea caused by a tuna 'bust'. Truly huge fish , well into several hundreds of pounds, probably feeding on sardine shoals.
We did try a short spell of trolling some lures in a vain attempt at a hook up but, probably for the best, being less than adequately equipped to deal with such quarry, we didn't make contact although this is something I need to look into for future trips.
One has recently been successfully boated and released by Welsh shark specialist Andy Allsop of Whitewater charters-a fish that amazingly took a shark bait in the spread and was boated on equipment not too dissimilar to my own 'blue' gear.
My fifth consecutive year fishing for Cornish blues and ,without doubt ,my most successful shark trip to date and hugely rewarding in the process.﻿