I'd been watching the sea state at the back of my house for most of the morning deliberating over whether or not to venture out when a call came through from Martin saying he'd pick me up in fifteen minutes at the visitors pontoon.
He and his Dad- Brian had been out that morning and, although it had cut up a bit rough, they had caught bass and, as the fishing had slowed over the slack high water , they didn't mind coming in to pick me up- I've got some priceless mates haven't I. Grabbing a lure rod I was ready and waiting in ten minutes flat.
The sea actually calmed down considerably during the afternoon and, as there were literally no other boats about, we had the mark to ourselves and enjoyed some terrific sport with the spikey ones soon losing count of numbers.
Nothing big, I suppose the best fish was about six pounds, but we caught consistently until the tide lost its momentum late in the afternoon. Superb. 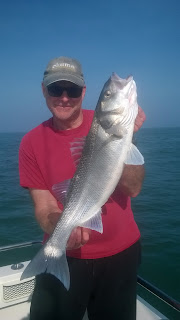 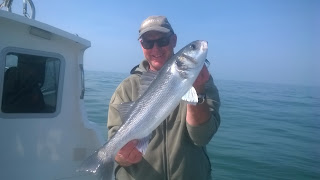