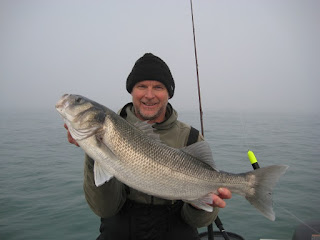 13lb 6oz ....a new personal best
'Jupiter' had spent most of December on dry land partly because It needed a couple of small jobs doing such as scrubbing the weed off of her bottom, but mostly, |If I'm completely honest, because I'd slightly lost my boat fishing 'mojo'.- a somewhat ridiculous scenario.
What I really needed was for someone to slap me round the face with a wet pouting!
In the event, that wasn't required and just after Christmas I came to my senses and dropped her back on the mooring, keen to get out to sea and fish again.
Usually, at this time of year, my thoughts turn to settling down at anchor with big cuttle baits in an attempt to catch a cod or two. Whilst my colleagues in the Eastern solent seem to be picking up a few 'greenbacks' , on our side of Selsey Bill they seem to be conspicuous by their absence.
The water is still very warm (52deg when last measured) and the clarity is excellent. What's more, the commercial rod and line bass fishermen are still out there doing their thing so, despite being very late in the year there really was only one target specie.
Brian joined for the trip and the plan was to fish live baits backed up with some lure fishing on a specific mark that had served me very well when the bass season started back in March.
Initially we dropped anchor on some clean ground in the hope of picking up some whiting for the bait tank but, as this proved completely fruitless, the decision was quickly made to visit an inshore wreck.
Pouting, mostly of quite a respectable size, soon filled the tank and we arrived at the chosen drift mark just as the tide had begun its ebb cycle. We also caught a couple of nice bream on the baited feathers - an unusual sight indeed.
There were a few boats in the vicinity but, visibility was poor due to  thick fog and anyway, we all appeared to be running slightly different drift lines.
My plotter is marked with waypoints that signify the spring bass catches and in particular, those of a good size and I used these as my guide. With zero wind speeds I was able to continually put the boat on the same drift line easily and this proved to be a distinct advantage.
Barely minutes into the first run through, my float took a dive resulting in an 8 1/2 pound bass and, from then on, it was virtually a take on every drift resulting in the following statistics;
Bass of 6lb 8oz, 10lb 6oz, 10lb 4oz,10lb 10oz,7lb 4oz...two fish in the 5-6lb class and finally a new personal best of 13lb 6oz.
Several dropped takes were also experienced, which I suspect were from smaller bass unable to properly take the out sized baits we were using. On a couple of occasions, flowing the aborted hit, we left the baits in place resulting in a successful hook up-usually one of the bigger bass.
Whilst all this action was taking place, my poor crew mate( a dab hand with the camera it has to be said) was having something of a nightmare due to a combination of tackle malfunctions and bad luck although, he did eventually manage to secure a couple of nice fish in the 5-6lb class to save his day. I'm pleased to say he returned the following day in his own boat and picked up half a dozen good fish.
Eventually, although we were the last boat fishing in the general area, I called a halt to proceedings as we'd run out of live baits, and the visibilty was down to a few yards resulting in a very slow and cautious run home which I'm happy to say we achieved without incident.
This has to be one of the very best sessions I've ever had afloat.-a rare day when almost everything went exactly as planned  producing some superb fishing which I'm unlikely to see again for quite some time. 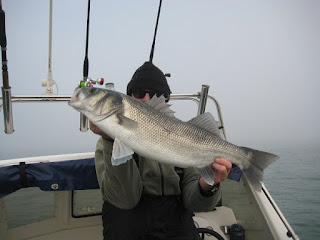 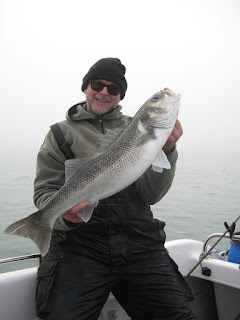 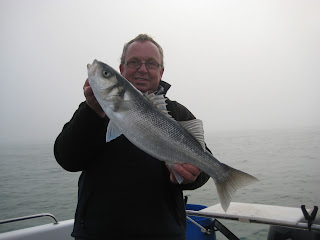