We've experienced a prolonged spell of wet weather with some very heavy rainfall for several weeks now ,rendering the river virtually unfishable for pike, and forcing me to visit the club lakes in search of perch.
Unfortunately, this has proved almost completely unproductive as , after three sessions, all I've managed to catch is one small roach-less than ideal.
Regular visits to check, and pump out, the river boat have meant that I've been able to keep a close watch on the state of the river but Its also been very useful to monitor the E.A water level website and compare results.
On some occasions the tide has had very little effect on the river level-it's stayed high constantly, and continued to flow in one direction.....seawards.
Last week-end things were improving and, crossing the upper river to visit the club lake, levels looked almost back to normal but I decided to leave it a couple more days to fine down before venturing out in the boat again after pike.
The tides were small so it was convenient to head upstream to fish but first, with a heavy overnight frost and sub zero temperatures, I had to thaw out the boat lock...by boiling a kettle.
Once underway it was 'plain sailing' but still pretty damned cold, but the water looked to be in fairly reasonable shape with decent enough clarity.
My first and second 'stops' produced nothing whatsoever and I was beginning to wonder if the low temperatures had put the pike 'down' but, by late morning I'd reached my third swim of choice and sure enough, pike were present.
I had three takes resulting in fish of 14lb 10oz and 11lb 3oz being boated, and another definite double slipping the hooks before , as the light began to fade, the air temperature dropped considerably and I decided to head for home-probably a good move as by the time I arrived at the mooring, the 'sladle' and landing net were almost frozen solid!
Good to be back 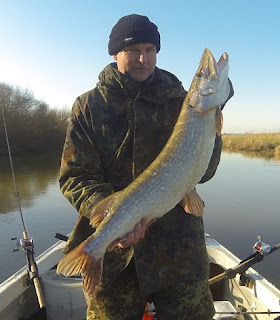 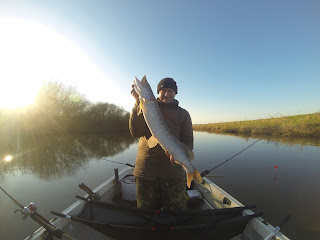