At the moment we're experiencing a series of days with double figure (Knots) Northerly winds albeit  combined with a period of high pressure and relatively settled weather. From the shore, the sea state looks relatively calm however , five miles off it could be a different story although as can be seen in the picture, today wasn't actually too bad and definitely worth poking a nose out to have a look.
In the summer months  cod appeared to be very prolific on the middle distance wrecks in our area and we'd all hoped that they would appear inshore to entertain us during the colder months.
Early signs indicate that this could well be happening as  a few of us are starting to pick the odd fish from reef marks.
I had three modest fish this afternoon on soft plastic lures and marina buddy, Tony also scored a hat trick of 'green backs' although of a much better size in a catch that also included some excellent bass. Well done mate.

I also found small bass on all three marks that I fished, along with plenty of wrasse and a pollack but, for the first time in quite a while I stumbled across a shoal of bass that showed clearly on the sounder and managed to extract a couple of 'easy fish' before having to 'high tail' it to cross the river bar before the tide ran off too much. I guess they'll have to wait for next time. 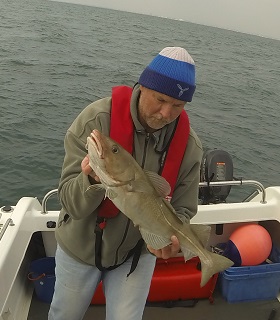