What better way to see in the New Year and celebrate my retirement just hours after finishing my last ever shift than to go river pike fishing with my buddy Dave.
I'd had a bit of a 'send off ' from work the previous evening and, although failing to actually see the fireworks as the year ended, still had a bit of a thick head to contend with this morning.
It wasn't an early a start for me unlike Dave, who had been on the river at the crack of dawn. I really must condition myself more into becoming an early riser .Part of  my problem is that I'm a bit of a 'night owl' and seem to come alive around ten o'clock in the evening, rarely getting my head down before midnight-not that useful for fishing.
River conditions had improved a little since my visits a few days ago, and some of the colour had dropped out of the water, although it was still far from clear. When is it ever.
We did our usual thing of hopping dead bait rods (two apiece)along the stretch of water to be fished, searching all the likely spots whilst discussing all things fishy. The only interruption came in the afternoon when my far bank 'bluey' was taken by this upper single-a very welcome pike following my recent form. 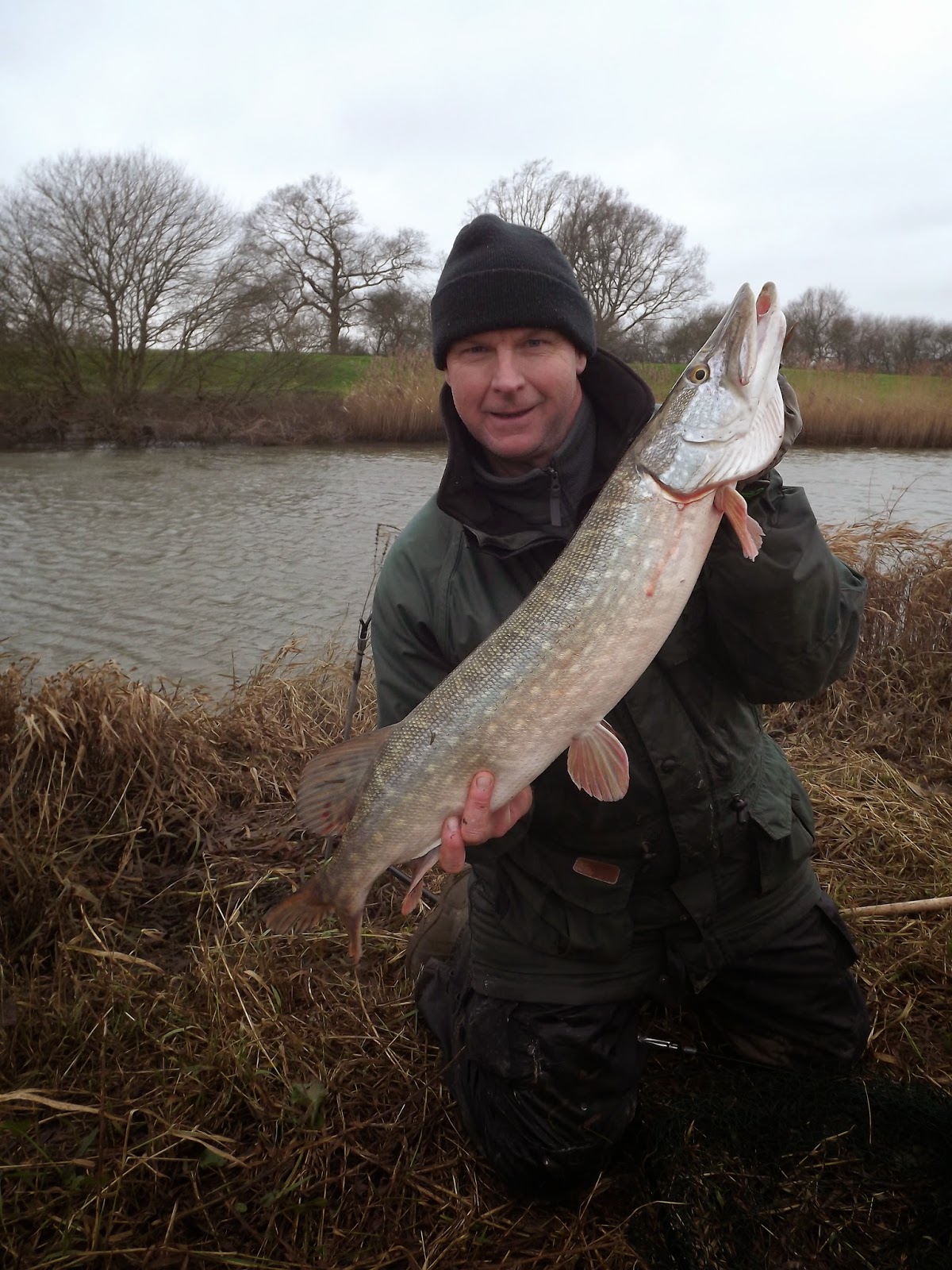 It did occur to me that this fish, like so many we've had from the river, took the bait very soon after it had been cast into the swim. Its likely that it quite literally hit the pike on the head, or at least landed close to its 'lair', the disturbance causing the pike to stir.
Of course this 'instant take' not always the case, and I've had some exceedingly good pike having sat in one spot for perhaps a couple of hours but generally, I feel that keeping mobile , albeit fishing static dead baits, is a more productive method. With pike fishing, location is everything and once found they can be usually quite easily tempted.
I've tried to pare down  the equipment I carry when piking to a minimum in order to make changing swims easier but, I still think there are improvements to be made in this department, and perhaps I should be moving faster, say spending as little as twenty minutes with baits in one swim.
This approach also serves to keep things interesting as with every new spot tried, comes renewed enthusiasm and If, at the end of the day, I've failed, at least I know I've tried.
I've already ditched my bite alarms relying solely on floats for bite detection and have even swapped my baitrunners for some comparatively light weight Abu 6501 multipliers which have a built in 'clicker' to warn me of a run should I fail to see the float disappear. .. Maybe its time to jettison my comfy seat too.
However, part of the enjoyment of these trips with Dave is sitting down with a cuppa and a bakewell, and having a 'gas', and I wouldn't want to miss this so perhaps this 'speeded up' approach is best saved for solo outings.
Whatever the case today, it was very pleasant to celebrate the day with some fishing, and rewarding to see a pike- a welcome injection of enthusiasm for the year ahead.
Posted by Unknown at 15:35