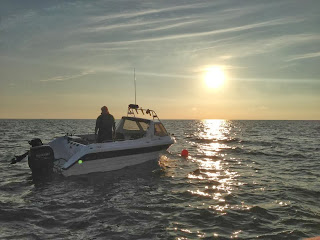 All the above are , in the grand scheme of things,  minor critisms that can be easily remedied-others may not feel the same way having bought a brand new boat  but,'each to their own'
The overall build quality of the Warrior  and its fittings , especially when compared to other boats(Orkneys excepted) is excellent. Mine still looks like new, apart a few tiny knocks which must be expected, and its quite common to see old Warriors still looking very good indeed after some years of use.
On the sea which is, I suppose where things really count, I've got no complaints. Apparently , the heavier standard 175 handles better according to those 'in the know' because of the extra weight. I'm not 'in the know', so can't comment.
This boat is certainly fast enough (I average 20kts-she'll do 30 plus if I've got the balls for it),and is  able to maintain a good speed when things 'kick up' a bit and feels very sure footed.
She planes quickly and easily and holds a 'level' ride , keeping things very smooth. Slamming? what slamming? I drive her so she doesn't slam. Go get a 'cathedral' hull if you wanna 'slam'.
Freeboard is excellent, which is extremely important for someone of my dimensions , and in fact one guest crew of normal stature actually commented that it was a bit too high for him and would make returning his bass a little awkward.
She sits well at anchor and behaves herself in a following sea though its rare that a following sea can catch me up anyway.lol
Beam and head seas are just brushed aside and, from my experience, despite popular 'forum' opinion, she's a relatively 'dry' boat  compared to many I've ridden in, though the excellent optional folding canopy is a massive boon and provides good protection from weather at both ends of the spectrum when fishing as well as motoring.
The seats are a brilliant design,and  driving position(custom fit) and visibility are all first class. In thick fog, I can stand to helm  and easily get the best  possible vision over the cuddy roof. I could fit a wiper to one of the screens and indeed this has been suggested but personally, I don't think it will be necessary. I can see out fine-Rain-X sees to that.
Its fashionable on the forums to 'knock' Lowrance electronics. The standard package has proved to be easy to use and it's caught me plenty of fish and got me where I wanna go so I've no complaints.
Anchoring through the hatch is easy though, if you're any wider than me it might become an issue.
A cushion on the forward seat, which you kneel on when hauling, would be a welcome addition.
Choosing the Export version mainly for the removable fuel tanks and uncluttered deck has given me a huge , usable 'working' space which I've begun to really appreciate. I've fished three people with no problems on two occasions, one a long distance 28nm shark run,  though obviously two anglers would be more comfortable. Weight distribution is nowhere near as critical as you might think on a boat of this size and the final testament-bigger boats on the marina don't go out any more, nor stay out any longer than I do and believe me, I'm careful.
Despite the high original cost, and to be fair, she wasn't cheap, the first year of ownership has really broadened my fishing horizons and I've been able to do a lot more than I expected mainly because, with the speeds available to me, long distances are no longer an issue.
Boats are very personal things and most people tend to go with what they have, and learn to love them. I actually believe that , with notable exceptions which are generally widely known about, there are very few 'bad' boats manufactured nowadays.
I've tried to highlight the 175's faults in this 'review' , and also attempted to be objective but its been tricky as I've had so much enjoyment with her this past year. Long term ownership is beginning to look more likely. What's unlikely, unless I suddenly become very wealthy and get bored of catching sharks, Is that I'll want to 'down grade' to a bigger boat. There's a lot to be said for being happy with  your' lot'.
Overall, I'm very happy indeed with 'Jupiter', in fact, as a truly functional 'fishing machine', glitches aside,
I cannot find fault with her..............but I would say that wouldn't I.......after all.......she's mine!

Don't forget...Got anything to say??? Leave a comment or drop me an email. 'completeangler@sky.com'