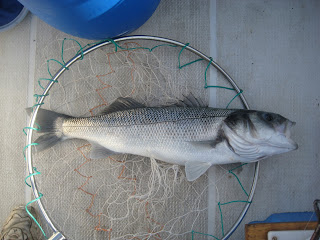 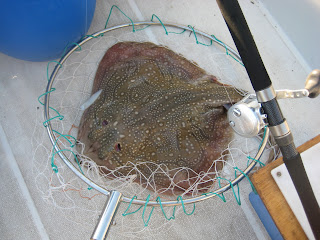 Mark 29 was the chosen venue and some super cuttle from Fishyrob the bait for this one on what was a relatively small 4.9m tide A 7-00 start to catch the river bar saw me sliding down a frost covered pontoon ramp and having to break the ice on the boat cover.
I was the only marina boat out and, although calm to begin with, the wind did pick up well into double figure mph speeds ,during the day, from the SW which was not really a problem as most of the fishing was with the flood tide, and therefore 'wind with tide'.I was sheltered by the cuddy anyway.
If I'm honest, prime target was cod but, as last year showed, these 'off reef'' ground marks can throw up some good bass at this time of year, and i did have my favourite bass bait on the hooks.Reel clutches therefore were set loose in anticipation of a 'run' from something with a spikey dorsal fin.
A steady procession of dogs was punctuated by this really nice double figure undulate until, later in the afternoon, one of the Avets screamed into action and I knew immediately that i had a good bass on the other end.
10lb 4oz on the scales and 73cm on the tape-a fat and beautifully conditioned fish and my second double of the year.A quick deck pic was taken as I was desperate to get her back safely and after a minute of gripping her by the lip in the flow, she kicked hard and disappeared safely into the depths- i was one very happy bunny.
A second bass run did occur a short time later, which unfortunately, did not result in a netted fish. But at least it meant that there were more about and is indeed food for thought.
The 'BIG THREE' Spirit, Lynander and Jennifer's Pride were reporting bait smashing bream on the reefs and some small bass whilst drifting with lures. To end the day I decided to try a couple of drifts myself on the adjacent reef and this produced small bass almost immediately.
A great day to be out and a rewarding catch- I'm glad i decided to stick it out with the baits and not be tempted by lures on the reefs and, I'm also pleased that by hitting the 'off reef' ground, I avoided the 'bait robbers' dogs excepted.
Posted by Unknown at 13:39