Tim had invited me along on this three day trip to make the crew number up to four. I'd fished briefly with Tim a few years ago when I'd introduced him to mullet on the Arun, and in return he'd shown me the ways of the Adur carp resulting in me catching a superb 'twenty' from the river.
Also along on this trip was my old mate Russell Brown who I hadn't fished with for a number of years so It was good fun to hook up with him once again, and Tim's Mate Pete-a proper character and former acquaintance of the late, great J.D.
Having just returned from France I was late  getting up to Ross-on Wye and met up with Tim and Russ at the tackle shop at mid-day.They'd fed up some swims and had already caught a couple of barbel so it was looking promising.Both Tim and Russ added to their total that afternoon-Tim taking his first ever double and Russ taking a further five single figure barbel , but both mine and Pete's swim didn't produce.
Next day I was offered a chance in both the producing swims but, I'd invested quite a bit of bait(hemp and pellet) in my own swim and felt confident it would produce so declined both offers.It was to be the right decision.
Five barbel picked up my pellet baits, biggest at 10-04 and 10-06 both personal bests, first doubles for me, and best fish of the trip.
Russell's swim produced good numbers yet again-nine I think, and Both Tim and Pete did very well on another section of river which Russell and myself would fish the following day.All told, it was a red letter session.
During the afternoon the river keeper visited us for a chat and whetted my appetite with tales of thirty pound pike that had be caught from the stretch.He also encouraged me to take a trip up with my small dinghy a he felt there was so much of the river left un-fished which would undoubtedly produce big pike-food for thought indeed.He also assured us that we'd been very lucky to get three doubles from the stretch,
The following day, in the same pairs, we swapped beats and fished a stretch where the only swims were 'cribs'-man made structures similar to groynes protruding into the fast flowing river that created slack pools behind them. There were four on this particular stretch and whilst Russ elected to fish the Tim and Pete's 'banker' from the previous day,I chose one for myself a way upstream.
With the heavy rainfall of the previous day the river actually rose about a foot while we were fishing forcing us to move up the bank.Russell took a couple of small barbel from his swim before leaving at lunchtime for home,and the only action in my swim was a lost barbel which slipped the hook after snagging some weed. With Russ departed I decided that the 'banker' had a little more space so moved in and subsequently finished the trip with a couple of nice chub-one on the very last cast.
A cracking trip with plenty of good fish caught and no end of lively banter. I shall look forward to a revisit. 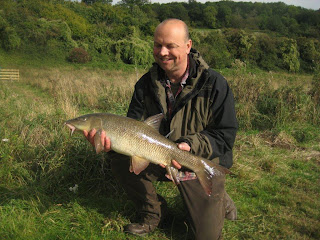 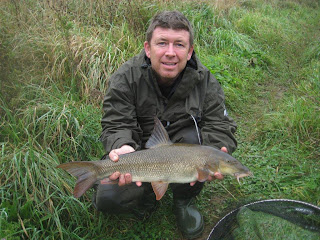 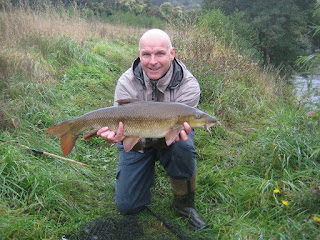 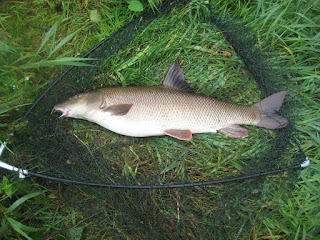 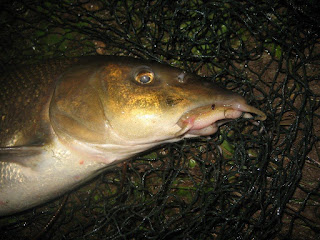