I took my mate 'Bass Junkie' Pete out with me in Jupiter this evening for a long talked about, but never before realised 'lure only' run .
Pete's currently 'boatless' having recently sold his trusty Regis, he is awaiting delivery of a newly designed Orkney which should broaden his horizons on the fishing front.I've had a sneaky look at it behiond the Orkney factory gates and it certainly looks the part.
Pete's a plastic guru, very skilled in their use and does very well with catches on his own local patch which he knows like the back of his hand.
However, I wanted to see what he thought of one of my own recent finds so called the shots when it came to choice of venue.
The river bar has recently been dredged causing a considerable drop in water level at low tide and providing the marina staff with plenty of dredging to get the inner pontoons floating again at a safe angle.My boat has been moved to an outer pontoon in the process which I'm not complaining about.
It'll take a bit of getting used to the new river level and this evening I gingerly crawled across the 'bar' at a snails pace despite our chosen departure being well within the time limits.
I needn't have worried, there was enough water but i had to be sure.
On reaching the mark it didn't take long to find fishy movement on the screen, and it was reassuring to hear Pete's interpretation of the information was similar to my own. Confirmation that I'm beginning to learn how to use the equipment properly.Pete's sounder is identical to mine.A couple of 'new' lumps revealed themselves during the session and i was rather flattered when Pete excitedly copied the numbers into his mobile phone.
Jigged soft plastic baits was the chosen method and it was very interesting to see how delicately Pete works his lures.I picked up some really useful information on patterns and rigging and on an evening like this, when you had to work for your fish, it paid dividends,
As well as plenty of attention from cuckoo wrasse, some of which were boated, we had good sport with about a dozen plus ballan wrasse around the 2lb mark including a nice 4-04 to my Fiiish Minnow.Pete also pulled up a small pollack .
We're both convinced bass were present, although nothing like the numbers as on my previous trips. A mass of 'green' momentarily showed but perhaps they just didn't want to know . As darkness approached we had to call it a night as there were more than enough pot lines out on the route home to be an issue.
An excellent couple of hours fishing.
A day later I was to learn that on both these last two trips I had very likely been within yards of  that same bass shoal that gave me such great sport last week.Of course, I'll never really know as the sea is not a small place. The learning process continues but MASSIVE thanks must go out to Pete and others(you know who you are) who are helping me build up an intricate picture of the reef marks that we fish.I WILL find those bass again. 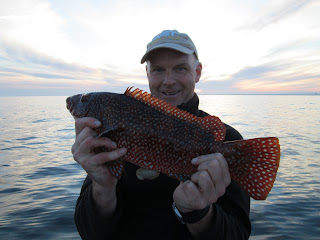