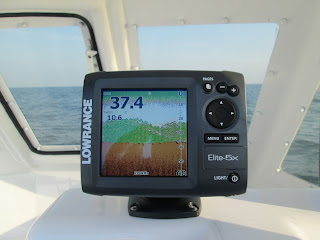 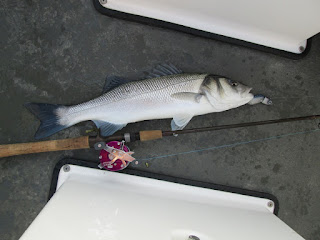 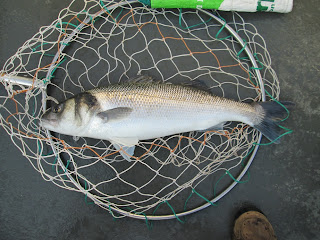 I managed to get away from work at ten past five, and by six my Fiiish Black Minnow lure was sinking through the depths- the Warrior speeding me to the mark very quickly.Although the tide was still flooding at the pontoon, 'out there' it had already begun its ebb.
With water temperatures over the magic 10 celcius(check out the sounder) there just had to be bass about.Last year I had a double in early April.
Some gannets were milling around the locality so, thinking they must be there for a reason, i decided to use them as a target.
The first few drifts were quiet and then suddenly a mass of green with squiggly bits around the edges, appeared on the sounder and the action began-the first bass of the year-the modestly sized one in the middle pic.......and then along came another.......and another......and another....almost a fish a drop.
Drift speed was no more than half a knot and the shoal showed up for only a few minutes I assume being extremely tightly packed.Once the 'green had gone, the bites stopped immediately.
By altering the drifts laterally and giving the shoal what i judged to be a wide berth on each return run,i managed to stay in touch with them but it all took a bit of tweaking.A couple of times I lost them and it would be very easy to be deceived into thinking that no fish were about.Luckily i was the only boat for miles and i'm convinced this helped as there was minimal disturbance.
Each time the 'green ' was relocated it was hectic fishing with sometimes two or three fish per run through.
In the end i had 28 bass in exactly two hours,most sub 3lb but with half a dozen in the 5lb range and three exceptional fish of 7-02, 8-04, 8-06.I think these better fish were caught on the edge of the shoal and they certainly gave a terrific scrap on the light baitcaster outfit which is perfect for this kind of fishing. I didn't want to waste time setting up self take photos so the deck shots had to do and ALL the bass went back safe and sound.
In one of the bass' mouth I spied a 4 inch sprat so the Minnow certainly matched the hatch and was very effective with its shrouded hook. That said i did try out a white stinger and , although it worked, i felt the Minnow was better.
Two very plump mackerel (also with sprat inside)took the lures and these were taken for the evening meal.
I still had the shoal within range when I had to call it a day at 8pm and could have carried on. The minnow body was mullered with all the action and had lost its tail-probably to a wrasse.
Fantastic fishing and probably the best inshore boat session i've had so far.Will i be able to find them again I wonder.
Posted by Unknown at 10:32