Once again , taking advantage of an, all too rare of late,window in the weather,I took Dave out in the boat with me today.
We could have tried for the plaice and there have been a few, very few,bream showing on the reefs but i wanted to try for something a bit more exiting....bass on livebaits.
We started at #6 feathering and sabikiing for bait.First take was for me,a garfish -a welcome spring sight. Apart from that we only managed to attract small pout but, in the bait tank they went.
I then proceeded to show Dave how the float livebait method worked.........or indeed,didn't work.We failed to attract any bass at all. If they were there, then i'm sure we'd have made contact.
we thoroughly drifted the whole reef but to no avail and i decided that a run to the 'smoothound bank'with baits at anchor would be worth a go.
Doggies, some of a reasonable size were the only willing takers so it may be a little too early for the hounds to show.
Finally we visited #9 to try drifting with soft plastic baits.A very plump and hard tugging wrasse of a couple of pounds saved the day for me and Dave nicked a small pollack before we decided that the sea was bumpy enough to call it a day.
Running home in the building sea we heard Dick on Lynander telling Steve over the radio that his battery had gone flat and that his jump pack was in his truck back at port. I stepped in to offer some assistance by running home and picking up Dick's jump pack, though it was a very bumpy return ride out. Nice to be able to return a favour though! 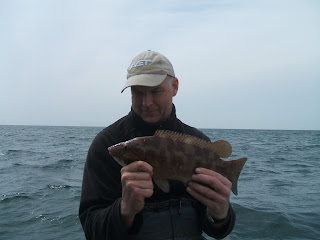