A few months ago Neil and Mick of Littlehampton charter boat 'Spirit Of Arun' fame organised an on line auction for places on a boat trip to raise money for St. Winfred's Hospice in Chichester. The event was also held in honour of Dave Roberts-a keen tope angler and regular on 'Spirit' who lost his battle with cancer as the auction was running, and spent his last days in the hospice.
I was extremely lucky to win a place on the day, and a chance to sample some of the tope fishing that 'Spirit' is famous for.I haven't actually been out on a charter boat trip for thirty years,so the whole experience was quite new to me.My fellow 'winners' included Lucas (The Doc),Martin(Hoges on WSF), Big Paul (who's all of five feet tall in his heels) and his partner in crime, and comedy, Barry (Bazza) O'leary, and the day began with a breakfast kindly supplied by the proprietor of the 'Dinky Doo Diner'-a greasy spoon of some considerable renown, and regular haunt of L.A's, that's LittlehAmpton to the uninitiated, finest charter skippers and crews.
Once aboard  the big 'Lochin' , we travelled a considerable distance to a mark that isn't even on my paper chart for the area we usually fish, and settled the anchor in a gully approximately seventy feet in depth.To begin with the fishing was lively. I took the first tope-a fish of around 40lb, quickly followed by a smaller tope to Martin, and subsequently a second, and bigger tope again to my bait. Unfortunately, the action subsided after that and the fishing became extremely difficult with just the odd dogfish taking a shine to our mackerel baits, although Mick did manage to boat a really nice smoothound of about 15lb.
Although I was naturally, thrilled with my captures, I was a little disappointed, as were Neil and Mick, that the other members of the party couldn't have shared more in the experience. That's fishing I guess.
Mid morning and we sent off a wreath, and held a minutes silence to honour Dave- a particularly poignant moment as we watched it slowly disappear on the tide.
A short move to a nearby bank in an attempt to improve the fishing was carried out in the afternoon but, to no avail. I did however,briefly connect with something sizable that 'ran' with the bait. Another tope probably but, having felt a slightly familiar 'head banging' through the braid i felt it could have just as easily been a decent bass-who knows.
Back at the port and I was awarded a terrific prize indeed for best catch of a boat rod and reel to add to my armoury, donated to the cause by Snowbee, and the day finished with a pint in the Nelson to celebrate and toast Dave.
The day,  for me, was a fascinating insight into the running of a charter angling boat with lots learned about the tope fishing potential of the area and a revisit in Jupiter is a must.
Neil and Mick both worked extremely hard to successfully give us all a thoroughly enjoyable day afloat , the banter and humour was non-stop , the company brilliant,the boat and crew mightily impressive, and we managed to raise over £1100 on the day for a very worthy cause-Dave would no doubt have wholeheartedly approved. 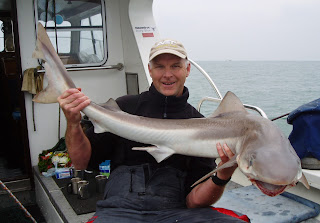 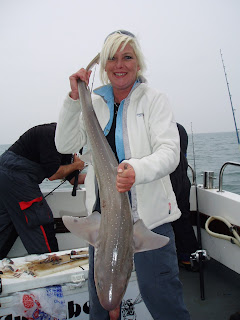 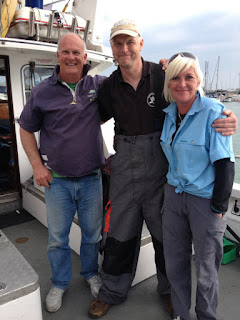 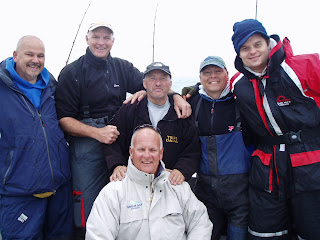 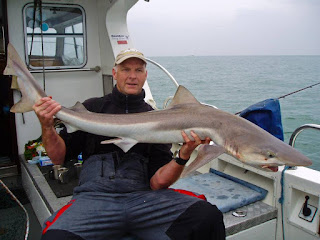 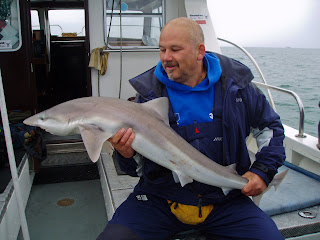