I decided to have another run up to the pits for a  trip this evening after work to see if i could make some progress with the tench fishing.I'd been tipped off by a youngster,  on the previous outing, that the tench fed keenly, during the lower light levels of evening, and that his Mum,a pit regular, had once taken a nine pounder from the water.
Armed with only a pint of red maggots the usual two rod feeder tactics were employed targetting  seperate emerging lily pads about fifteen yards apart in the swim.
Within minutes of the first cast settling I'd had a run and a (4-13) was in the net.Shortly after, another run followed and ,whilst fish number two(5-08) was still in the net awaiting unhooking , the other rod almost leapt of the pod caused by another blistering run(4-08).This gave me the rare opportunity to get the 'double' shot in the photograph.
The action was hectic for a couple of hours with ten takes in all, eight landed, and two that managed to slip the hook.The bailiff's ticket was used as the scorecard to put together my most impressive tench haul ever including two more 'fives'.
Prize of the evening however was the biggest at 7lb 15oz accurately weighed on my new set of digital scales. A lovely fish that smashed my previous Burton Mill personal best fish by almost two pounds and managed ,during the fight, to temporarily snag me in both lily pads in the swim.As the temperature dropped the feeding spell  abated a little but, by then, i used up my pint of reds anyway.
According to Owen the bailiff, several of the pits in the complex have produced double figure tench  so, you never know, that p.b might have a limited shelf life.
Actually my previous P.B was a fish of 6-03 from Burton Mill but caught in January 2008 on a sardine!!!!! whilst pike fishing.It wasn't alone either as another similar fish took a liking to my pike deadbait on the same day. Centre pic below. 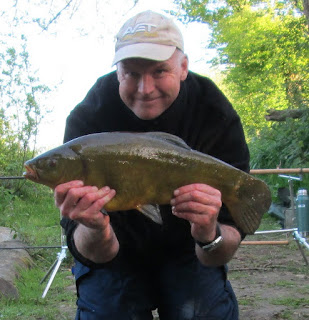 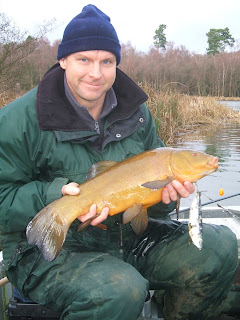 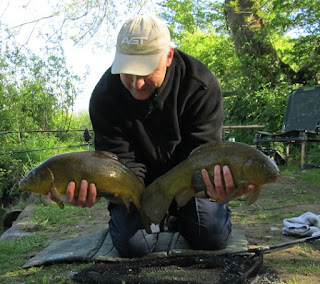