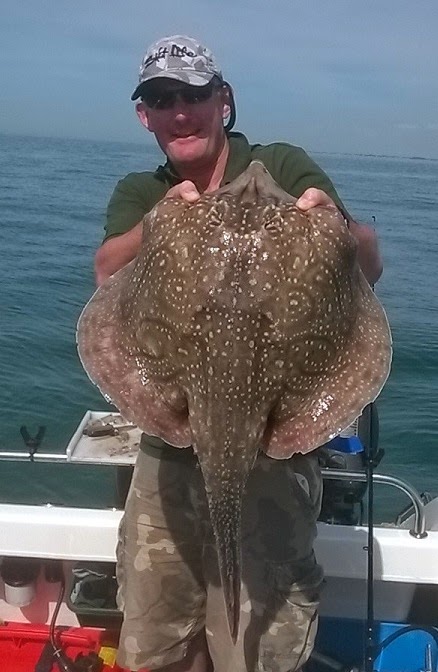 Today's target  was actually  a smoothound for Dave, hence the decision to fish initially at 'smoothound bank' but as is the case with a lot of local marks this year, undulate rays were present and that's what took our baits. Half a dozen of them showed , all doubles and this begs the question; why are we seeing so many this summer?
It's possible that, because commercial fishermen are no longer allowed to land these rays , the stock is seeing something of a revival and this is indeed a popular opinion.
Personally, I think that, like many species , population levels alter randomly over time and one only has to look at the large numbers of smoothound showing in the past two decades locally to see that this can be the case.
In the 1980's a smoothound was virtually unheard of and yet, they are now one of the most popular shore species in our locale. Undulates are  prevalent at the moment,so much so, that beach anglers are targeting them so perhaps their time has now arrived.
Whatever the case they are a generally quite a big fish, stunning to look and well worth the catching.
Posted by Unknown at 11:16