There's a very fine line between success and failure in  mullet fishing.Sometimes just one fish is enough to make a good session,especially if the odds are stacked against you, as they were  today.With so few fish showing downriver yesterday,I headed up to the mudflats for a LW session for about 2 1/2 hours, after finishing work this morning.
As usual plenty of (Inaccessible)mullet were showing on the walk down, and some serious lip marks on the exposed mud at the top flats but, when I reached the lower flats there was nothing.Stone dead, and it felt like it too.Sometimes you can just sense when things aren't right.Not only that  but the wind had suddenly kicked in big time -enough to bend the rod! I'd misread the tide,dithered a bit a home,and probably arrived a bit too late as the water was pushing in very fast,no doubt assisted by the wind.
Without as much as a sniff of action and,not wanting to be cut off ,I moved up to the middle flats after an hour or so, and fished the drop off.Again, very little evidence of  fish except, perhaps, the odd swirl in the ,by now, quite murky water.
I was beginning to think I would blank-fortunately a rare occurrence SO FAR this year but,I talked myself out of it and persisted..........and, after another hour or so, a  bite.......I think.Difficult to tell with so much surface disturbance, but I was pretty sure it was 'fishy' movement on the float.
Another positive bite confirmed something was there and then,on the next cast the float buried itself,and I was IN.Lucky hit really as, being dog tired,there was some considerable delay in my strike .Trying to avoid the line running on the rocky ledge,I probably bullied the fish a bit too much as, after beaching , I noticed a tear in his lip but,  he turned out to be a pleasing catch at 4-04.
Rather obligingly,and probably knackered  due to my uncompromising playing style,he decided not to swim away immediately once I'd set him back in the water,but instead, sat quietly between my feet until I literally pushed him off.
With my mood lifted and brimming with confidence,I moved up to the top flats to avoid getting wet,fished on for a while, but to no avail.I don't think I've ever fished the float here at this state of tide,but it was easy going being completely out of the main flow.
Although the wind had dropped off a little,tiredness got the better of me and I'd had enough so made my way back to the van feeling pleased that my stubbornness had paid off.
One thought for the future-It now turns out that this venue could be fished around a whole tide,possibly with a bit of raking of the top flat at LW and perhaps treading in some mash. 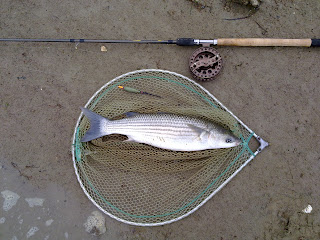