The weed situation on the beach at the back of the house is dire.It something that occurs every year and restricts attempts at the smoothounds which I'm sure are there at the moment.
Jan suggested we go out in the kayaks for an hour or so ,after i'd got in from work,and take the spinning rods too, as the sea was particularly calm.Jan has her own kayak ,and I have free use of my mate Andy's, as he's storing it at my house for the time being.
After making our way out to clearish water about 500yds off, It was  evident that there were fish about, but not in great concentrations.I quickly hooked up and lost a couple of fish which i presume were mackerel on the small dexter,and shortly after Jan hooked and boated a nice little bass of about a pound and a quarter on her krill.
For the next half hour or so we drifted down tide to the swimming pool and Jan then decided that she'd had enough and we'd paddle back for tea.On the way back I noticed a concentration of gulls about level with the house and decided to investigate whilst Jan continued to shore.
A large shoal appeared and much more concentrated that we'd seen before that evening. It didn't take long to get into the fish and in half an hour i'd caught four or five bass to 2lb all returned, and three mackerel taken for the bait larder.It was quite easy keeping up with the shoal in the yak as in the extreme calm they were very visible obviously feeding on small fry which could occasionally be seen leaping out of the water.Terrific sport on the little baitcaster  outfit particularly the bass who gave a far better account than the fish I catch in the river when mulleting.Great bit of fun fishing. 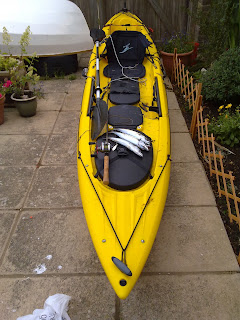