After yesterday's blank i needed to get back on track.The original plan was to launch the boat later in the day at HW but the wind was howling so i decided instead to head up to the mud flats for a morning bank session over the last of the LW .With the wind riffling the surface, there was little indication that fish were there but,as I'd been in this situation so many times before, it didn't put me off.
First bite came quickly whilst i was gazing at something else,looked back at the float to see it just disappear and nailed one of 3-04.Deliberately kept the rod low when playing so i could keep the swim going, and after a short lull the bites returned.Missed a few (bit tired after a night shift is my excuse)but eventually connected with a 'thug' bass of about a 1lb.I'm sure the other bites, including a 'sail away' were mullet.Let's face it-who misses a bass bite on bread!
By now the tide was flooding fast(big tide anyway) and my route to the middle flats which is where i'd usually go at this time,was blocked.Instead i glanced down to the sluice at the bottom of the stretch and, in some calm water, there were some mullet showing.These sluices are a regular feature along the river but although I've seen mullet in many of them,most are difficult to gain access to,so I tend neglect them.
I think Paul F-J and Dave had had fish from here in the past but i can't remember trying it myself.In with a bit of mash and soon had a bite which i missed(still tired)After messing about with the line, which was regularly tangling around the reel in the strong wind,I nabbed one which went 2-05 and scrapped hard in the usual Arun manner.After unhooking the fish I checked my hook to find that it had opened up a bit.
The new Preston rod seems to be deceivingly powerful, as this is the second time i've done this recently.Andy suggested that I tended to bully my mullet having seen me play one last week-perhaps he has a point.Maybe I just need to get used to it. On a positive note,i've not lost one yet with this rod but, I won't draw any conclusions until the end of the season.
I've also been experimenting with heavier floats -11bb this time.They're easier to control and don't seem to be any less sensitive than my usual sizes.
Good session.Will I ever get tired of catching these fish!Even the tiddlers! 11 down 39 to go. 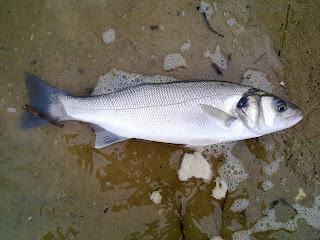 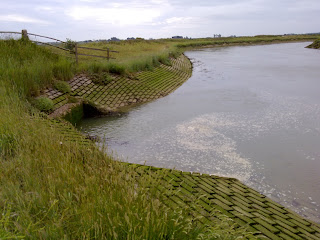 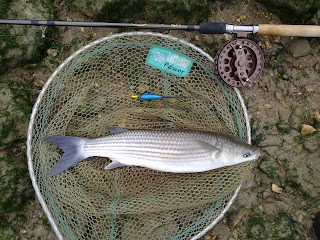