If there's one thing that brings me deep joy apart from catching a mullet myself,it's seeing a mullet virgin pop their cherry.


Russell's a good mate of mine who's been showing me the ropes recently with Sussex inshore boat fishing .He's the owner of a superbly equipped Orkney 20ft 'Pilot House' moored at Littlehampton and the two of us have had some blinding trips out this summer after tope,hounds ,conger,bream etc

We were due to venture out on Thursday after bass,but both being cautious types,we decided that the wind was a bit iffy,and we'd give it a miss.Instead I suggested taking my own,somewhat smaller Orkney, up the Arun for a spot of mulleting.

Russell will be the first to admit that he's not the most patient of anglers-he likes to be 'on the fish'.Also, his idea of 'light tackle' would be an uptider and an Abu 7000,and he explained to me that he'd never handled a freshwater float rod,let alone one with a centre pin reel attached to it.What with all this, and the unpredictable nature of our chosen quarry,I was beginning to wonder whether my bright idea was so bright,as we made our way upriver.

I needn't have worried.The river's fishing well at the moment and it wasn't long before I'd found a group of mullet and quietly 'parked ' the boat about 20yds upstream of them, with a view to trotting a float down the flow.(Thank heavens it was a tiny neap tide!)

A quick five minute lesson on handling the kit,mashing the bread etc and we were away.Very quickly, I had a three pounder in the boat-What luck! " It's really not always this easy" I started to make excuses.....

O.K half way there.At least I proved to him that it could be done.Now I REALLY needed HIM to catch . I stopped fishing, set my rod In the holders and left the swim to Russell.There were still fish evident and.....they were swirling around the mash.A nail biting half hour later, punctuated by several missed bites,and accompanying expletives from my pupil,and the float dipped once again. This time, his timing was spot on.

It was an average sized mullet...2-12 it turned out, but Russell was stunned by the little fellah's fighting prowess,especially in the ,by now, quite substantial current.The expletives were similar in nature,but a rather happier tone and nobody was more relieved than me when the little blighter was safely in the landing net.The look on Russell's face?......priceless!

After this it was plain sailing,job done, pressure off, and I could sit back and relax whilst Russell mastered the centrepin and lightweight float rod in splendid fashion.

Two more fish of a similar size came to the boat in the next couple of hours in different swims and by the time we'd run up the slipway,there was one more mullet 'convert' in the bag.

" I suppose if the weather's a bit iffy ,we could always do this again" he said, as we towed the boat home.

Not big mullet by any standards,but great fun,and incredibly satifying. 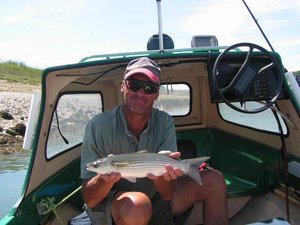