Simon always seems to bring  good luck with him when he boards 'Jupiter' and I don't think we've ever had a trip together without catching some decent fish.
Today's initial target was tope and, with a combination of small tide and good weather forecast, the long run to the eastern solent marks was undertaken.
The tope were indeed in feeding mode and it took very little time at all to get a take-about a minute in fact. We caught steadily through the remainder of the ebbing tide bagging a dozen decent tope in total-Simon catching this new personal best fish of 41lb. 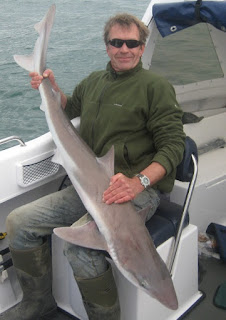 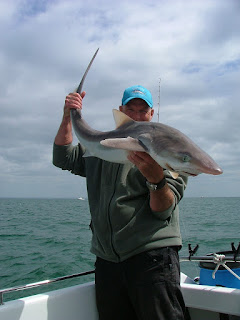 They were joined by the odd dogfish and thornback ray but things did slow down a little as the tide slackened.
Contrary to the weather forecast, the wind speed increased somewhat and, combined with a tide flow going in the same direction my anchor continually dragged making fishing the 100ft mark all but impossible.
I tried several times to reset the anchor but, with little success and it appeared that several other nearby boats were experiencing the same problem so we decided to cut the tope fishing short and try for something else.
Eventually we found some shelter on a shallow reef mark but having wasted a considerable amount of time ,by now the effect of the small flood tide had waned and we were left very much in 'dead' water catching pouting in the increasingly rough sea.
Anyone else but Simon would have been happy to 'throw in the towel' but when I suggested that the fishing would possibly improve when the tide started to move again, I could obviously see that there was no way this guy was going to give in. I was happy to continue so, continue we did.
Sure enough as soon as the ebb kicked into gear the bream, which with past experience happen to be rather good bream on this mark, also slipped into gear.
We took a dozen decent sized fish with bests of 3-10 to me, and 3-14 to Simon ...another personal best fish for my crew.
The feeding spell was however, quite short, and as soon as the initial surge of the tide lessened , which is a characteristic of this mark, the bream appeared to disappear!
No matter, we'd had an excellent trip  and by sticking it out and not giving in had amassed a good catch of fish.
As a footnote to this piece as I write, I've just learned that Simon, who is an excellent shore angler, has landed his third P.B in a week by catching a 13lb 1oz bass. Well done that man! 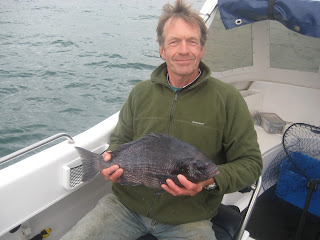 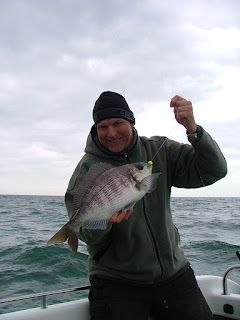