Bass have recently been relatively easy to find often showing up in quite large shoals although, they still need some serious searching to find them. Al joined me on Friday and the plan was to catch some live pouting for bait over slack water, then drift the ebb tide on the same mark, one of our large well known reefs, for bass.
The pouting were easy........the bass much less so. In fact we couldn't find a single fish to take our baits despite continually drifting and searching. A few small bass to 2lb were found on lures, along with some wrasse, but the target fish remained elusive.
As the winds built making drifting a little uncomfortable, I elected to anchor up on the same reef and we fished for bream with bait taking some nice fish on the remainder of the ebb in the process. 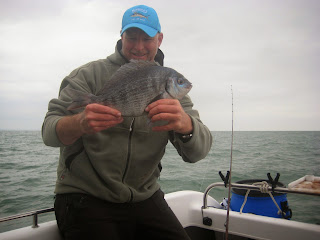 The flood tide produced far less action, although the obligatory dogfish put in an appearance.
Rather annoyingly, I managed to leave my superb  grapnel that 'Stainless Steve Engineering' had made for me about four years ago, on the sea bed. The cause was a frayed  rope which had probably got wrapped around a rock due to the boats motion in the, quite rough, conditions.
Needless to say, a new one has been ordered but in the meantime, my good mate Pete Cook has come to the rescue with the donation of a spare grapnel that he had lying around in his garage-cheers mate.
Sunday, and I had Brian with me. The plan initially was to just settle down on the 'pick' and fish for bream but this was soon quashed and the lures and live bait rigs were set up once again.
We started by drifting the remainder of the flood with lures picking up some wrasse and, a first for me- a black bream of a couple of pounds on a lure, in this case a small white shad on a drop shot rig.
As the tide died we filled the bait tank with pout, along with some more bream on the baited feathers, in readiness for the ebb but, the wind picked up.......big time. We had expected it to reach 10-12kts which would have been manageable, but it was far in excess of this making drifting very tricky. We failed miserably to find any bass at all, but were consoled with a few more feisty ballans, and some Pollack on the lures. All the pout were released back to the sea. You can't win them all. 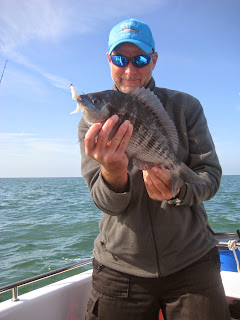 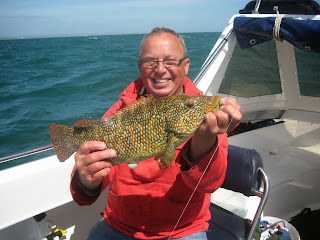