Dave had managed to secure a couple of leave days from work to go fishing and, as I was really keen to try and catch some decent perch from some of our club's still water venues, we decided to pool our resources and give them a try.
My experience with 'spikeys' is somewhat limited, having rarely fished for them by design, I've only taken a trio of sizable fish (over one pound)in my angling career , one of which was caught by accident on pike tackle, . Dave's portfolio is somewhat more impressive,  he's already had some decent fish to over 3lb during this coarse season, and a very creditable personal best of 3lb 12oz from the past.
Mature perch are certainly quite formidable looking creatures with sometimes a rather aggressive look to them enhanced by their characteristic 'humped' back. Unfortunately, their bold black stripes tend to fade a little when caught from 'coloured' still waters(and our tidal rivers) but,by virtue of their impressive appearance, they  remain an impressive fish to catch.
On the first day,  we fished  new water which I'd previously investigated , sussing out the logistical aspects such as the availability of parking for our vehicles. Unfortunately, this didn't prevent me from getting my van well and truly 'stuck' in some pretty serious mud requiring 'rescue' in the form of a tow from Dave, and wasting half an hour in the pouring rain in the process.
The rain eventually subsided, giving way to a clear sunny day , perhaps a little too bright for big perch,  as we failed to find them on this occasion. However, the venue did disclose the presence of  several 'prey' species ,including some tiny perch, so will be well worth a future visit perhaps trying some different swims.
I did get a dropped take on a small live roach bait which suggested  perch, but obviously, I'll never really know the true identity of the culprit.
It was however a particularly pleasant place to go fishing with kingfishers and circling birds of prey in evidence and best of all, not another angler in sight....well, apart from Dave that is.

Day two saw us at an alternative venue again, a quiet still water than sees comparatively little attention from the  angling fraternity at this time of year.
By the time I arrived, late as usual, Dave had already landed a nice perch of a couple of pounds so things were certainly looking optimistic.
Bait of choice for me was a king prawn on the hook, with maggots as loose feed mostly to attract prey fish into the swim which would hopefully draw in the predatory perch.  Dave chose a more 'traditional' approach of lobworm, tipped with maggot. 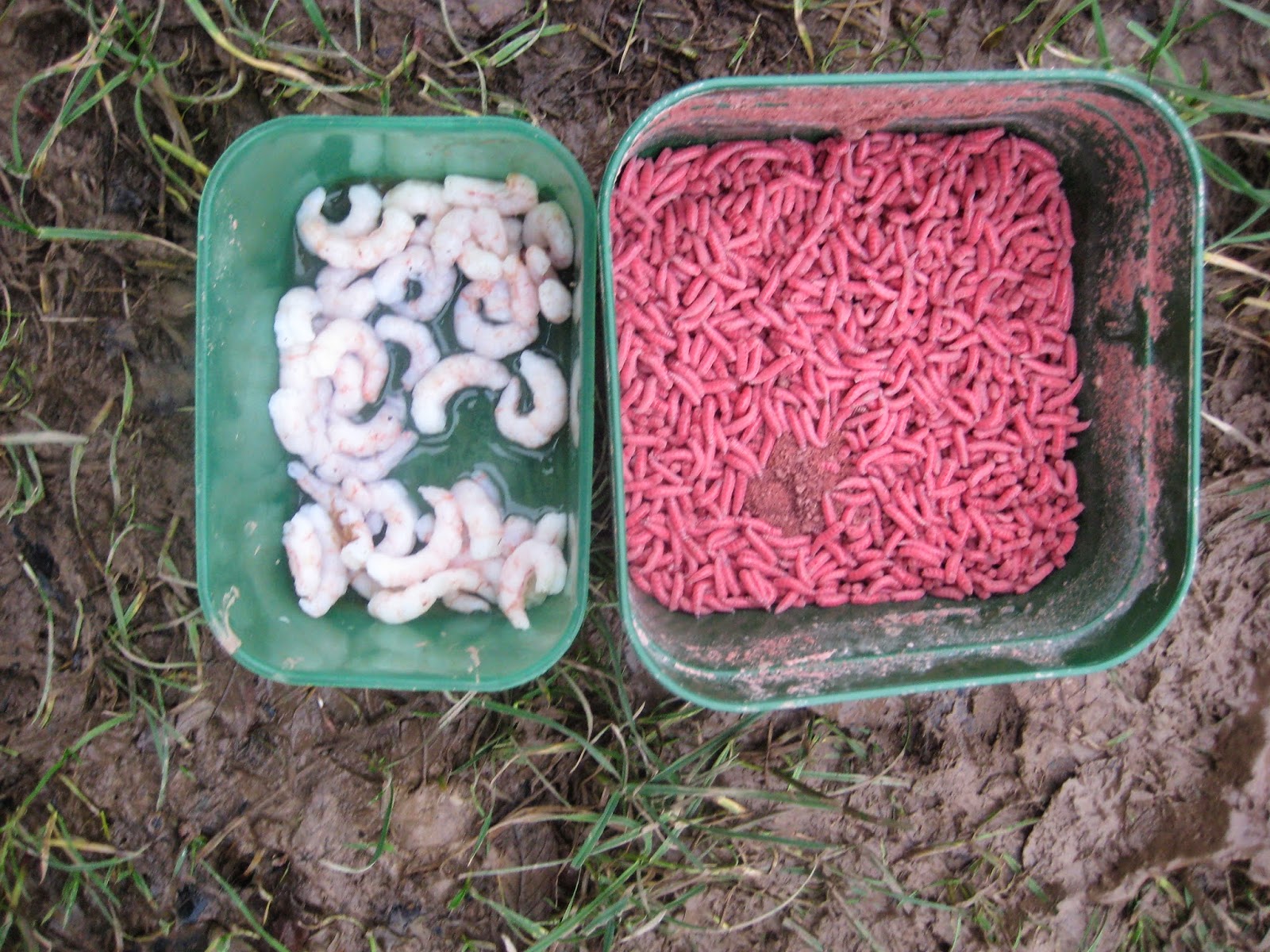 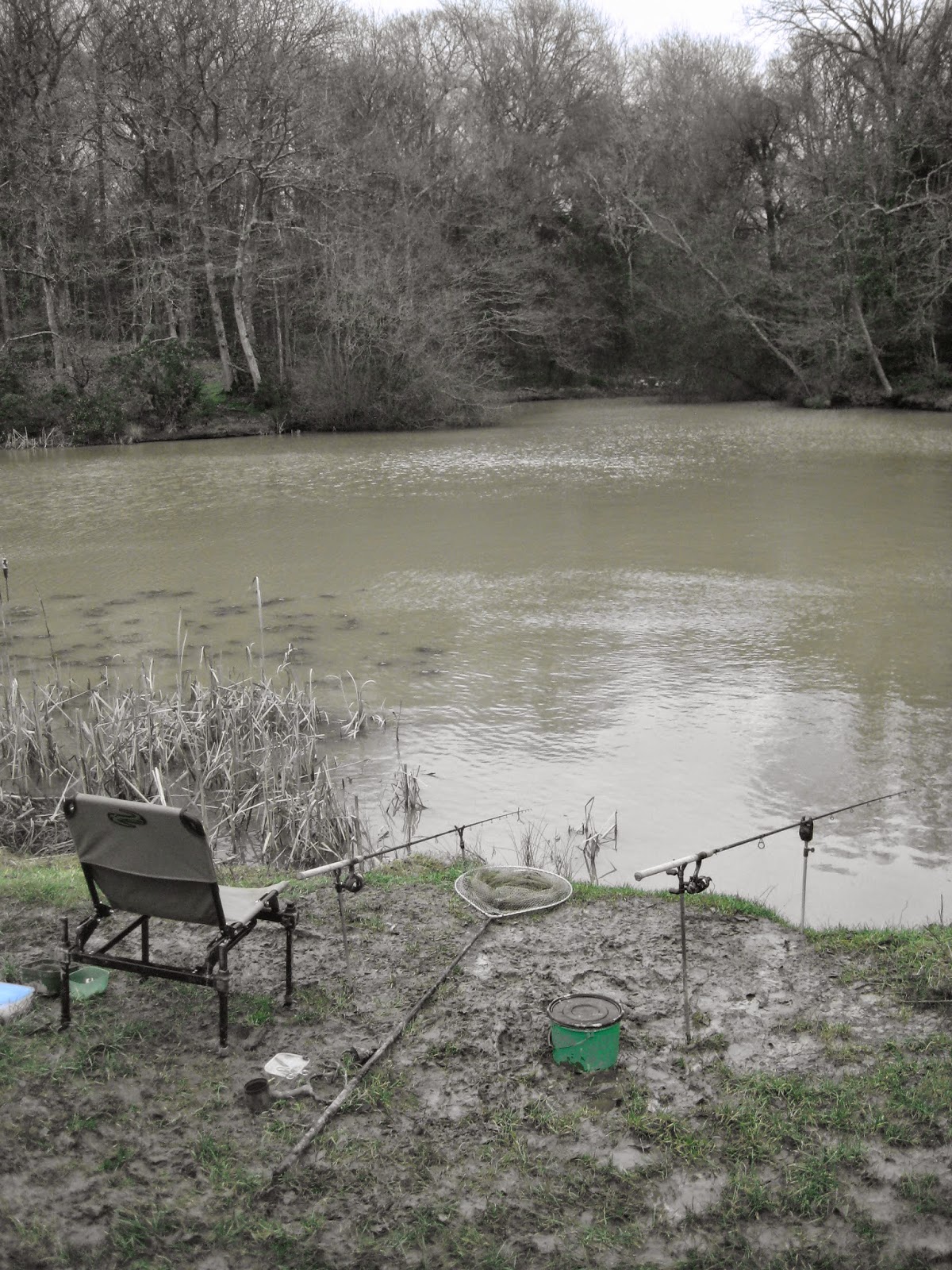 One rod was fished on the float 'close in' next to some lily pads, and another left to fish itself on the feeder a few yards distant.  As you can see above, the recent heavy rain had resulted in this stream fed lake becoming very heavily coloured but , as perch tend to flourish in commercial fisheries, which are almost permanently murky, I didn't see this as an issue.
It soon  became evident that the swim had quickly become populated by small prey fish as the float  indicated that ' critters' were either nudging the prawn bait, or mistaking the split shot for food so obviously the maggots were doing their job of attracting .
Subsequently the float gently slid away and I connected with my first perch of the winter season , a fish of 2lb 4oz and a welcome sight indeed. The fight could hardly be called spectacular, but that wasn't the point, I was just pleased to hit the target.
Thankfully, I'd chosen to use a barbless hook, as the perch had certainly snaffled the bait deep down in its cavernous mouth, but my size 8 was easily removed with the use of forceps and the fish released completely unharmed. 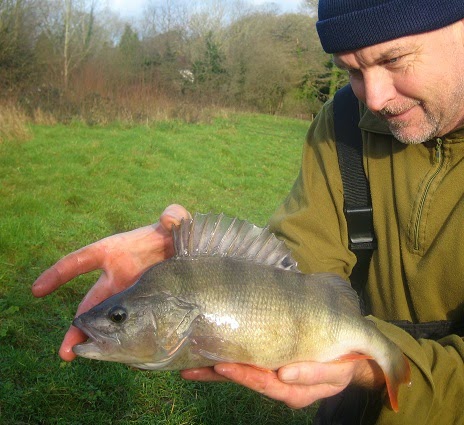 A couple of bumped fish on each  rod, almost certainly 'nuisance' carp, occurred before the next perch turned up once again, to the float outfit, displaying a similarly delicate , slow take. This time a much more rotund specimen was landed ,and slightly heavier at 2lb 6oz. 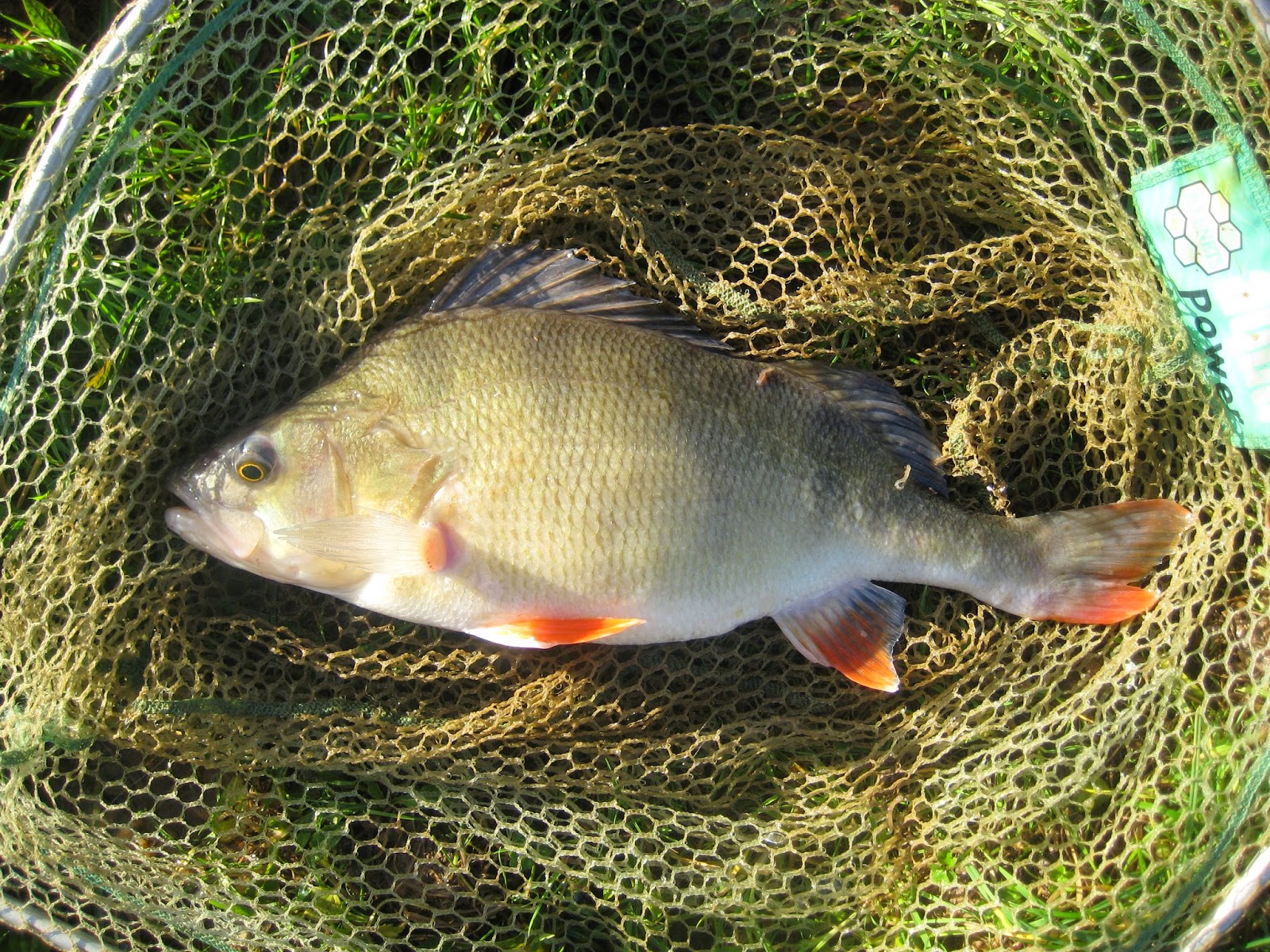 Dave had also matched me with a second perch in the two pound bracket until, during the middle of the day the light levels increased and the perch action slowed right down. We're not entirely sure if there's any correlation between the two events but perceived opinion does state that perch prefer low light levels and are often caught early and late in the day especially in clear water.
The action however didn't abate , and a screaming run on the feeder outfit followed, resulting in this bait stealing interloper -a handsome, fully scaled and lean common carp of  8lb. I had hoped that the prawns might be a bit more selective but this obviously wasn't to be the case. It seems that carp will eat anything. 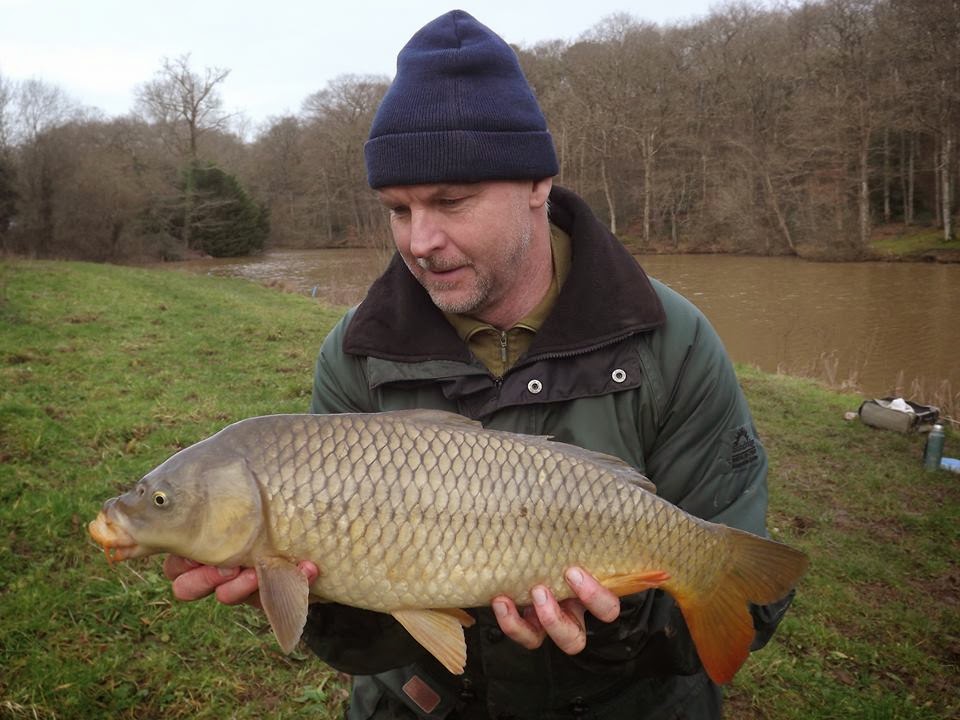 As events had noticeably slowed down I decided to swap to a neighbouring swim, and also change the feeder rod over to a live roach bait attached to a 'dyson' rig with a sunken float.
This was set up on a buzzer and the line left slightly slack to avoid annoying false alarms.
As the light faded, assisted by some cloud cover , perch number three turned up once again to the float fished prawn bait. A slightly bigger fish again,  a personal best equalling 2lb 9oz, and this one did actually put up a reasonable fight. 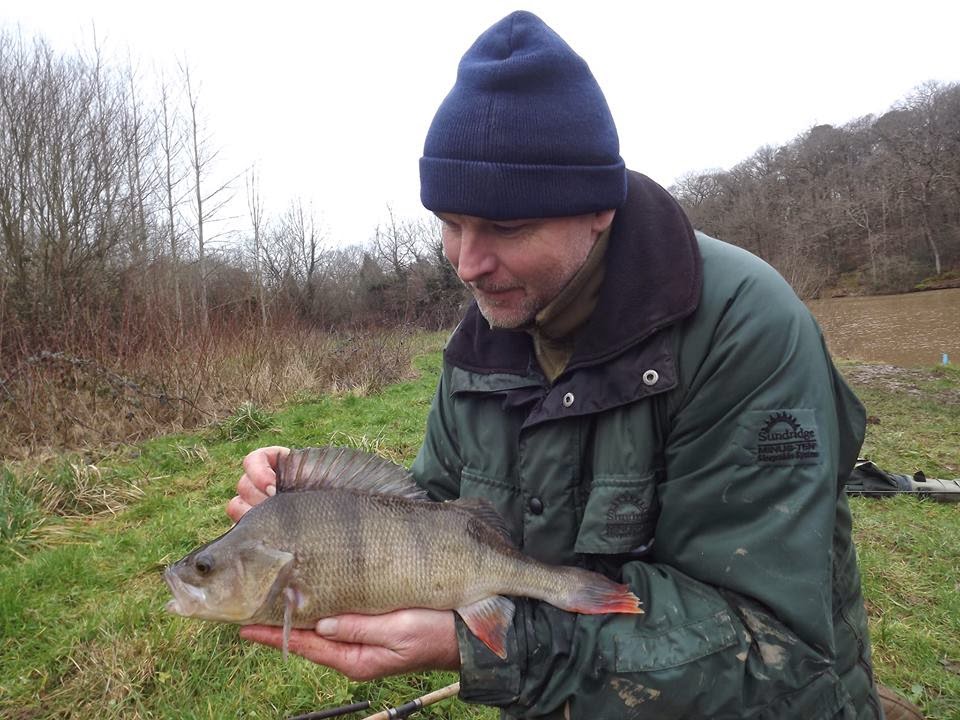 Finally, another all too 'scrappy' carp of a similar size to my first,shot off with the float fished bait, causing mayhem in the process and probably curtailing any further 'perch' action in my swim.
Meanwhile,Dave had also been busy putting together a varied catch comprising, a tench, eel, bream and a goldfish /hybrid 'thingy,' all falling to his worm bait.
Curiously, despite both of us fishing a small live roach, usually a 'banker' bait for big perch, neither was taken during the afternoon and this is a difficult one to explain and warrants further investigation.
What a varied day's winter fishing we'd had but for me, it was the perch that made the occasion and I shall return in search of that three pounder in due course.

For the 'tackle tarts' among you, on the float rod today, I was using a recently purchased Abu 506 Mk2, a design of reel that I was particularly fond of in its original form dating from the 1960s. I'd acquired the reel intending to put it to use as a grayling trotting device, but couldn't resist giving it an airing .
Contrary to what 'traditional' tackle aficionados on internet forums will have you believe, this modern version of Abu's famous closed face reel ,is actually equally as well built as the original, and very similar in both looks and feel, the main exception being the composite material that is used for the main body, as opposed to the cast alloy of the original.
Let's face it, most modern reels have composite bodies nowadays and they're pretty bomb proof .Although I suspect many of the parts on this 'new' reel , are indeed identical to the original,It does in fact have several improvements over the 'sixties' design including a drag that actually works, a selectable anti-reverse and a gear lock which makes the process of removing the spool much easier.
Traditionally known as a 'small fish ' tool, this 506 was well tested today on those carp and performed very well indeed.
If you like this style of reel, I'd recommend you take a close look this version  particularly as , at a shade over fifty quid including four spools and a case, its something of a bargain. 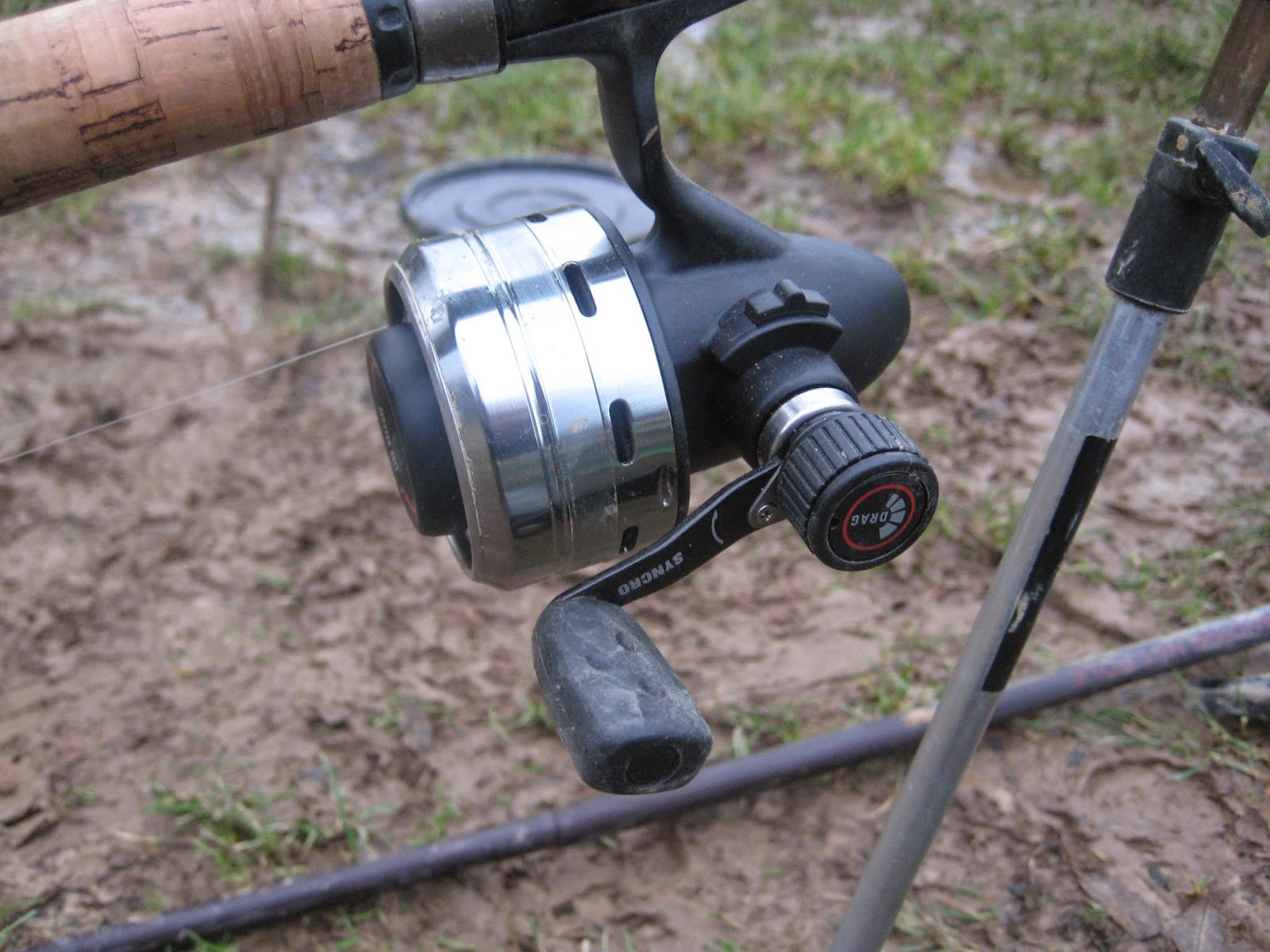