............and finally, the end of regular employment for me too.
After a few months of stalling today I worked my last shift as a Firefighter after more than thirty years of service and I suppose can now be called a 'pensioner'.
How my new found situation will impact on my fishing only time will tell although I'm already planning some trips for the year ahead as well as hopefully being able to expand on the regular stuff I do.
Looking back over 2014, its been a year of mixed fortunes.
Once again I failed to tow the boat up to Scotland to fish for common  skate although this will surely be remedied in the future as this trip demands no small amount of flexibility and the ability to just 'go' when the weather allows.
On the shark fishing front, despite trying very hard, I failed to make contact with a porbeagle ,didn't even get a chance to try locally for a thresher , and just one blue shark trip to Cornwall produced mixed results with two excellent days, followed by two days of struggling.
Locally the spring tope fishing was a bit disappointing although the specie turned up in astonishing numbers, and respectable sizes on the Devon porbeagle run despite not being what I was targeting.
I didn't catch a shore stingray but did get a glimpse of one for the first time ever and will surely be back for another go at these next time around.
As usual , I didn't do a great deal of coarse fishing although the year started in style with the double figure zander ( a first of the specie for me) that I so badly wanted in January. The last pike season 2013/14 was very slow so I was pleased to get that lure caught double in the autumn before the rivers flooded and conditions deteriorated sufficiently to slow the current season down to almost a standstill.
I'm sure there will be a lot more piking done in 2015.
I thoroughly enjoyed my chalk stream grayling trips mostly for having to reacquaint myself  with the necessary skills  involved in trotting a float  with a centre pin reel. They're also particularly attractive looking fish to catch.
Highlights of the year however were two fish caught in my boat not by myself, but by mates who joined me, and two nicer blokes you'll struggle to meet.
Brian's magnificent near record blonde ray in February easily qualifies  for the 'fish of 2014' and provided me with a huge level of satisfaction to boot. The fish also made the angling press and won Brian some tackle prizes in the process-fame at last-terrific stuff. 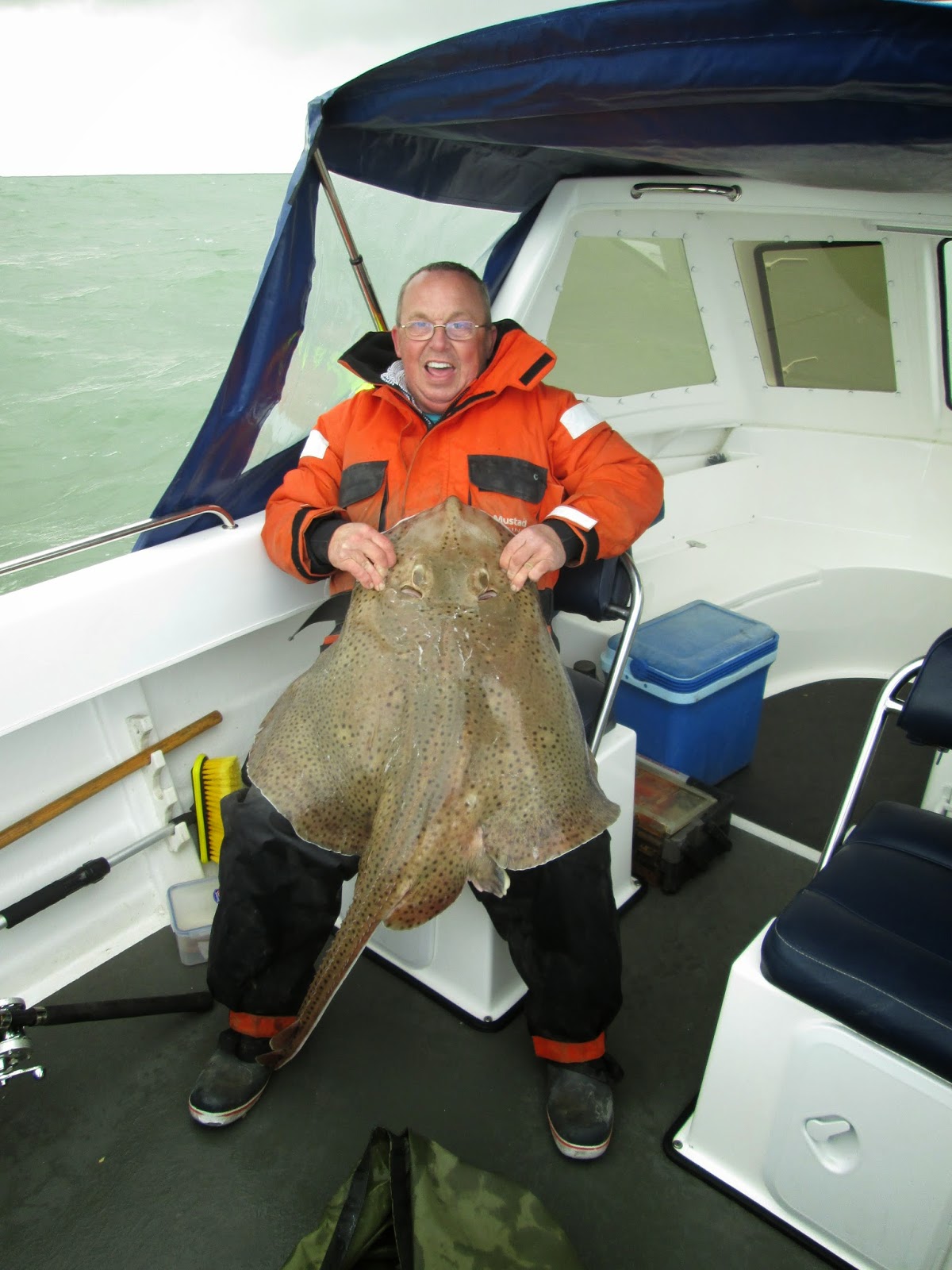 Equally exciting, and rewarding was Simon's monster conger in July which was four times bigger than any fish of any specie he'd ever caught before and made Jupiter's deck seem exceedingly crowded- a priceless moment. 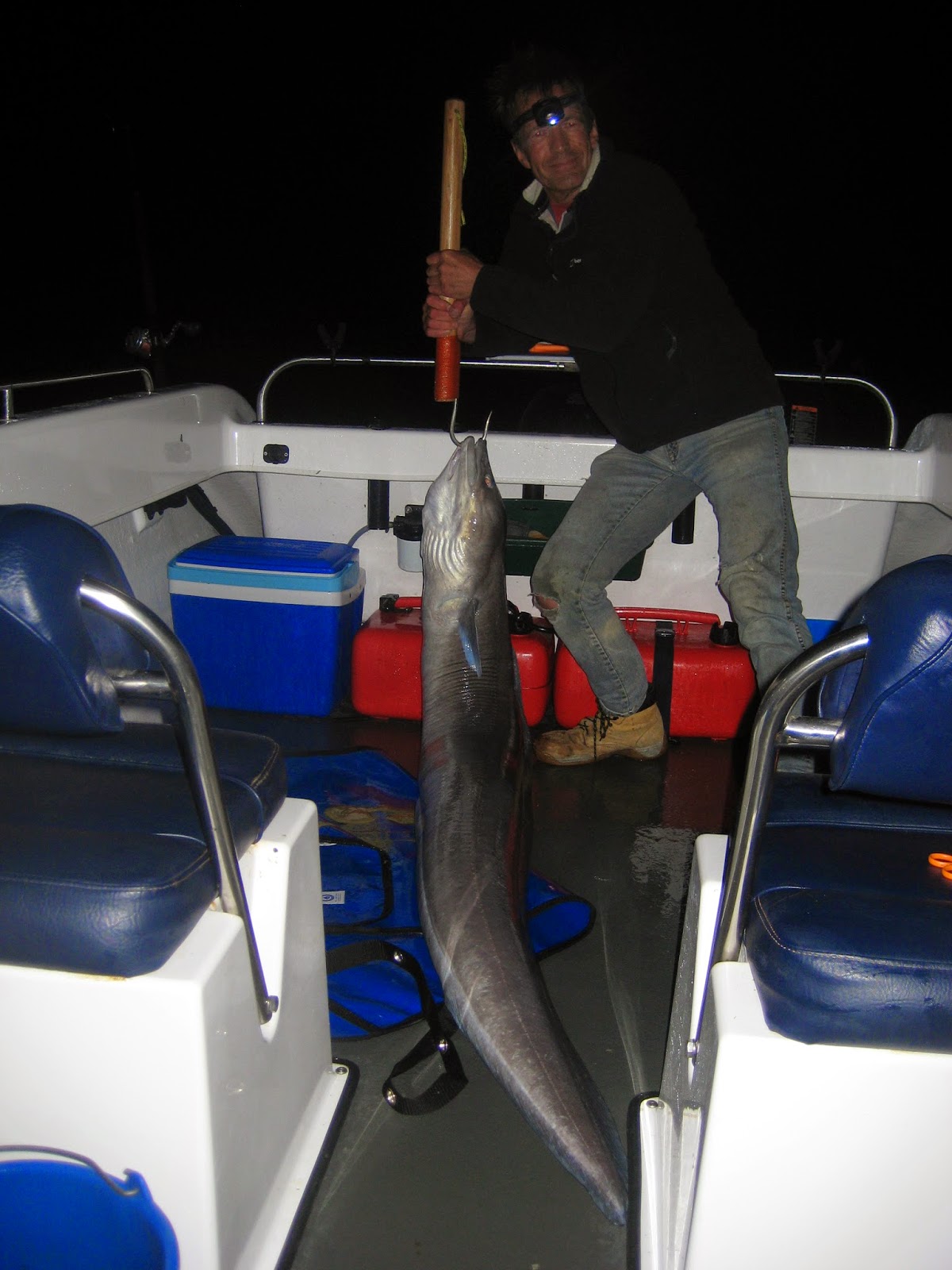 In fact, the conger fishing as a whole proved especially  satisfying  piecing the bits of information together, doing the research  and finding the 'old' mark that proved both so interesting and fruitful.
On a more personal note , it was the progress  made with  lure fishing  for bass and wrasse on the reefs where, at times the fishing was so consistent, and my confidence levels so high that I left bait in the freezer and went out with just a lure rod because its so much fun . There is also the added advantage of less cleaning up to do afterwards.
It appeared to me that just as I'd started to get the hang of things with the 'plastic' it all came to an abrupt end due to the winds,  and I'm really looking forward to the early spring and the chance to get back out there again with just a box of lures. In the meantime however, there is plenty of piscatorial activity to be getting on with.
I've no real hard and fast plan for 2015 but intend to get back into catching a few more grey mullet, a specie that I've tended to neglect in recent years, mostly because of taking up inshore boat fishing.
Coarse angling too will, I've no doubt, be given a bit more attention, both on moving and still water, though I  will prefer to seek out the more secluded venues with , not another soul in sight. I've yet to catch a nice perch and a big eel wouldn't go amiss either.
I suppose the beauty of being an 'all rounder' is that there is always fishing to be done somewhere regardless of the time of year and climatic conditions. I'm equally happy watching a pike float from a frost glazed river bank in the depths of winter as a shark float miles offshore on a flat calm sea in high summer, and the sense of anticipation,  and feeling of excitement when said float suddenly vanishes  is just the same in either case. There is some thing rather magical about watching a fishing float ,Isn't there.
Fortunately I'm still young enough (ahem)not to be particularly bothered by so called 'bad weather' . It just means adapting the fishing ,and clothing to suit the conditions, and getting on with it. Nowadays there is absolutely no excuse not to be warm and dry whatever the weather throws at you. I know it's not the 'British' way but frankly I find people who constantly moan about 'our' weather a tiresome bore. 'Put a coat and hat on and get over it'.is my mantra. 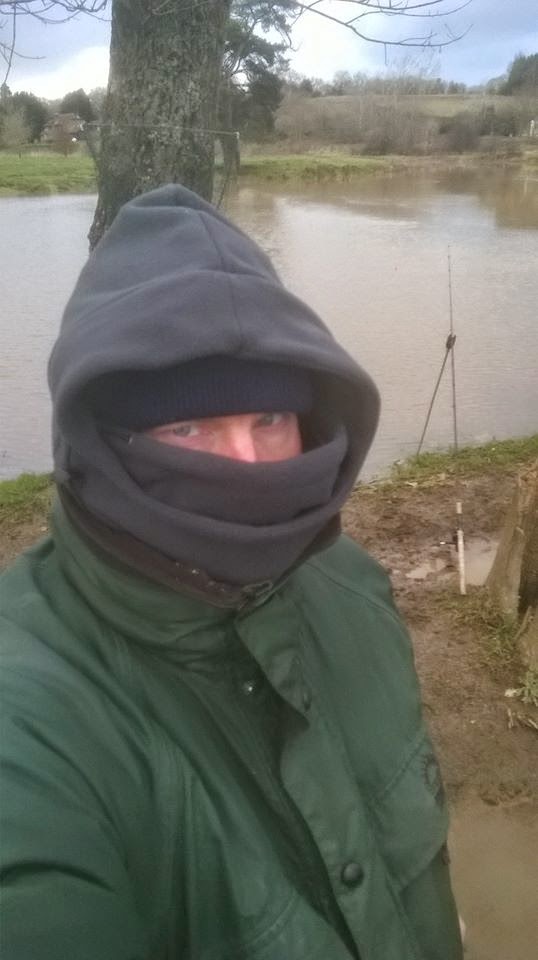 My final trips of 2014 were both after river pike and unfortunately, apart from some very determined eels to keep me on my toes, were  unproductive , target wise. Such is the nature of tidal river piking.

Having been stuck indoors with 'man flu' over the holiday period, although still working my final shifts (my last nights were Christmas Eve and Christmas Day), I was desperate to get  a healthy dose of fresh air, despite the river being a little too coloured for comfort.
Also, it was a last chance to try one of my club stretches before it closes for the remainder of the coarse fishing season due to a deer cull taking place.
Despite not succeeding, it was a relief to get out and do some prospecting particularly on swims I'd not fished before, or not visited for some time.
As the year drew to a close I had plenty to ponder on and ,with an impending 'life change' just around the corner naturally those thoughts turned to fishing, plans to hatch, schemes to unfold, and what better way to do it than whilst watching a float.
Posted by Unknown at 15:01