Something I've rarely done in the past is to investigate new waters without actually fishing them although angling literature, particularly from the past, always seemed to extol the virtues of the, usually closed season activity, of 'scouting' around sussing out venues, fish watching etc.
Of course nowadays things are slightly different. The 'closed season' only applies to rivers and I suppose , for most people, their valuable  spare time is best spent actually fishing but, if you listen to some of the older generation of anglers,  us 'youngsters' want 'instant success' in our fishing and 'everything handed down to us on a plate'.
Perhaps this opinion,  is a reaction to the emergence of 'commercial' type fisheries in recent times both, in the game and coarse sectors of our sport and possibly has some justification but, I believe these venues do have their place, and provide much enjoyment to the angling public at large. I also believe that they play a significant role in keeping the fishing tackle industry afloat, and therefore benefit us all with the  technological development of the equipment we all use.
Personally, I tend to avoid commercials but only because, being  thoroughly anti -social, I prefer to fish venues where there is a distinct lack of other anglers which is why I find the rivers so appealing. Rivers seem to be out of favour with the general angling public probably because logistically, they are that much more difficult to fish than still waters.
The big problem with rivers in the winter, particularly in my local area , is that they are severely affected by rainfall often to the point of being unfishable from the aspect of safety. Sometimes its impossible to actually see where the bank is which could prove a little tricky if you decide to go paddling.
Usually this type of weather is also associated with low pressure weather systems and their inherent high winds which curtail my inshore boat fishing activities somewhat.
By virtue of necessity, a solution must be found so I look to still waters, preferably quiet ones.
This winter I decided to obtain an additional club membership in order to expand the waters available to me and today I decided to 'recce' a few of those venues........O.K I'll admit, I did have a couple of pike rods in the van just in case..
A quick look at the river confirmed my suspicion that it would be high and coloured however with hindsight, perhaps I should have given it a go as a mate of mine has recently been getting the odd pike from moderately flooded river venues locally. Whatever the case, the club book had a new lake on its list and this demanded further investigation.
What I discovered was actually a chain of lakes that I was to later learn, following a bit of 'googling' , had been a former carp fishing syndicate water. I'll freely admit that I'm not much of a carp angler but , also mentioned in the 'blurb' ,was that one of the lakes held some good perch and this did attract my attention.
The lakes turned out to be pretty remote , far from easily accessible by vehicle and, as it was a mid week day in the middle of winter-deserted........ideal.
I very much doubted whether there would be any pike in them, and have not subsequently had that confirmed, but being stream fed, the water was the colour of chocolate anyway so I decided to leave it for another day and check out another venue on the list.
Surprisingly this next  little visit turned up another valuable piece of information . This particular lake was also stream fed , yet remained almost perfectly clear and, as I knew it did hold some pike I couldn't resist  a couple of hours spent watching dead bait floats. I didn't catch but it had been a fitting end to a useful day's 'work' and future plans had been hatched.


Classic Reels Still In Use Today.

The Mitchell 300 is well known for being 'the' coarse fishing reel to have in the 60's , 70's and 80's. They appeared to be everywhere and the French company must have sold millions of them and rightly so as they were a very good quality product.
Mitchell also made a full sized beach fixed spool reel in the shape of the 386 which I believe was based on an earlier model ,the 302, and these proved equally popular among sea anglers. These models also spawned the faster retrieve 402, and 486 versions which were painted in a rather unusual, though not unpleasant, navy blue.
Less well known however, is the intermediate sized reel that Mitchell produced-the 306 pictured here. There was also a faster 406 version and, I believe, a later skirted spool model, the 316.
I do have a distinct memory of seeing these reels attached to the pike rods of one 'Chris Binyon' who appeared on the front page of an Angler's Mail/ Angling Times circa 1972 (anyone remember this)
The 306 is a attractive device , the perfect size for pike or bass fishing (with baits) and lays 15lb mono very well on its relatively narrow spool. The spool oscillation system on these reels was known as a 'planamatic' line lay , and it does work very well  ,with one spool oscillation taking four complete turns of the handle or sixteen turns of the rotor.(306)
There was also an ultra light model-the 308 which used the same gearing and line lay system-a true gem of a reel which I also have in my 'collection' and was , at one time, my main choice for mullet fishing.
I purchased the 306 in the pictures, probably an early 70's model,  several years ago from 'that' auction site in the U.S.A for the princely sum of eleven quid.  It cost almost as much to ship to the U.K but was still a bit of a steal as it was pretty much 'as new'.
They can still occasionally be found today at bargain prices and, because they are so well built ,usually rarely show much mechanical wear.
Paired up with a 'Chapman's Dennis Pye' split cane Pike rod that I  owned at the time (a veritable 'beast' of a rod with a claimed 4lb test curve) the outfit assisted me me my first ever 20lb river pike on New Year's Day 2008. Foolishly, I sold the rod , but still have the reel today ,and have recently added a manual pick up (PUM) with the intention of giving it a workout in the surf for bass, coupled with a light 1-3oz rod. 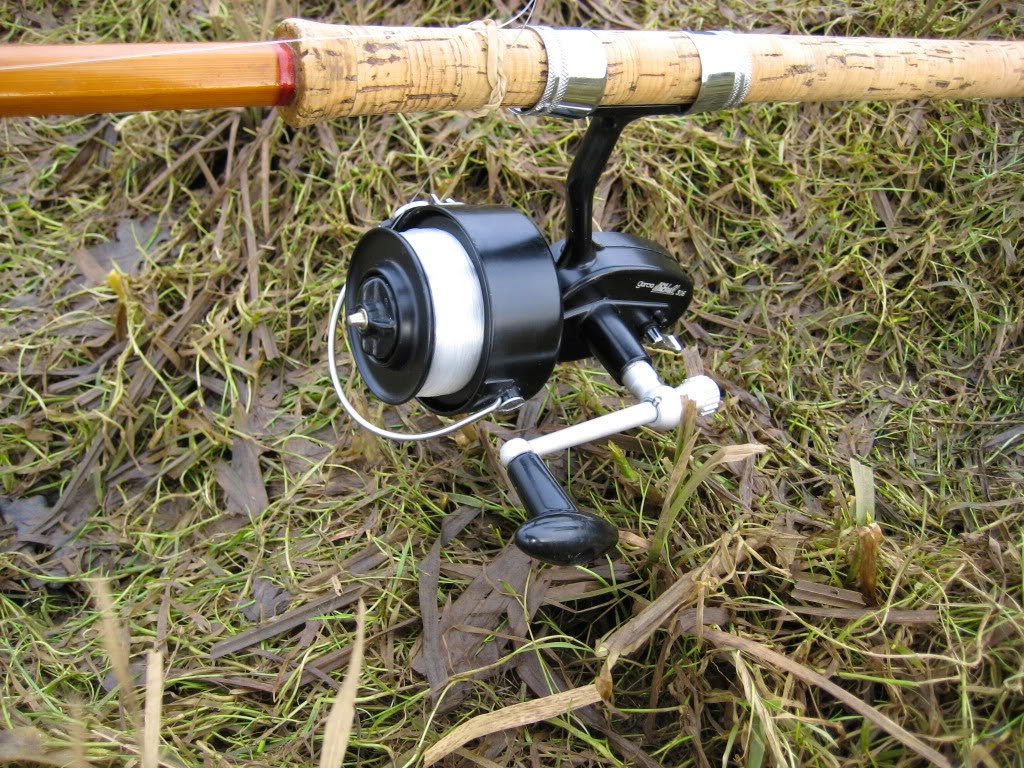 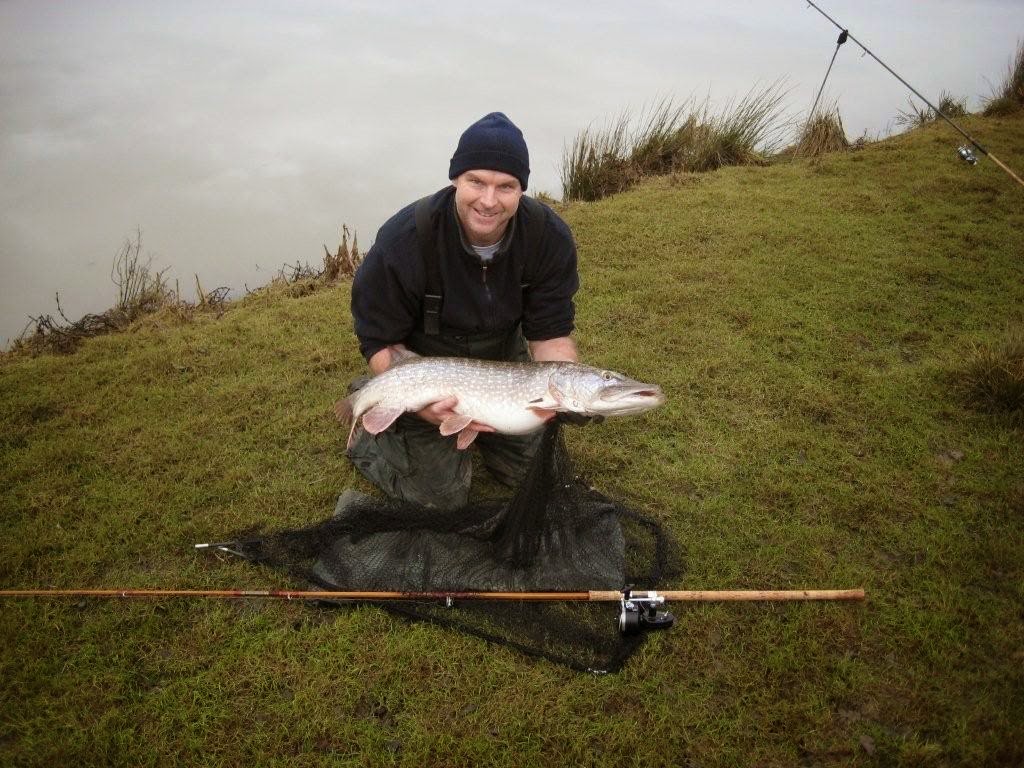 Following on from my Senator thread, Barbel Dave has requested a bit more information on the Penn Jigmaster and in particular the narrow 501 model.
Penn introduced the Jigmaster 500 (wide spool) in 1958 and billed it as a fast retrieve (4;1) lure fishing reel probably suited to vertical jigging metal lures from a boat. The narrow 501 model followed in 1965 and even higher speed (HS) versions with a 5;1 gear ratio (505, 506 ) were soon added to the range. The 500 Jigmaster is still available new today in both left and right hand wind guises.
One major design advantage of these reels is the 'one screw' take apart feature(also found on Squidders and Surfmasters) allowing the reel to be easily dismantled into frame, spool and gear drive plate components simply by turning a thumb screw. This makes spool changing or, more importantly, a thorough rinse in freshwater after each session, an absolute doddle.
Interestingly, Penn also produced a 500S model with the thumbscrew on the opposite(non-gearbox )side plate.
The 500,501 Jigmaster reels are fitted with plain bush spool bearings which IMHO, is a major plus on the ease of maintenance front, the 505,506 models have ball races.

I like narrow reels. They sit much better on the rod and don't display that 'rocking' motion when under stress that some wider reels are prone to.
The 501 version is an ideal sized reel for general U.K boat fishing especially as modern thin braids allow the use of smaller capacity reels and the gear ratio, and generous spool diameter means that, unlike other Penn reels of the same era, it's no snail.
These reels also have a 'decent' clicker with more than enough resistance in free spool to cope with quite fast tide flows yet loud enough to wake you when a tope screams off, or a conger slowly skulks away with your bait.(tick, tick, tickety , tick)
A 500 model can easily be converted to a narrow 501 simply by replacing the reel stand Penn component(30-49) same as a 146 Squidder, 100 Surfmaster and all Mariners, cross bars and spool which are all readily available parts.
Both my 501s are 'genuine' models sourced cheaply but my regular 'user' (on the right)has some slight improvements over the standard model;
Alloy spool - can be found on later 501 models or purchased as a new spare part. Plastic spools are a little delicate and plated brass a little heavy and tricky to cast.

Solid cross bars- These definitely stiffen the frame making the reel feel more solid and can either be custom made, purchased as an aftermarket add on, or again found on later models. One piece alloy frames are also available for the true enthusiast (Tiburon) but are not cheap.

Stainless steel gear sleeve- I converted mine to left hand wind so needed to replace this part anyway but these are available from Alan Tani in the States and are worth their weight in gold.
Its unlikely that the standard component (brass) could be damaged in regular use but the s/s replacement is more accurately engineered and the handle is a tighter fit.

Bigger drag star- (10-49) component from a Penn Mariner deep sea reel-I've got BIG hands. In order for the thicker drag star to fit, the spacer bar underneath needs to be carefully filed to allow the drag stack to fit, and the drag to work smoothly.

Mag brake- My own little concoction that I fitted because I generally cast my baits away from my boat even when fishing down tide and it irons out any 'wrinkles' which seem to occur when casting with thin braid from a rocking boat. Simply, a small mild steel washer is araldited to the inside of the side plate and then thin 1mm disc magnets are set in place until the desired braking effect is reached. Non adjustable(unless you dismantle the reel) but works a treat.

Pinion gear is lightly 'dressed' with a file to improve spool engagement when shifted into gear.

Clutch is standard 3 disc HT100 greased with 'Cal's' star drag grease (can't recommend this highly enough), is very smooth and easily gives 12lb direct pull. 5 disc stacks are available on Alan Tani's site but not really necessary in the U.K. I've hauled 50lb conger and tope on this reel with no dramas.
Main internals are lightly coated with waterproof marine grease(same stuff I use on my outboard) and a tiny drop of 10/40 engine oil is added to the bearings after every rinse. End float on spool is adjusted to a 'gnat's knacker' and she's slightly under loaded with 30lb spectra type braid. I've never had an issue with braid getting behind the spool.
Incidentally, left hand wind conversions involve replacing main and pinion gears, gear sleeve, bridge and a little judicial sculpting with a Dremel tool to the side plate, although 500 left hand side plates are available.
I reckon the total cost of the reel was less than a new Jigmaster. A cracking little reel that I actually sometimes  prefer to use than my Avets....... 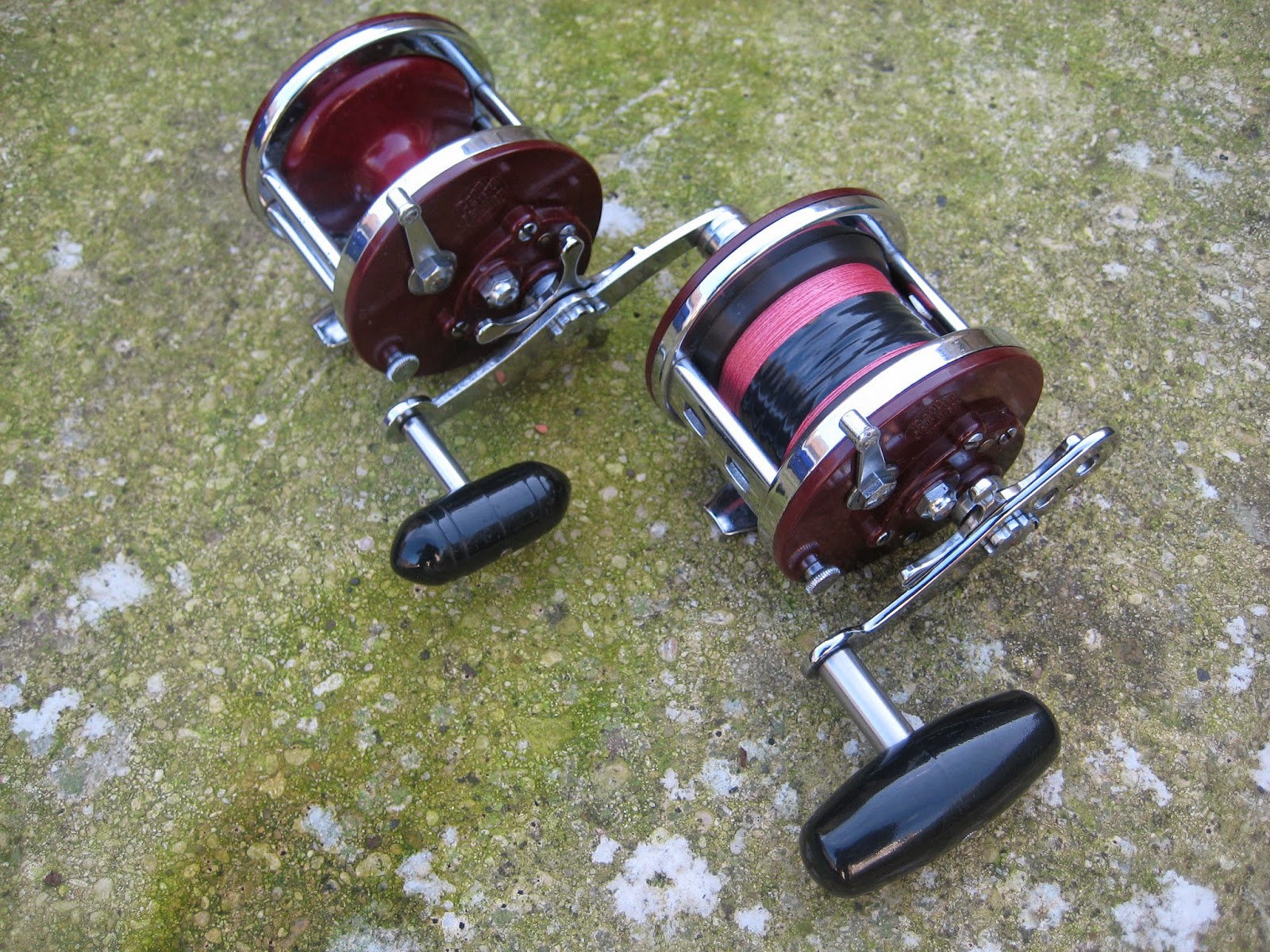 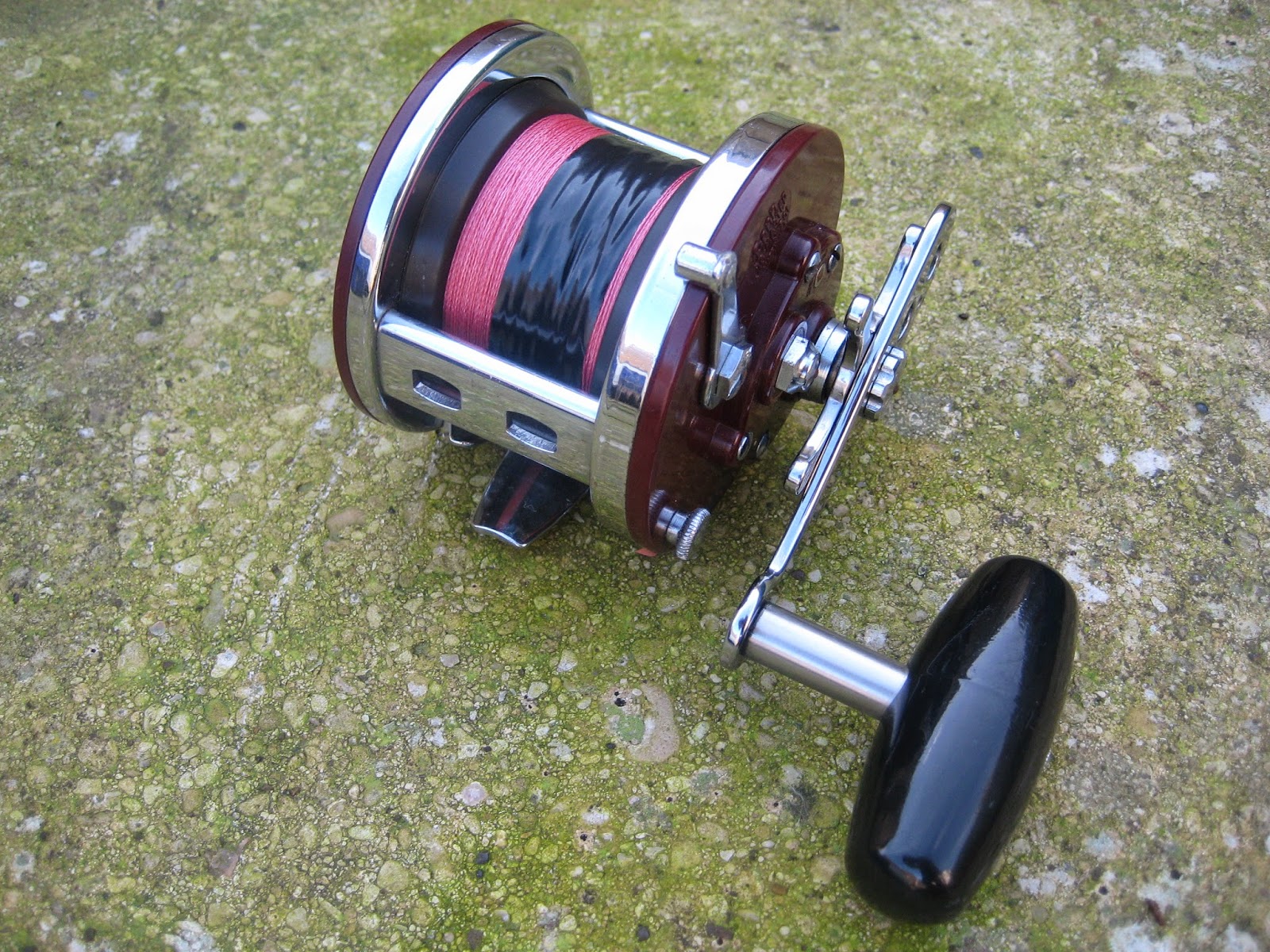 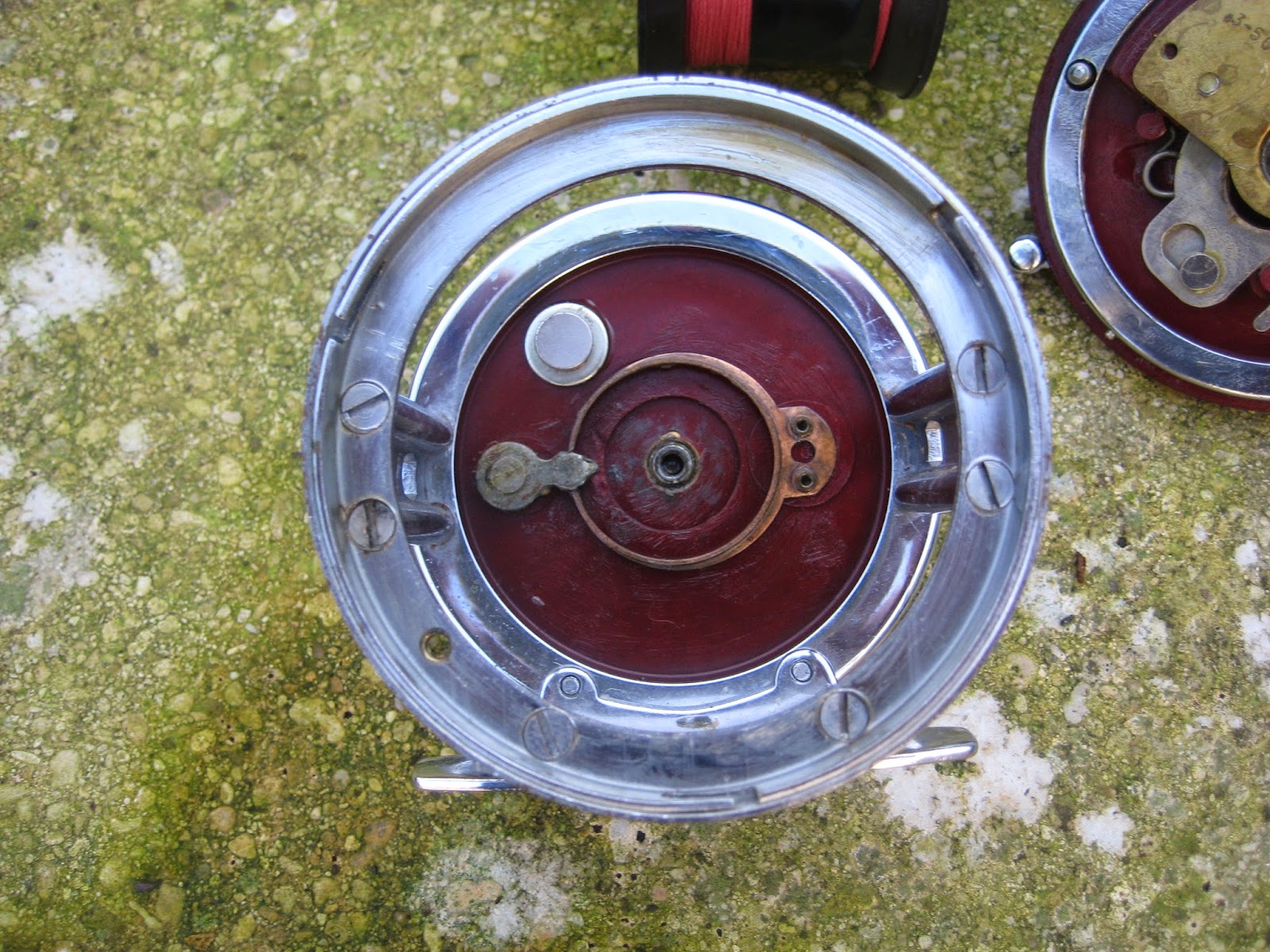