..........to catch a cod. At least that's what Dave had told me when he mentioned that he'd been given his orders by his better half to come home with some dinner......preferably a cod.
Again, not a very productive day at sea at all whilst others fared much better than us but that, as they say, is fishing.
Certainly no cod graced Jupiter's deck, and it was a struggle to find anything other that the ubiquitous cat sharks,  the odd whiting and a fat pouting, despite working very hard trying three different marks.
A few cod were caught by boats on other marks but as is the norm, perhaps two or three fish constitutes a good day on the specie in our area. I do wonder what the cod fishing on general ground marks was like in my local area in days gone by.
Talking of the past, with so little to report in this blog entry on the fishing front perhaps it would be an opportune moment to mention a spin off  hobby of mine-my love of old reels.
Here's a piece I did for the Vintage Tackle forum on WSF;

Penn multipliers or 'conventionals ,' as they're known in their country of origin, have been a part of the worldwide sea fishing scene for many decades. It's remarkable to think that the Senator model first appeared in Otto Henze's Penn catalogue in 1936, and remains in production to this day.
What's also remarkable is that current Senators are little different from those of nearly eighty years ago, and indeed many of the parts are interchangeable.
Classic Penn multipliers are very simple machines indeed. Most follow exactly the same basic design, in a variety of sizes, and usually comprise only about fifty component parts which makes them fiendishly easy to strip and service. Early Penn literature, included with each reel, explained the full strip down procedure and service in intricate detail.
AS they tended to be constructed using high quality materials and components, they to last a very long time indeed, although due to  long production runs with only minor changes in specification, most spare parts are still available today in both the U.K and U.S.A if required.
Across the pond they , naturally, still have an enthusiastic following for classic Penn products and many reels are customised or 'hot rodded' with some quite outstanding results.
Senator reels are almost synonymous with Big Game fishing across the globe and hold more IGFA records than any other reel. They have been made in a huge variety of sizes from a 1/0 (which is about the size of a Mitchell 602) all the way through to 16/0 and above though nowadays the range is much smaller.
When I started shark fishing I was looking for a reasonably economical way to equip my boat with the necessary sets of gear and used U.S built Senators fitted the bill admirably. All of these reels were purchased quite cheaply, some for as little as £20, cleaned, serviced and occasionally upgraded with some modern parts. Two of the black models date from the sixties.
In the eighties Penn introduced their HT100 carbon drag disc material and all of my reels have been upgraded in this way resulting in very smooth but powerful drags.
The eagle eyed amongst you will also notice that these reels are left hand wind and on a couple , the conversions were carried out myself with readily available parts.
The black reels are 6/0 plain bearing 114s used for porbeagle sharks and would probably cope with anything swimming in U.K waters whilst the smaller red 4/0 113H ball bearing models are used for blue shark.
O.K they are a little on the heavy side and aren't particularly refined compared to modern lever drag reels but they've all proved their worth on several shark and will , I imagine, be capable of providing sterling service long after I've gone. 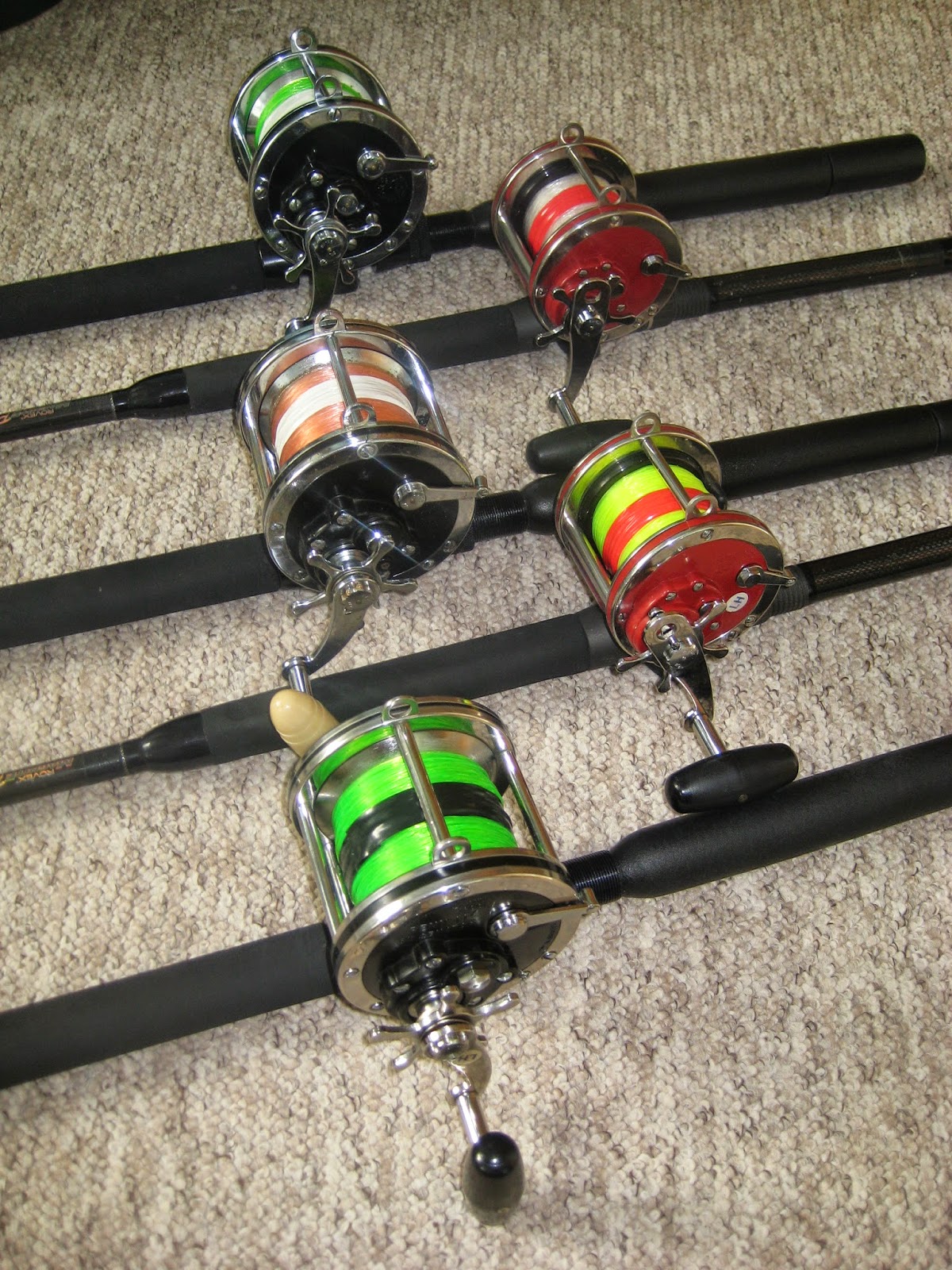 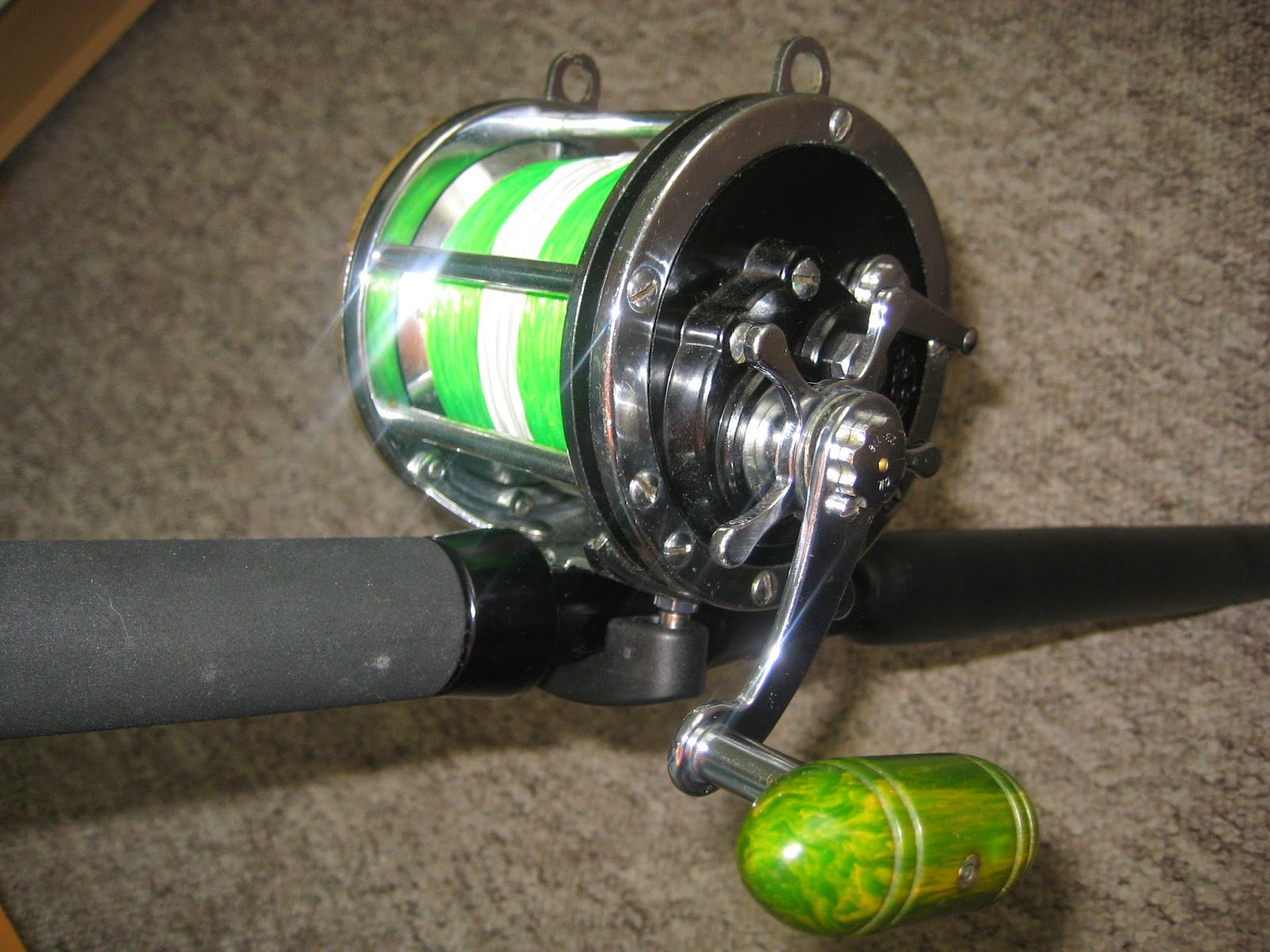 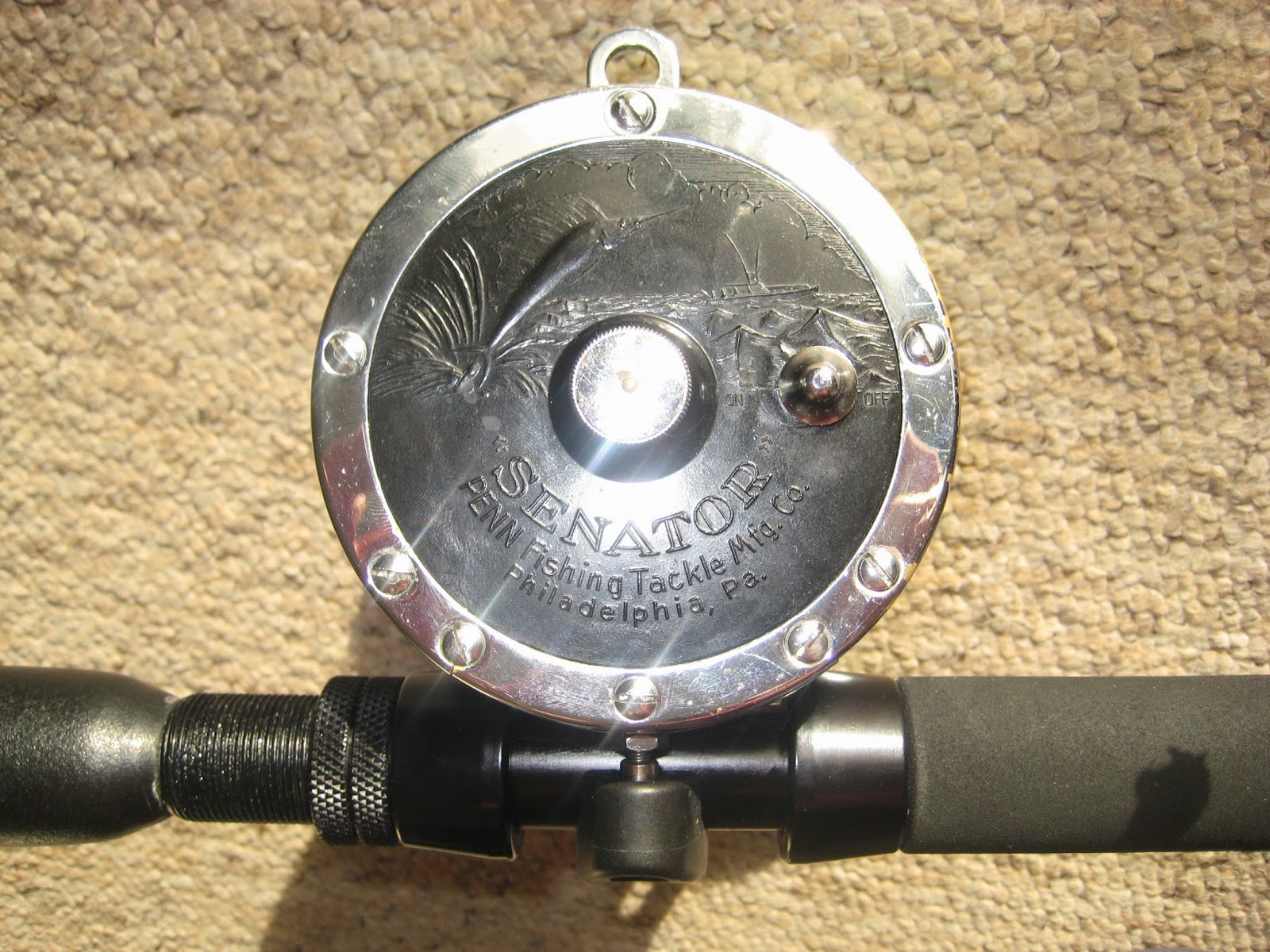