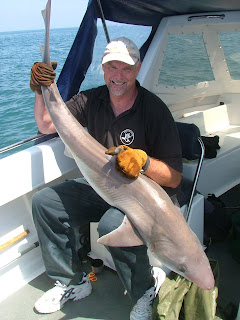 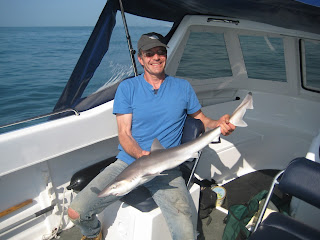 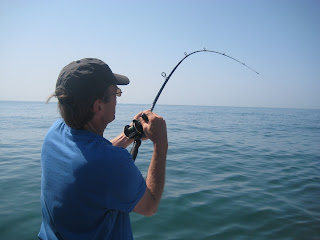 With small tides(4.8m) and perfect weather  I went in search of tope again, this time, taking my mate Simon along for the ride. Starting at 0700 gave us a full days fishing on the usual mark and even the mackerel were plentiful finding them in good numbers just beyond the Owers reef.
The tope kicked off from the start although most of them were smaller pack fish.
However, a few bigger fish began to show up as the day progressed. At one stage, we both had fish on at once. Mine hit the surface first and, wanting to give Simon a good look at her, especially as he'd not seen a tope quite as big before, I held it on the surface whilst he dealt with his fish.
Unfortunately, this was a mistake. The tope, probably a mid thirty, gave a hard kick and snapped my precious 30lb class Suveran clean in two.
The leader must have chafed against the break because that parted too but luckily I managed to hold on to it and successfully T bar the fish free.
Soon after came the biggest fish of the day again to my rod, a tidy fish weighed in at 49lb and still the tope came.
In the end it became a numbers game as we passed 30, then 40 and finally reached the 50 mark before calling it  a day. Once again the fresh mackerel ran out and some back up frozen continued to do the business.
Fantastic fishing and Simon loved every minute of it.

I'm currently reading 'Sharks In British Seas' by  Richard Pierce which I highly recommend to anyone interested in all species of shark and in which the tope, is also known as a ' soupfin shark'. A rather more interesting name for the specie but one also, that gives us a clue to its unsavoury use as a luxury food source.
Posted by Unknown at 14:32