I cannot complain. I've had some extremely exciting fishing of late and have been very lucky with my catches but, sooner or later, something had to give.
The first day i set aside for a solo trip to try for a bass. Usually, I prefer to tackle bass alone, mainly because it takes a lot of patience and I'm a long way from getting anywhere near consistently catching the buggers. Drifting live mackerel was the method of choice and despite easily finding enough good baits to fill the tank along with a pollack which very nearly joined them, I failed miserably on the chosen target.
Now, Its likely that I may have scared any resident bass on the reef away by motoring, unintentionally of course, over the shoal.
Neil turned up later in the afternoon to drift for bass with lures and, if anyone could find them, he could......but he failed too.
I took Dave Nevatt with me on the second day starting at Smooth hound bank, but there were no smoothounds.Moving over in between the 'two fingers' which, despite being highly recommended as a ray mark,didn't produce rays, trying Phil's mark which did give us a thornback and ending up North of the 'stick' which gave us an undulate and some bait nicking bream. Dogs and a hound did show up, as well as a gurnard for Dave but,despite catching quite a few species and getting constant bites, the fishing wasn't brilliant. 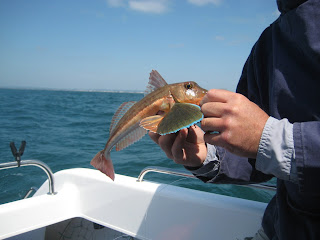