Brian's a good mate of mine, and a neighbour at the marina. We seem to have similar ideas about fishing probably because we both come from a coarse fishing background. Brian's playground was formerly the River Arun where he's had considerable success in the field of match angling.
I've only been back from Cornwall a day, and that day was spent cleaning up the boat and getting her back on the mooring. With the weather set fair for the morning, it was rude not to go fishing although, after the intensity of the sharking, I fancied something a little more relaxing.
Although clear just outside the harbour, the weather soon turned foggy and the temperature dropped enough for me to don my floatation suit jacket.
Shorts and crocs on the bottom half of course.
Initially, we headed to the Pine wreck but the only thing that showed the remotest interest in our shads and sidewinders were pout.
A dive boat appeared out of the murk, and that was our signal to up sticks and move on although, they were polite enough to ask if they would be disturbing us which is unusual and considerate.
I wanted to show Brian my 'half way' mark and see if there were any tope and hounds about but before that, we needed some mackerel.
It didn't take long to collect enough for hook bait and in amongst them a lone sardine turned up. A first for me that tasted absolutely spectacular grilled on toast for the following day's lunch.
We settled on the mark just as the tide started to make and a steady stream of pack tope came to the boat along with a nice double figure hound for Bri, which were great fun as we'd both downsized to 6-12lb outfits to make the most of the sport.
Brian was really enjoying himself.
This mark has produced a BIG tope for me-about two years ago, so I felt there was always a chanc e of something special turning up.
The wind speed increased dramatically as the afternoon progressed (it was forecasted)and with a bumpy sea, came some anchoring problems. On three occasions my anchor was tripped and despite paying out extra line, on a fourth occasion the anchor actually lifted, I suspect assisted by the Alderney buoy and the fact that the sea bed was probably quite soft.
I wasn't the only boat suffering. Several boats on the radio were experiencing similar difficulties. When the spring clip holding the buoy to the ring accidentally opened, and we had to manually haul the anchor before chasing the buoy down tide, we called it a day and headed for home at a steady 14 kts.We'd had a good bag of tope anyway.
A rogue wave, caught broadside just outside the river entrance caused Jupiter to heel at quite an alarming angle but, the  boat could handle it despite both of us giving each other one of those simultaneous 'looks' as one does.
A thoroughly enjoyable days fishing with good company. 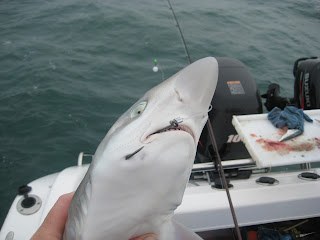 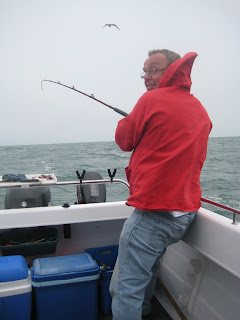 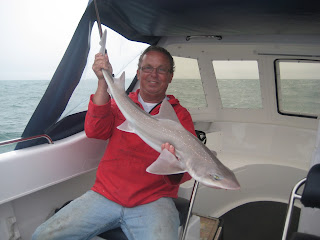