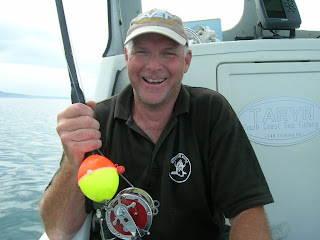 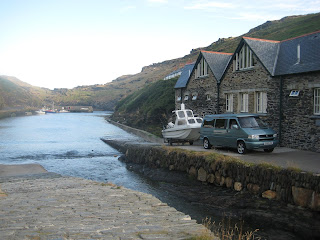 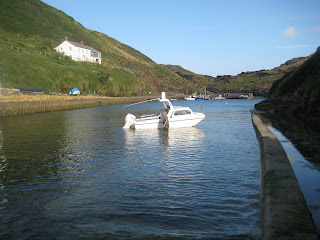 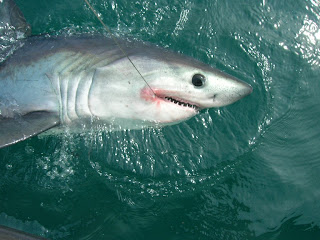 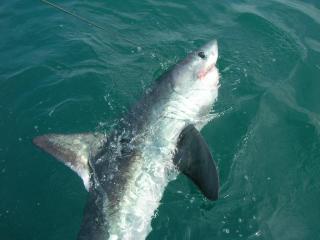 I can only describe the fight as 'dogged'. Not a fast moving creature but ,I got the impression that this fish really did not want to submit and indeed, during the battle which lasted about 45 minutes I had the wind on leader on the reel, and the shark up to the boat on three separate occasions before she was even showing the first signs of tiring.
Each dive was a battle of wills, with me applying as much pressure as I dare and,  my back, would take.
Eventually I persuaded her to the surface, but the dual was far from over.
She simply could not, in typical female fashion, decide which side of the boat she preferred,  taking me under the hull and nail bitingly close to the outboard prop on several occasions, until we eventually decided to lift the engine to prevent a catastrophe occurring.
Finally she tired enough for Wayne to be able to safely grab the trace with gloved hand , restrain her for a few seconds on the surface with film camera running, whilst I slackened off the clutch, just in case , and feast my eyes on the fish.
In stark contrast to the 'pretty' and sleek blue shark, what confronted me was an  aggressive looking creature with a portly body, and a short stumpy snout incorporating a huge inky jet black seemingly staring eye, and a ragged set of teeth to match.
A real powerhouse  of a fish clearly, a close relative of the infamous 'great white' shark. She was quite literally, breath taking and sadly, the pictures do her no favours.
There was absolutely no way this one was coming on board and, with the hook clearly inside the mouth, once she was judged to be recovered, it was decided to snip the trace cleanly with wire cutters and set her free.

Watching her kick her tail strongly, and disappear safely to the depths in the gin clear water is an image that will remain permanently engraved in my minds eye- a fantastic fishing moment indeed.
I've caught bigger (bronze whaler) shark from a Namibian beach but, as with the blue shark in June, this porbeagle meant so much more. All the research, preparation and effort that Wayne and me have put in to these trips with our own boats came to fruition once again.
Estimated at 150lb, in the grand scheme of things not a particularly big shark but, It was plenty big enough to give me a run for my money. I beat it, but it beat me up a bit in the process.
Quite how Wayne coped with last spring's porbeagle of at least three times the size , I'll never know. All I can say is; 'the man's a hero'.
For the rest of that day we continued to drift the mark and must have completed a dozen or so runs. Although I didn't admit it to Wayne at the time, I was desperate for him to get his own shark but it just wasn't to be.
The only other shark encounter we had was when a porbeagle followed and grabbed a hooked tope of about 20lb on Wayne's rod only letting go about 20ft below the surface.
The tope did indeed, prove to be a nuisance and we lost count of how many we caught and they weren't all pack fish. Wayne caught one of about 30lb, a decent fish back home, but not what we'd come for.
As the day progressed, our precious supplies of pre -made chum thawed , and dispersed too quickly out of the bucket for our liking. We tried hard to supplement the mix with chopped mackerel, but they proved more than difficult to locate and catch and, by late afternoon ,we'd run out completely and our chances of seeing another shark were severely curtailed.
Nearly ten hours after catching that porbeagle, it was time to head for home, the Flyer living up to it's name by skimming effortlessly across a flat calm sea punctuated by the gentle rolling swells, and the odd porpoise with calf in tow. What an atmosphere.
Having become experts over night, the approach to the harbour, and recovery of the boat were successfully negotiated without incident this time around, and we set off for the 200 plus mile drive home into the small hours of the night ,armed with a great deal more knowledge that we'd had 48 hours previously.
We will be back....and, we don't need a bigger boat!